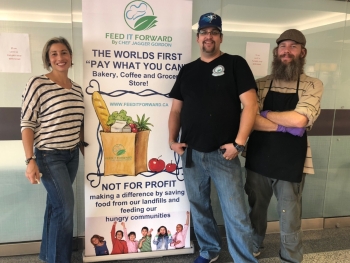 Canadian executive chef and caterer, Jagger Gordon created the Feed It Forward community food program to solve land waste issues and feed the hungry and is launching a Christmas Day dinner to families in need.

Gordon, who also created the Feed Families freezer program wants the current Canadian legislation to follow France and Italy’s lead in dealing with food waste. Retailers and restaurants are prohibited from donating nutritious and edible food that nears its labelled expiry date. According to Gordon’s philosophy, hungry bellies remain empty as our landfills continue to grow, and he wants Feed it Forward to change this.

The Toronto-based charity has been petitioning the Canadian government to follow France and Italy’s lead to make it illegal to discard food fit to consume, so we can start to feed those in need instead of putting food to waste.

Gordon had launched his food-saving initiative in 2014. Adam Spencley a chef with Jagger Gordon Catering added that there was “copious amount of food going to waste following every catering gig he hosted,” so the catering team experimented with a pop up kitchen in Trinity Bellwood Park. They served over 300 meals with free food that would have otherwise been destined for a landfill.

He and his catering company initiated another charity lunch on October 22, 2018, raising money for Feed it Forward, while offering a nutritious soup made of rescued food, to the residents of Gordon Baker Road’s office building. They raised awareness of what they do, chatting with office workers while serving pumpkin and lentil soups, made from rescued pumpkins.