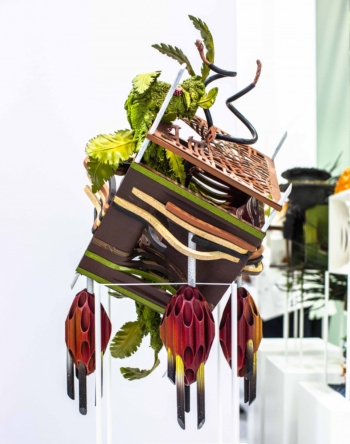 The World Chocolate Masters 2018 competition has come to an end, and the winners have been declared.

The international competition among the world’s best chocolatiers took place between October 31st through to November 2, 2018. The first place winner is Elias Läderdach of Switzerland. Second place winner is Yoann Laval, of France. Florent Cheveau from the U.S.A. took third place.

“Futropolis” was the theme for this year’s event, and there were various divisions for the competing chefs and chocolatiers to display their expertise. The winners for the World Final Assignments were as follows:

For the Best Chocolate Snack To Go: Elias Läderdach won again. His dessert was called “Urban Leaf,” and used a biodegradable, cocoa shell packaging with an irresistible combo inside:A fresh chocolate yuzu boost combined with superfood sablés made of wheatgrass. It was paired with crunchy baked & lightly spiced almond and cereal tuilles, topped off with cacao nibs. It was complimented by a drink made of guava, turmeric with a dash of yuzu juice.

Best Chocolate Travel Cake: Barry Johnson, representing UK. This creation was a modern take on the British classic Battenburg cake, modern, hexagonal look. The best moulded chocolate cake was awarded to Elis Läderrach again, for his leaf-shaped chocolates that were gilded and brought a modern twist that melded the futuristic look of metallic paint to the gentle, natural curves already found in nature.

Best Fresh Patisserie of Futropolis went to Florent Cheveau of the U.S.A; His creation, called “Instant CH3” was a domed chocolate tart that paired hazelnut flavour with mango, lime, chili and passion fruit.

Tor Stubbe of Denmark was award for best “Or Noir” Chocolate tablet of the Future award with his daisy-shaped creation. The public award for “Chocolate Lovers From Around The World” was awarded to Yassine Lamjarred of Morocco.