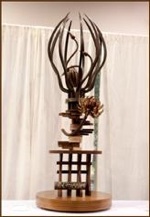 Runners up included Frederic Loraschi, chocolatier and owner of Chocolat Frederic Loraschi in Hummelstown, PA, and Stephen Durfee, pastry chef instructor at the Culinary Institute of America at Greystone in St. Helena, CA.

The final was held during the International Baking Industry Exposition in Las Vegas. During the two-day competition, participants drew inspiration from the Aztec legend of the origins of cocoa in South America to create a chocolate sculpture in the theme of “Cocoa, Quetzalcoatl’s Gift.” They also created chocolate entremets, two types of pralines each and plated desserts.

A professional jury, which included former U.S. national chocolate masters Lionel Clement and Vincent Pilon, judged the competitors on their overall technical skills, interpretation and execution of the theme demonstrated by their artistic showpiece, and the taste of their entremets, and dipped and moulded pralines.

As the winner of this year’s American final, Bortolini will represent the U.S. at the 2011 World Chocolate Masters competition in Paris. He will compete against chefs from 17 other countries, including Belgium, France, Switzerland, China, Australia and Brazil, for the title of “World Chocolate Master 2011” and a share of the prize package, valued at approximately US$130,000.