Flour bags are honoured as pieces of beauty and inspiration at a new German museum. 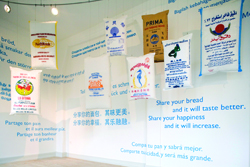 Flour bags as works of art?

That’s just what they’ve become in Wittenburg, Germany, where the world’s biggest collection of flour sacks has finally found a home. Over 1,600 flour sacks from some 110 countries are now on display at the world’s first flour art museum.

The idea first originated 10 years ago when Volkmar Wywiol, the owner of flour company Mühlenchemie GmbH & Co. KG, was walking on a beach in Dubai and stumbled on a flour sack from one of his customers that had washed ashore. Covered with illustrations and motifs that speak of the significance and symbolism of wheat, the bag struck him with its uniqueness and beauty. Ten years later, that first original bag plus hundreds of others now have a home.

“Our customers – millers from around 110 countries – have sent us over 1,600 individual items which we have given a place of honour here,” says Volkmar Wywiol. “We regard this as a tribute to all millers, for they make an impressive contribution to supplying the world’s population with food.”

The motifs on the bags reflect many parts of the history of human civilization. Symbols of the sun and majesty mark out wheat as the “king of the fields.” Muscular men and machines signify that it is a mighty source of energy; historic wind and water mills point to the long tradition of milling.

The first exhibition room of the museum reflects the international significance of flour. Numerous sacks from all the corners of the earth are hung free in the room. The motifs are typical of their country of origin: a camel at the gateway to the Sahara; the 7-star hotel “Burj Al Arab” as the famous landmark of Dubai. On the walls, in 25 languages, is the message, “Share your bread and it will taste better, share your happiness and it will increase.” A map of the world on the floor shows the countries of origin of all the sacks.

The museum’s second room has a mysterious aura to it and introduces visitors to the cultural and religious significance of flour as a basic food. Corn, bread and mills are important motifs in myths, legends and proverbs.
“There are many objects that point to the natural and supernatural world of wheat,” says the curator of the museum, Angela Jannelli. “We highlight 10 of them at the museum, for example we have the Chiwara, a headpiece of the Bambara – an ethnic group in Mali – was once worn by dancers at farming rituals. A Mozart wig illustrates that wigs used to be dusted with flour to keep them white. The Moulin Rouge, probably the world’s most famous windmill, proves that mills have an erotic history too. And Charlie Chaplin’s bread-roll dance from the film The Gold Rush is humorous evidence that rolls can be transformed into the shoes of a ballerina.”

The journey through the museum continues into a room dedicated to the flour sacks and their symbols. The motifs on the sacks are divided into three groups of symbols.

“In my months of preparation and research for the opening of the museum I discovered that many of the motifs on the flour sacks have to do with the same topics. We encountered three groups of symbols: the sun, strength and tradition,” explains Jannelli.

Many of the motifs focus on the sun as a symbol, because, like wheat, the sun is basic to human lives. The lion as the king of animals represents the sun’s claim to regal power; the cock stands for life and fertility, and wheels, disks, and ears of corn arranged as a wreath are all references to the splendour and radiance of the sun.

The motifs representing strength emphasize the function of wheat as a source of energy – the strength concealed in the kernel. On other sacks, the Greek deity Atlas carries the whole world on his shoulders, an athlete tears heavy iron chains apart, a powerful steam locomotive comes rushing towards the spectator, and a computer from India stands for the concept of progress, the strength of unlimited ability to calculate.

The sacks in the third group immortalize the heroes of flour production and processing. Millers, bakers and housewives are to be found, along with pictures of golden wheat fields and ancient wind and water mills. They are references to the long tradition of wheat growing and processing and the natural value of grain.

The next section of the museum is a white room in which visitors are reminded of the importance of white flour as a particularly valuable and spotlessly pure product: many of the sacks presented there contain a reference to winter and snow. The motifs show arctic landscapes and polar bears, snow-covered mountains, diamonds and angels. Squeeze the little bag of flour with your hand: you will hear the sound of footsteps in snow.
The heart of the museum is the Sackotheque, in which every sack has been given a place of honour, arranged alphabetically according to the English names of the countries. It is watched over by Demeter, the goddess of fertility, created out of over 10,000 nylon strings woven together by the Berlin artist Kathinka Willinek.

In the last room, visitors are given a final greeting by the Kleiekotzer, or “bran puker.” Yep, you read that right. This is a gargoyle-like mask that was attached to the flour bin in which the grain was being ground and which would eject the sifted bran out of its mouth. “Their eerie, demonic features were said to frighten off evil spirits,” says Jannelli. “But here at the museum the Kleiekotzer just serves as a talisman to bring visitors ‘good luck’ from all the millers of the world.”

Interested in finding out more about the museum? Please visit www.flour-art-museum.de .