How a newly opened northern New Brunswick bakery set up shop and attracted a pair of husband and wife bakers from France.

If you follow the New Brunswick coastline north, you’ll eventually hit the Acadian Peninsula. Keep driving, another hour or so, through pristine, well-kept Acadian towns and villages and you’ll come to the town of Caraquet, at the northeastern tip of New Brunswick on the Chaleur Bay. Known as the capital of Acadia, Caraquet was established in the 1750s by Acadian settlers who were victims of the British deportation in the south. Although it has its roots in Acadia, Caraquet is a Micmac term which means, “the meeting of two rivers.”

It’s there that you’ll stumble upon the newly opened Boulangerie Grains de Folie, housed in a massive century building that it shares with a yoga studio, a tiny, but well-stocked bookstore and an épicerie fine (fine grocery store) featuring both local and imported products. With its wooden trim, screen doors and colourful window boxes, the bakery looks right at home in the century-old building, exactly what owners Lorraine Haché and Claude Bergeron worked long and hard to do.

After growing up in the area, and moving away to live and work for some years in the southeastern New Brunswick city of Moncton, the pair made the decision to return to Caraquet. Both had extensive experience in the human resources field, and Haché had also taught at the University of Moncton (where she continues to work, now at the university’s campus in Caraquet). When they returned to the Acadian Peninsula, Haché says they missed one thing: good, crusty, European-style bread.

“Every time we travelled, we were drawn to small bakeries and cafés,” she says. “When we lived in Moncton, we were used to buying bread from the market there and when we moved back here it was difficult to return to regular grocery store bread.”

And so, without any kind of baking or café experience under their belts whatsoever, the two mused about setting up a bakery, a European-style one that could supply them with the kind of bread they’d become accustomed to. They bought the century-old building, with thoughts of a bakery and also a yoga studio (one of Haché’s many hats is also that of yoga instructor), which required much updating and retrofitting, but Haché and Bergeron loved its historical aspects and insisted on keeping many of its original features, including a beautiful tin ceiling. After being told a firewall was required in the ceiling for insurance purposes, the contractor the pair hired carefully pried off each tin tile, numbering every one of them to be able to put them back in exactly the right place. They also brought in local set designer Luc Rondeau to create just the right atmosphere for the bakery.

“What we wanted was a warm, homey style where people wouldn’t feel rushed,” Haché explains. “We definitely didn’t want a fast-food type of place.” 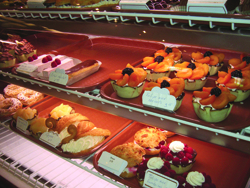 Gleaming wooden floors, wooden tables like you might find in a family’s kitchen (including mismatched wooden chairs), wooden railings and wooden beams all complete the warm, comfortable feeling Haché and Bergeron were looking to create.

Next on the agenda? The big task of actually finding bakers to fill the bakery’s display cases with breads and pastries and croissants. When Haché’s son expressed an interest in learning how to bake bread, he went to a Quebec college to seek training. It was around the same time Haché and Bergeron received a call from town officials. And this is when Caraquet, besides being the “meeting of two rivers,” also became a meeting of two worlds.
Let’s travel, for a moment, to Rouen, France, where husband and wife team Isabelle and Didier Goulier were running their own bakery. Didier, with 30 years’ experience as a baker and pastry chef, happened to hear a news story on the local radio station that government officials from Canada were in the area, giving presentations on immigrating to Canada. They were specifically looking for bakers. His curiosity piqued, Didier made some phone calls, finally speaking with immigration authories in Fredericton. They put him in touch with a bakery owner from Moncton who had been on the recent trade mission to France (along with town officials from both Moncton and Caraquet) and who was looking for a baker, but someone with a little less experience than Didier (and who might not expect the same sort of compensation). Moncton town officials then contacted Caraquet officals, explaining the situation. Haché and Bergeron just happened to be working on getting all of the required permits at the time, and when they heard a baker from France was interested in finding work in New Brunswick, they jumped at the opportunity. The Gouliers came to visit Caraquet in the fall of 2007, and, with their sense of adventure sparked, agreed to come back in February, this time for good.

“We wanted a change of horizon,” says Didier.

Besides the new horizon, the pair have also had to become used to other changes, from the pace of work (“The rhythm of work was much slower,” says Didier. “There’s a very nice quality of life here.”), to the Acadian accent (very different from French accent), to the ingredients (common Canadian ingredients like blueberries and cranberries are not so common overseas), to the grocery stores.

For the first little while (until Haché’s son finished his training in Quebec), Didier and Lorraine made all of the products for the bakery, including breads, pastries and vienoisseries. Although many of the formulas required some adjusting (mostly because of the difference in flour strength), Didier says the transition was smooth for the most part, and the bakery opened full time on Feb. 21 of this year.

Overall, the pair has settled in well to the community. Their son just recently arrived for a visit and they now own a car and a home in the area. I ask them how long they think they’ll stay.

“We just arrived,” Didier says with a smile, “give us some time.”

The bakery’s name, “Grains de Folie,” means a streak of madness, exactly what seems to have transpired in this small northern New Brunswick town, with a series of events Bergeron and Haché could never have foreseen when they first set the wheels in motion to open a bakery. But it worked. And the pair has high hopes for the future.