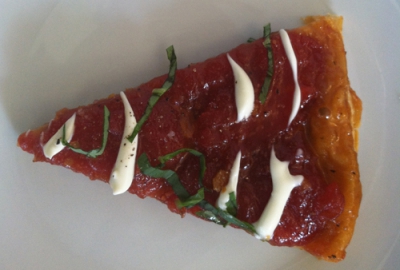 Blanch, peel, quarter, and seed tomatoes. In a nine-inch ovenproof skillet, combine butter and sugar. Add tomato quarters, rounded side down and cook over medium heat, turning tomatoes occasionally until they are crisp-tender and look caramelized, 20 to 25 minutes. With a slotted spoon, gently remove tomatoes to paper towels and set aside to cool slightly. Cook syrup in skillet until it thickens but doesn’t caramelize, about five minutes. Set skilled aside until syrup has cooled enough to work with, about 10 minutes.

Preheat oven to 425 F. Meanwhile, in a small bowl, stir together lemon juice, vinegar, vanilla, salt and finely ground black pepper. Arrange the tomatoes in the skillet rounded side down. Pour lemon juice mixture over them and top with the puff pastry. Cut three slits in the pastry. Bake tart until puff pastry is golden brown, about 20 minutes. Remove to a cooling rack and cool 10 minutes. Loosen pastry from edge of skillet. Place a plate over the skillet and using oven mitts to protect hands from hot syrup, invert tart onto plate. Serve warm garnished with créme fraiche, basil, cracked pepper and fleur de sel.