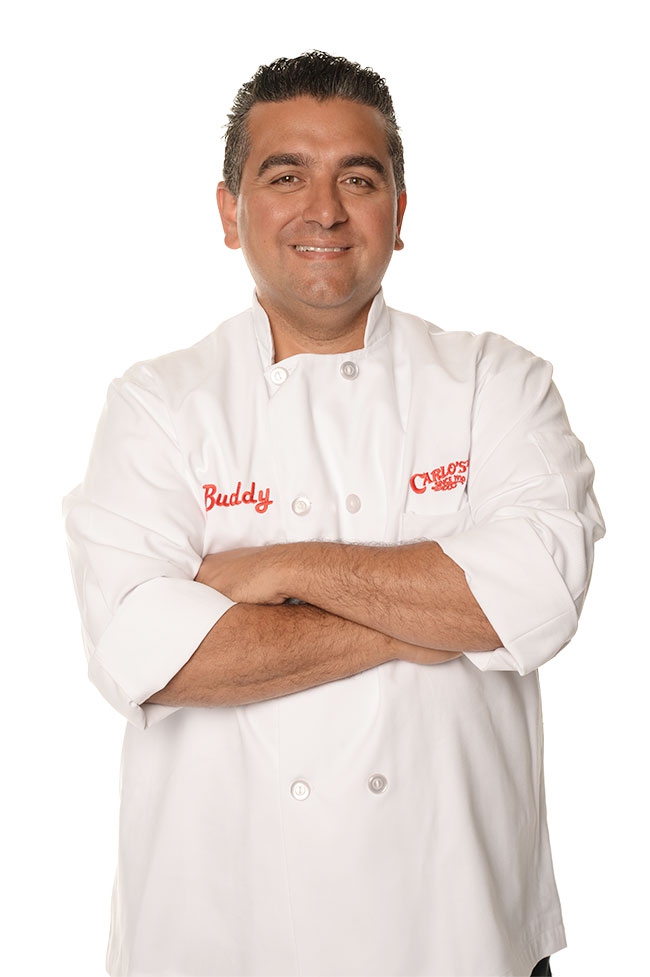 Buddy Valastro needs no introduction. But just in case you’ve been living under that proverbial rock, the 38-year-old founder and star of the hit reality series Cake Boss, now in its seventh season, runs Carlo’s Bake Shop in Hoboken, N.J., along with his siblings.

The bakery has become a huge tourist attraction and Valastro has gone on to publish a couple of books and create several spinoff series, including Next Great Baker, whose most recent winner, Lia Weber, is now AB Mauri North America’s baking ambassador and appeared at Bakery Congress 2015 in Montreal.

Valastro is one of several guest stars – including Roland Mesnier and Ron Ben-Israel – appearing at the Americas Cake & Sugarcraft Fair, hosted by Satin Ice, Sept. 18-20 in Orlando, Fla. Prior to the fair, Bakers Journal had the privilege of obtaining an exclusive interview with Valastro, excerpts of which appear below.

Bakers Journal / How did you get the nickname “Cake Boss”?

Buddy Valastro / I got it when the show began. I was skeptical at first. I didn’t want to come off like a jerk – like I was better than everyone else – but it shows who I am in a true light. Now, I couldn’t think of being anything else but that.

BJ / How did you come up with the idea for the TV show Cake Boss?

BV / I always thought it would make a great show – to follow me and my family, my big crazy family – and these giant crazy cakes. I would go to work every day and laugh, and think, “There is something here,” and I still do. It’s a fun place to work.

BJ / Were you prepared for how it became so popular so quickly?

BV / Honestly, I thought the show would do well, but I didn’t think it would do as well as it did! Especially internationally. Sometimes I pinch myself. I’m truly blessed. There have been some growing pains, but there is a lot more positive than negative. I don’t mind taking pictures with the fans or signing autographs. I’m still a regular guy and I remain humble with everything that’s going on around me.

BJ / How do you balance your time between running the bakery and running Cake Boss and its spinoff programs Next Great Baker and Buddy’s Bakery Rescue?

BV / We take it one day at a time, one project a time – with whatever I’m doing: my bakery, my show, my wife, my children – and just make it work. I’m a busy guy. I’ve always been – I’m a great multitasker. It just works.

BJ / What are the advantages and disadvantages of a family-run bakery like Carlo’s Bake Shop?

BV / Having it run by my family, nobody’s going to want to work harder or put in more time; they feel so connected to it. But the problem is, they feel almost too connected and they take it too personally – business is business and sometimes you need to separate the two. Overall, it’s more positive than negative.

BJ / Are things different around the bakery when the cameras aren’t rolling? Or is the show a pretty accurate depiction of life at Carlo’s?

BV / The show is pretty accurate with what happens – it’s the same staff, same people, but when the show is filming, I have more time in the kitchen just because I make a lot of the cakes for the show. The show is all about me making cake, but in day-to-day operations, I do about 60 per cent of the cakes, not 100 per cent. I still do it not because I have to, but because I love it. Loving what you do is a recipe for success.

BJ / How did you become involved in The Americas Cake & Sugarcraft Fair hosted by Satin Ice?

BV / : I’ve been using Satin Ice since Kevin (O’Reilly) opened the business! Going back years and years, Kevin was the first guy to bring fondant into our bakery; he brought it to me and my dad. We’ve remained friends over the years, and we’ve been having conversations about hosting a show for a very long time. This is the first American cake show of this size and I thought it was about time that we had one here. I really feel that Cake Boss has helped the industry and I’m proud of that. Appearing at The Americas Cake & Sugarcraft Fair is my way of giving back.

BJ / It’s a brand-new show so what about it convinced you it would be a good show to appear at?

BV / These are conversations me and Kevin have been having for years – changing the market for cake and fondant and what’s going to be the future. The show is a way for bakers, pastry chefs, and sugar artists to come collaborate. This show is about coming together, sharing ideas, tricks, learning and helping each other. I want to be a part of that.

BJ / What do you plan to talk about at The Americas Cake & Sugarcraft Fair?

BV / Honestly, I don’t know yet. I want to go there with an open mind to let the audience ask me questions – whether they want to know about “Cake Boss” and my story or about wedding cake trends; I want to be there for them. I want to let people know what I’ve learned over the years and give them my spin on things.

BJ / What products and/or techniques do you plan to demo at The Americas Cake & Sugarcraft Fair in September?

BV / Way too early! I don’t know what I’m doing tonight! I like the challenge of going up there and doing whatever they have in store for me. If there’s a piping bag, I’ll pipe; if there’s fondant, I’ll roll it.

BJ / What are you most looking forward to at the show? Any features that you’re excited about?

BV / Just getting together with the bakers and the fans and letting them know who I am and inspiring people. I love to solve problems and talk about issues going on the in the baking community and talk trends.

BJ / Do you envision a day when you’ll go back to just being a baker, or do you plan to keep working in television as long as people want to watch?

BV / : I don’t know if that ship sailed out too far already and if I can ever just be a baker. But I am a baker from Hoboken, N.J. That’s who I am in my heart – who I’ll always be.

BJ / What bakers or pastry chefs do you look up to?

BV / The biggest inspiration in my life was my dad. I also admire many bakers and pastry chefs. Ron Ben-Israel, who is also going to be at The Americas Cake & Sugarcraft Fair, is not only a good friend, but an amazingly talented cake baker. I’ve definitely always looked up to Ron. We did demos before I was even the “Cake Boss.” It’s a tight-knit community and we have a lot of respect and admiration for each other. Betty Van Norstrand gave me the only lesson I have ever gotten. It was a sugar flower lesson for three days at her house. She’s amazing, and she will be teaching her flower techniques at the show, too!

BJ / You’ve been working at Carlo’s Bake Shop since you were 11 years old. Did you ever consider a different career path for yourself? If so, what was it?

BV / No, I was lucky enough to find my dream job when I was young. I was good at it, I loved it and that was it.

BJ / What advice do you have for bakers, pastry chefs, and cake artists?

BV / You can’t give up. You gotta inspire from your surroundings. Don’t be afraid to ask for help. Stay true to your recipes and the way you do things. And it’s not only about being talented, it’s about you becoming a part of a community and socializing with the people. It’s as important for you to have a great personality and make people want to come back to you to make their cakes as it is for you to be talented. / BJ