How a Halifax bakery brainstorms their way to success, and found themselves the subject of a Canadian documentary series. 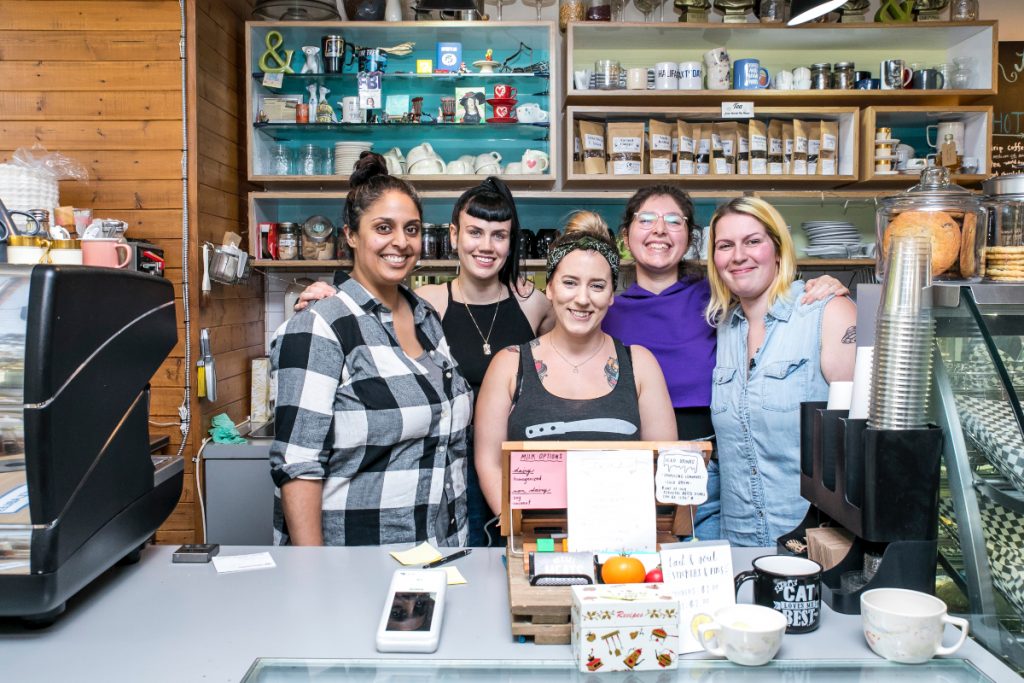 As many bakers can attest, business and friendship don’t always mix. For Saf Haq and Lisa Brow, their bond helped them start and grow their Halifax bakery, Tart & Soul Café . For bakers who just started their entrepreneurial adventure in 2017, the two were made the subject of a documentary series called, “How She Hustles.” The online series featured Canadian businesswomen, and was sponsored by CIBC and Ryerson University.

Bakers Journal spoke with Haq and Brow about their secrets to success. How did a company that was in business for only three years get to be the subject of a documentary?

Haq explained that a friend heard of the audition call through Twitter, and forwarded the information to her. With a rapid application deadline to apply, Tart & Soul filled out the online application, and days later were selected to participate.

Instead of making either feel competitive towards other entrepreneurs, or isolated from their friends, the documentary helped the two feel like they belong in the business world. “I found it incredibly validating to be part of something that included so many other amazing women entrepreneurs and just being in a space that was so positive and encouraging,” Haq recalls. “When you own a business, you’re basically focused inward and constantly trying to get things done, get things baked, and do your invoices do your paperwork, but it was so nice to be to look up for a second and see that all these people appreciated our story and appreciated what we had done and what we’re doing. Just taking a second to be excited about that and be grateful for what we’ve achieved so far…it was nice to be in kind of a really welcoming, nurturing environment.”

Brow recalls the time after the shoot as one of reflection and inspiration for Tart & Soul. “After we got back, we, I think, had a lot of breakthrough brainstorming too.

We actually are forcing ourselves to sit down and make the time and take the advice of the other entrepreneurs.”

The dynamic duo met in the baking and pastry art program at the Nova Scotia Community College, at the Akerley Campus. They both had a dream of opening a bakery that would be welcoming, and would “remind clients of things that your mother or father would have made you when you were a kid. I think there’s just something here for everyone.”

Haq recommends using your unique style as a brand, and not to follow any current trends. Go with your gut and your personal speciality. “I think you should figure out what makes you unique in the baking world, but also what makes you unique as a business owner, and as an entrepreneur.  Whether that’s having an environment that’s super-welcoming or having a product that’s super unique, or just having a business partnership that’s different than something that’s already out there.

“Lisa and I for example, are best friends and we don’t know that many bakers or cafes that are owned by two best friends so I feel like that makes us super unique and that’s reflected in the vibe of our cafe and bakery.”

Brow shares their business strategy. “Going out and bringing samples around really worked for us to get us noticed, which is like very old school I guess,” she laughs. “But, that’s how we got a lot of our wholesale customers.”

Haq states that it is important to be intuitive as to your business partner’s personality. “Know when it’s a good time to be super chatty, and when’s the time to like put your head down and get your work done,” she advises. “So, the two of us really balance each other out, and pretty effectively, too. For example, if one of us is running and working all over the floor, maybe that’s not the time to brainstorm what we’re doing for our next target. It is just a time to work silently.” She adds, “that’s a true story.”

Brainstorming is one of their key strategies to running their company. In fact, it was one of the earliest steps to creating their company, and their corporate mission. “We at first talked about doing, like, a late night dessert delivery,” Brow recalls. “Mostly, we just wanted to bake for ourselves; something fun and get it out there. So, we did a brainstorming session, prior to the real deal.”

Brow adds, “I kind of wanted to own a café of some sort of sort, of since I got into baking, but I had envisioned moving back to my hometown, which is in rural Nova Scotia near Cape Breton, and creating a country store vibe.” Brow laughs, “Not in the south end of the busy, section of Halifax.  Haq agreed. “I thought I knew that I would be have a café, but once we were in the middle of baking school, it seemed to become more and more of a possibility.” “You know, it’s always daunting for a lot of people when they graduate like, ‘oh God! This is it, this is it…we’re going to start our business,’ Brow commiserates.

“Knowing when the busy times are when the low bar and then that way when you’re thinking about it for the next year: It’s all just right there on my calendar. So I think better ‘Big Picture’ planning is what would help any bakery. When you have time before opening your business, do your planning, because once you’re running all of the day-to-day staff, you don’t have time to sit and do it.”

Both wanted Tart & Soul to espouse the quality of inclusivity. Both women wanted men and women and those who identify as either or neither, regardless sexuality, to feel at home. Haq attributes “being out there and talking to customers and just giving everyone our full attention and enthusiasm,” as one of their keys to success.

“I think The people who walk in every day, are the reason that we’re open,” adds Haq. “Being excited to see people when they come in and remembering people’s orders, and interacting in a friendly way with any person that comes in, is really key to making it an inclusive space, And I would say that’s one of the things that we do.”

Brow adds, “I have to agree: just be warm and welcoming. People love to feel comfortable in a space, and if they don’t, they’re not going to come back. Our place is not pretentious. It’s very down to earth. Everything is homemade.”

What’s in the future for Tart & Soul? “Basically, we’re expanding the cafe, giving ourselves more bakery space, more seating, and we want to do baking classes, especially for kids, but also some for university students and then eventually for adults,” says Haq. “Then we want to hold workshops and have special events here as well. I would say that within the next five years. In terms of expansion, I think we’re definitely going to expand our wholesale offering. Then because we’ll have more room, we’ll have more time to do way more catering and special orders. So rather than a new location, we’ll just wholesale to new places and be available in more places.”

Tart & Soul’s owners have business acumen and wonderful customer service skills; what is the bakery’s speciality? “We do an item called the Bialy, which isn’t really sold anywhere in Halifax, but our spin on it is kind of like a handheld-breakfast,” explains Brow. “So, it’s like a bagel, stretched out with an egg cracked in the middle, double smoked bacon from our awesome butcher, cheddar cheese and then we have a veggie option as well. Those are quite popular, and our giant cinnamon buns as well. And also our granola bars which Saf makes hundreds of every week; it’s probably our biggest selling item in our wholesale department as well.”

Whatever the two young entrepreneurs will take on, there’s no doubt they’ll put their love of puns and baking into their new venture, with all their heart and soul.

Related
Heart and soul of chocolate
Butter Tart Revival
The “tart” of a good food festival
The ONLY baking industry trade show in Canada for 2019!