BAC Bulletin Features Business and Operations Profiles
Why I bake 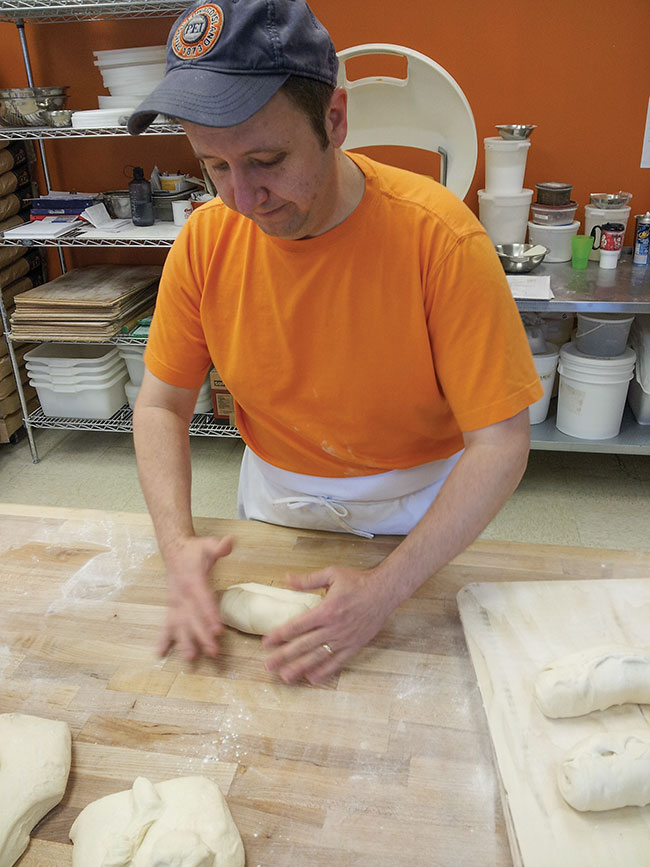 My buddy Martin Barnett of the BAC asked me to write a short essay on why I bake. I’ve been mulling the question over for a couple of weeks now and I still don’t have the perfect answer, but I’m willing to give it a shot. I notice that the reasons have changed over the years.

I got bitten by the Bread Bug when I was working an office job and getting frustrated by it all. Every day was spent either up in my head trying to weave strands of ideas into a strategy or trying to get people to get behind these loosely woven ideas. I needed something to get me out of my head and working with my hands.

Baking was just what I needed, and specifically bread baking. Once you add yeast to the mix, everything expands. Quite literally. This dough I’m working with is alive. I can make suggestions, I might try to set boundaries, but bread does what it does and all I can do is shepherd it along. I love that.

My senses started getting tuned in to what was going on in the bowl and on the bench. Sight, smell, taste and especially touch. My hands became these hyper-sensitive tools, able to distinguish the slightest differences in my doughs, able to lift and turn and stretch the dough without damaging it. As my teacher Steven would say, I was learning to touch without touching.

That might have been enough, playing with the weird alchemy of flour and yeast, getting all my senses tuned to a high level. But then I started giving my bread to family and friends and a whole other world opened up in front of me. The look of joy and gratitude in their eyes when I handed them a loaf was the best feeling in the world. I made these loaves a few hours ago and you love them. And if I sell them, I can earn enough money to do it all again tomorrow. Simple as you like. The instant, happy feedback was intoxicating. Office work was never like this.

Now, asking why I bake is different from asking why I owned a bakery. Owning a bakery is a different equation. More variables are added and when you solve the equation, the result can be much, much larger. We were making a living for our family and our team. We were serving a much wider community. And when the bakery equation worked, we were making an honest, positive difference in the community where we lived and worked. Our neighbourhood was better because the bakery was there.

As I said, owning a bakery is a different equation. You’re playing the game of business in addition to the daily game with flour and yeast. It’s a fun game also, with some overlap with the baking game. You’re still bringing joy to people through good food, but maybe you don’t see it as directly, or as often. There’s always something to pull you away from your customers, if you let it. After several years of owning a bakery, I came to realize that the more time I spent with the people I baked for, the happier I was. My personal equation became simpler.

So that’s why I bake. Pure and simple. There’s no better way to make the people around me happy than by baking for them. The joy of the craft multiplied by the joy of feeding the people I care about is an equation that works for me. And it’s the equation that I miss the most now that I’ve moved to the coast and don’t have the space and tools to bake more than a loaf or two.

P.S. Martin didn’t ask, but a follow-on question is, if I’m not baking for others these days, why am I still involved in the baking world? The answer is part nostalgia and part fascination.

Several years into my baking journey, it hit me that I was part of a tradition of village bakers that goes back centuries. We played our part in that tradition in Saskatchewan and thousands of bakers are playing their part in their communities today and every day. I want to meet all of them. I want to learn about where they live and bake, to hear their stories and to learn about the people they work with and the people they serve. I want to celebrate their existence and help them succeed however I can. And I want the village baker tradition to continue long, long into the future.

Mark Dyck is former owner of Orange Boot Bakery in Regina, host of Rise Up! the Baker Podcast and founder of Bakers4Bakers.org.