Chefs add culinary skills to corporations for food with flair 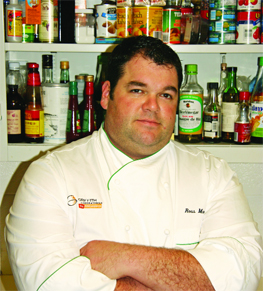 Chefs have been involved with corporations for centuries — if you want to stretch the definition of “corporation” to include monarchies — providing feasts and developing new recipes for jaded palates.  While a small percentage of chefs have garnered fame, fortune and Michelin stars at restaurants around the world since, others have apprenticed at their side, learned the trade, leaving to work at restaurants, foodservice, pastry and bakery shops, schools and hospitals.

They’ve taken up the culinary arts, and with food and cooking as their passion, sought a career.  Thirty years ago, before food permeated our culture, the idea of working as a chef was “suspect,” according to Barbara Fairchild, editor-in-chief of Bon Appetit magazine.  “Becoming a chef (today), is a perfectly ‘legitimate career,’” she told a group of students at the California Culinary Institute of America recently.

Not only is a career as a chef legitimate, it has expanded far beyond the original choices that kept one slaving in a hot kitchen.  Because food has become so important to us, we demand convenience foods tasting as much like the restaurant-quality dishes we eat when we dine out, so savvy corporations have begun hiring chefs to research new products and develop them in conjunction with their food scientists.  The lab is now where culinary art meets food science in the delivery of premium new products.

David Smith, vice-president of research and development for Griffith Laboratories, discovered his passion for food while working there.  A global company, Smith says Griffiths has always had research chefs since he joined in 1989, starting in Europe, then the U.S., and finally, Canada four years ago.

“Our business is processor-based,” Smith said.  “Foodservice represents the opportunity for growth, and it’s already a strength in the U.S. for Griffiths.  Once identified, a research chef became a need and a natural extension of our business growth.”
At Griffiths, Smith set a number of objectives for the role of research chef, including acting as mentor for the scientists in the company.  “I need our chef to introduce them to the creative side of food, through culinary ideation sessions and teaching them culinary skills,” said Smith.  When Griffiths’ chef, Ross Munro, works with the scientists in these sessions, he gains an understanding of why scientists do what they do, which helps all of them marry the art of food creation with the science of commercial production.

Smith offers the example of a chef’s natural use of saffron — both for taste and colour.  “At $180/kg,” he said, “our scientists know they need to find a cheaper duplicate — which isn’t always easy.”

Munro spends time working with George Brown College and other training facilities, so students understand there is a career waiting for them as a research chef.  Until September 2006, when the Culinary Institute of Canada (CIC) began offering a two-year applied degree in culinary operations, there really was no formal route or training to become a research chef.  In early 2007, George Brown is partnering with Guelph Food Technology Centre to provide a program similar to that of the Research Chefs of America, which develops both Certified Research Chefs™ and Certified Culinary Scientists™ through its Culinology® programs.  Through this program, chefs can take a series of food science courses at GFTC, while food scientists can attend culinary arts seminars at George Brown. The first of four three-day courses at GFTC begins in April 2007.

Ross Munro started out as a self-described “kitchen rat,” working in his parents’ restaurant, cooking his first prime rib dinner solo at age nine.  He attended George Brown College in Toronto, taking culinary management and hotel management, having worked in restaurants since the age of six.  His career as a restaurant chef even included a stint at CSIS in Ottawa before following his military wife to Alberta, where eventually he was Executive Chef at the Westin in Edmonton.  There, he was introduced to Six Sigma, leading projects in procurement, menu simplification and beginning work in research processes.

“When I started here, I was lucky,” said Munro.  “Jamie Matheson established a solid foundation as the first research chef, and I took over from him last year.  I have a solid background in the production of small and large quantity food, high-end products and love to push the envelope in flavor and presentation.”

Munro is confident that given the appropriate budget from a client, he can create anything at a banquet level equal to a fine restaurant meal.  This attitude carries over into his product development and research at Griffiths, where their baking market allows him to focus on a variety of products. “We have savory and sweet,” he said.  “And every day, a client will challenge us for something new — such as a crunchy topping that is peanut-free, but with the same texture as our peanutty one, with a caramel flavor.”

Foodservice spots the trends first, since their customers begin asking for changes in the menu or product offerings.  Munro said, “We have clients asking for products with no trans fats, cleaner formulations (less processing), no autolyzed yeast extracts or hydrolyzed vegetable proteins, no MSG, more wholegrain (not whole wheat), and the opportunity to make health claims on these products.”  For instance, if Munro and his scientific colleagues added flax powder or Omega-3 to a whole grain product, then Griffiths’ clients could work through Health Canada on the wording for their claim.

“I love being a research chef,” Munro said.  “It’s harder to know if your client — or your client’s customers — are happy immediately.  As a chef, I could toss a pasta dish in two and a half minutes, serve it and know at first bite whether my customer liked it or not.  As a research chef, it takes much longer to know if what you’ve developed has succeeded — primarily in bringing customers back to your client’s tables, again and again.”

Chef Allan Williams, with the CIC in Charlottetown, P.E.I., is a member of the U.S.-based Research Chefs of America (RCA) and a main proponent of the new applied degree program in culinary operations.  “We saw that the traditional role of the chef was changing,” Williams said.  “They’re not just working in hotel kitchens, but they’re consulting with industry and need more credentials, different training.  Corporations are looking for more than culinary arts from their chefs.”

CIC maintains an excellent network of food and consumer packaged goods companies across North America, ensuring not only summer internships for their students, but an almost 100 per cent placement upon graduation.  While the new program is teaching a minimum of food science, it does include product development and nutrition, along with foodservice economics, technology, marketing, project management and a host of other valuable skills within industry.

“We are a small school, so some students choose to take our two year Culinary Arts program, following with operations,” said Williams.  “Others, who have worked in the culinary industry, select the applied degree program, since they have the required chef skills.”

CIC is contacted by corporations seeking research chefs — more companies than the school has graduates, says Williams.  He first became involved in product development several years ago, when the regional food technology centre requested chefs to assist them in developing products from local commodities.  Williams talked with the scientists, as well as other chefs involved in product development, joining the RCA in the process and taking food science courses.  It was through his experience and networking, that he identified the industry opportunity for “a new breed of chef.”

“I can make a perfect chowder,” Williams said, “but if I freeze it, it would separate and be horrible.  A food scientist will know how to substitute ingredients so it works.  It is the marriage of the technical abilities of the scientist and the chef’s artistic abilities, and the combined expertise of both that equals success in the food industry.”

For Christine Cushing, much like Ross Munro, after growing up in her family’s kitchen and cooking even during university, she turned to George Brown, working part-time at Inn on the Park, which she felt was like “starting at the top in hospitality management.”  From there, she headed to Paris, to learn to be a “proper chef” at La Varenne.

“My passion kept me going,” said Cushing, “doing all the stages at different restaurants in a male dominant environment that was overwhelming.  After a year, immersed in food, I knew I wasn’t going to some restaurant and clean hoods the whole time.”
Upon returning to Canada, Cushing worked under Joanne Yolles, then pastry chef at Scaramouche, eventually replacing Yolles when she left.  Cushing, always seeking a challenge, eventually left the restaurant to explore her creative skills — trying food styling, cooking classes and catering, learning to work for herself.  Her catering got her an audition for a cooking show, and of course, Cushing is well known for her live FoodTV series, which involved different themes and foods daily and enormous amounts of research and pre-production.

“Food is spontaneous — you can never learn everything about it,” she said.

Cushing has drawn on all her chef experiences and passion for food, working with a distributor to develop her own “Pure” brand of food products.  “I believe in starting with great raw material,” said Cushing.  “I’ve developed a homestyle tomato sauce that can be recreated in a commercial product.  That’s where I, as a research chef, came into it — cooking, writing, tasting, culminating in a recipe that could be duplicated in large batches and still retain the homemade, artisanal taste of the original sauce I created.
Cushing is happy to be back in the kitchen, new possibilities simmering as she researches more “Pure” food, on a “bigger journey than she ever imagined.”

Being a corporate research chef is, currently, the road less travelled — and according to David Smith, “brings a life back into sanity — unlike working in a restaurant.”  For research chefs fortunate enough, like Munro, to work for multi-nationals, they don’t work in a vacuum, but instead draw upon the expertise of international colleagues, even meeting annually for a “food passion week.”

When art meets science these days — lab rats teaming up with kitchen rats —product showcases and capabilities presentations to clients achieve an entirely new level of excitement, delivering “Wows!” of discovery.  And it’s not just at pretty plates, but at what a whole new standard of teamwork can accomplish for an industry that survives on its innovation, growth and sales.