Endless varieties and combinations of oil 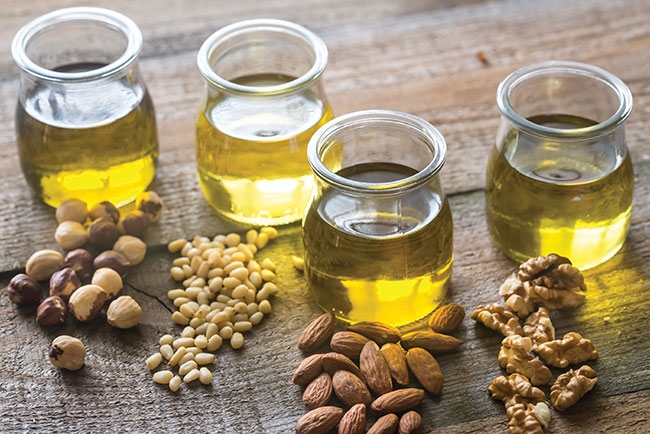 Oils have long been a part of baking. Consider the lightweight chiffon cake invented in Los Angeles, California, in 1927, by Henry Baker.

By replacing traditional lard or butter in his cake recipe, with vegetable oil, Baker — a former insurance broker —  relaunched his career by baking chiffon cakes for Hollywood stars. In 1947, he sold the recipe to General Mills and Betty Crocker introduced it to the home baker.

In Nellie Lyle Patterson’s Canadian Cookbook, first published in 1923, by Ryerson Press in Toronto (revised in 1961) fats had become interchangeable. It states, “Vegetable fats are available as oils, which may be used when melted fats are required.” Recipes such as Basic Muffins include the words “½ cup melted fat” letting the baker decide which to use.

Vegetable oils are also used in many different types of breads. It helps to lubricate the gluten, so dough can expand, with little effort.

It is not surprising that olive oils have always been prevalent in Mediterranean baking and desserts. Spain, Italy and Greece are the three top producers of olive oil. Think the ever-popular pita bread or focaccia or even pizza.

Countries within the region all have their own variations of olive oil cakes. It blends well into recipes that contain fruit, nuts, spice or chocolate.

Olive oil has a stronger flavour than other vegetable oils. A good rule of thumb is to sample a taste on a slice of bread, before baking with it.

Historical and classical baking aside, today customer demands for healthier foods or foods to match preferences or dietary restrictions have changed the marketplace. Plant-based diets are becoming more prevalent. While many are looking to eliminate solid fats, such as butter, shortening, lard and hard-stick margarine.

At Edible Flours, a vegan bakery in Vancouver, British Columbia, they have of course eliminated all animal products.   “And customers that visit us who are not vegan are here for other things, such as allergies or other health reasons,” says Amanda Huhn, owner and baker.

All cakes and cupcake batters at Edible Flours are made with 100 per cent canola oil.  The one exception is the lemon blueberry cake which uses coconut oil. “It really imparts a nice flavour,” says Huhn, who swears by this oil made from the meat of the coconut.

To give the flavour of butter without the use of animal fat, Huhn uses a product called Earth Balance which comes in stick form like butter.  “It is a natural blend of palm oil, soy, canola oil, flax oil and olive oil.”

Edible Flours uses this as a shortening in gluten-free lemon blueberry scones and gluten- free cinnamon rolls. They also use it in the filling of Nanaimo bars and s’more bars.

“We use it to spread on our cinnamon rolls and in our frostings for cakes and cupcakes,” says Huhn. “Honestly, our customers can’t even tell there is a difference. Our product tastes like any product you would get at a bakery using butter.”

Food grade essential oils such as lemon, lavender and peppermint are popular flavours at Edible Flours and Huhn uses them to flavour cakes and icings. “The flavours are extremely concentrated and just a drop is needed,” she cautions.

These essential oils are concentrated through steam distillation of raw plant parts such as flowers, leaves, bark, root, seeds or peel. The method produces a liquid mix of water and oil.  The oil is removed. Citrus essential oils are made differently, from cold pressing the rind of the fruit.

In general, essential oils are up to four times stronger than alcohol-based flavouring and they can save bakers and pastry chefs time in the kitchen. For example, using lemon essential oil eliminates the need to grate citrus zest to add as flavouring and because it is in oil form the flavour mixes easily throughout batters, doughs and icings.

At Candi’s Cakes, in Charlottetown, Prince Edward Island, owner and head baker Candi Clements uses 100 per cent vegetable oil in all her white, chocolate and red velvet cakes. “It makes the crumb lighter and very moist. I don’t think my cakes would turn out as well using anything else,” says Clements who has baked professionally for 25 years, opening her own bakery five years ago.

Candi’s Cakes, is the type of bakery where families and summering tourists may just drop by and select two dozen cupcakes from the showcase. Therefore, having a depth in selection is critical.  Essential oils are important to flavour both cake batters and icings.

“At my bakery, I find when customers order a white custom-made cake, such as a wedding cake, they ask for lemon or something citrus flavoured,” says Clements. “When they order chocolate, they ask for peppermint flavour.”

Cupcakes change with the season.  In the fall, the smell of freshly baked apple cupcakes fills the shop.  The taste is deepened with cinnamon essential oil added to the batter.

Peppermint is also a hit over Christmas season and flavours many of the loaf cakes decorated with holly, berries, Christmas trees and snowmen.

When it comes to nut oils, Clements has a go-to one and it is almond oil. She uses it in her almond shortbread cookies.

Almonds are naturally full of oil making up almost one half of its composition. Today, California is the biggest producer of almonds in the world.  Almonds are pressed when ripe to extract their oils.

Almonds and their oils pair well with fall fruits such as apples and cranberries, both fresh and dried, as well as dark chocolate, milk chocolate and even the new and much awaited ruby couverture, from Barry Callebaut.

Nut oils can intensify the flavours of nuts added to any baked good. Popular nut oils beyond almond in baking include hazelnut and walnut oils.

The best of these nut oils is made from nuts harvested in France, in small batches and thus can be expensive. It is worth the purchase however and a little can go a long way.

Pasticceria Gelateria Italiana has been part of the Little Italy neighbourhood, in Ottawa, Ontario since 1979. In fact, May marked the company’s 40th anniversary.

Calabro imports all his essential oils from Italy.  “I have one that smells just like Christmas,” says Calabro pointing to a bottle label panettone. It is made from Italian fruits that make up the traditional Italian Christmas cake.

“It is highly concentrated. I only use 2 small cap fulls for a batch of panettone, that makes about 32 loaves at 900 grams per loaf,” he says,

Calabro uses essential oils such as lemon, orange, anise and  bitter almond in his sweet paste crusts and shortbread cookies as well.

Oils in baking helps to improve the texture of a product and help it to maintain moisture. This ultimately extends its shelf life. It helps to lubricate bread doughs and soften the gluten. It also aids in carrying flavours through a product. Most importantly, it meets the needs of what many of today’s customers are looking for in their diets.