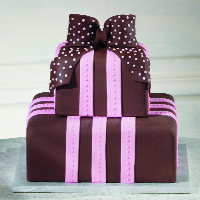 While today’s format of wedding cakes originated only 150 years ago, the traditions date back over 2,000 years to the Roman Empire.

Despite many historical challenges, the traditions have evolved, and some have even survived.  The first instance of a baked product showing up in the wedding ceremony is with the Romans.

While historically everyone seems to agree it was a bread-like round loaf, there are differing views as to whether this loaf was made of wheat or barley.  The loaf would be especially baked for the nuptials ceremony, and the groom would consume a portion, and then break the remainder over the head of his bride. Most historians agree this symbolized the breaking of the bride’s virginity, and the groom’s dominance over her.  Others record that it symbolized a plentiful life and years of happiness, or long life and many children.  The guests would scramble for crumbs as tokens of good luck.  Later, it became tradition for single women to sleep with a piece of “cake” under their pillow, in hopes this would soon bring them the man of their dreams.

The title, or description as “cake,” is from medieval England, where sweet breads or flour-based foods were sweetened, and were referred to as “cakes”. From approximately the 17th century through to the early 19th century, it was actually pie, filled with sweetbreads, mincemeat or mutton, that would appear at most wedding ceremonies of common folk.  It is told that a glass ring would often be hidden in one of the pies, and the lady to find it would be the next to wed.

There is a crossover period during the same time, during which the guests would bring small “cakes,” or sweet buns. These buns would be stacked up high, and the bride and groom would attempt to kiss over the pile, with success meaning that they would have many children.  This seems to have been more common in wealthy circles in earlier days.  Some believe the connection to the white frosted cakes came when a French baker piled up the cakes and poured a white icing over them, but I could not find any conclusive verification.

Historically, the first appearance of what was coined the “bride’s cake,” was in 1859.  It was to commemorate the wedding of one of Queen Victoria’s daughters.  Only the bottom tier was actually cake, and the layers stacked on top, like cake boxes, were pure sugar.  It wasn’t until 1882, and the wedding of Prince Leopold, when a tiered wedding cake was all cake.  And then, it wasn’t for another 20 years that pillars began to appear.  The first pillars were quite crude, made from broom handles, covered with icing to decorate and hide them.  At this point, as mentioned, the wedding cake was known as the bride’s cake.  The tiered design is said to have been modeled after the famous church spire of St. Bride’s in London (pictured above).

Bride’s cakes were to be white cake inside and white icing on the outside.  Later, King Henry VIII of England enacted a law specifying the quantity of sugar a cake may have, possibly to control or tax this prevailing convention.

During the Second World War, sugar was rationed in Great Britain, so icing could not be readily made, and cakes were reduced in size. To overcome this, cakes were often served inside a box, which had been decorated with plaster of Paris, to resemble a larger, traditional cake.

Most of us can recall the days when all wedding cakes were “supposed to be” white. The symbolism attached to the colour white is rather simple. Traditionally, white has always represented purity, a notion as it relates to white wedding cake icing. As mentioned earlier, a white wedding cake also relates to the symbol of purity, by the fact that the wedding cake was originally the bride’s cake. This not only highlighted the bride as the central figure of the wedding, but also created a visual link between the bride and the cake. Today, that link is being further strengthened as more contemporary brides have their wedding cakes co-ordinated with their wedding gown colour, even if it’s not white!  I have also seen wedding cakes that have been designed to closely resemble the design of the bride’s actual gown.

Most early wedding cakes of the Victorian era were also white, but not because of the symbolism. Using the colour white for icing had a more pragmatic basis. Ingredients were very difficult to come by, especially those required for icing. White icing required the use of only the finest refined sugar, so the whiter the cake, the more affluent the families appeared. It was due to this fact that a white wedding cake became an outward symbol of affluence.

The tradition of guests scrambling for crumbs during the Roman Empire has survived in the tradition in which guests are often gifted a small piece of cake, or more commonly today, to a small gift of chocolates, candies or even cookies, to take home with them for good luck.

The bride and groom cut the first piece of cake together, generally with the groom “helping” the bride.  This is viewed as the first joint task the couple perform as husband and wife.

The first groom’s cakes were reserved for guests to take home as a memento of the wedding. This is believed to have been the reason they were usually made of dark, heavy fruitcake, since it is durable and keeps for a long period of time; and possibly to contrast with the white bride’s cake. Some believe it was to be served by the groom, with a glass of wine, to the bridesmaids. Others believe it was to be saved, and subsequently shared with friends after the honeymoon.  Contemporary groom’s cakes, however, are not bound by old traditions. In fact, the groom’s cake is a perfect opportunity to express creativity. Many grooms like to have the cake decorated or shaped into something that reflects one of their hobbies, or something the couple enjoys doing together.

Today, the modern wedding cake takes on all sorts of shapes, sizes, configurations, and flavours.  It has become the focal point of celebrating the union of two people committed to each other, in the presence and witness of their friends, family, loved ones and peers.  And as such, respecting the traditions, caring, love and commitment in marriage, weddings cakes are crafted with great care, passion, creativity and love.  It is a wonder their creators are able to let them out of their sight when the time comes for the cake to be delivered or picked up – ready for the final performance.  And it is no surprise that these sugar-artists frequently receive cards of thanks from the happy couple, for their contribution to the special day and fond memories.
Wedding cakes – they’re not just another bakery item.

Mark Floerke is a historical food enthusiast, as well as product development and market manager for ADM Milling Co., Canadian Pastry Chefs Guild executive board member, Baking Association of Canada education committee member, and freelance baking and pastry instructor.  If you have history to share with him, you can contact him at:  misterpastry@cogeco.ca.