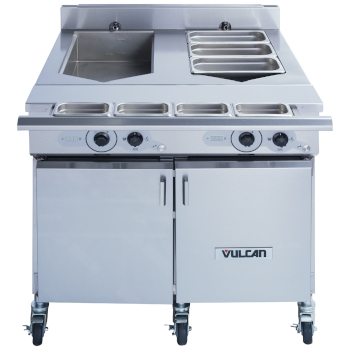 “Small kitchen” and “precision cooking” are no longer mutually exclusive with Vulcan’s introduction of a new kind of multi-functional cooking platform.

Known for its quality, energy efficient commercial cooking equipment, Vulcan is introducing the Versatile Chef Station, a compact, cooking station that is already winning awards thanks to features that allow chefs to maximize every inch of space while streamlining their workflow.

“In every kitchen, regardless of size, space is always at a premium,” said Chris Stern, Business Unit Manager in a press release. “Knowing this, we designed the award-winning Versatile Chef Station to provide every last inch of functionality and efficiency in a compact footprint. With multi-function cooking capabilities, the VCS makes the whole kitchen more efficient by freeing up other cooking platforms, saving on costly hood space and reducing clean-up time.”

Unlike anything else available in the U.S., the Versatile Chef Station’s unique design and multifunction capabilities are winning industry accolades. The National Restaurant Association® named Vulcan’s VCS as a recipient of the Kitchen Innovations® 2019 Award, presented by the National Restaurant Association Restaurant, Hotel-Motel Show. The VCS also received the 2018 StarChefs International Chefs Congress Innovator Award for Heavy Equipment, and the Editor’s Choice Award in New Equipment from the Hotel Experience Show. The Vulcan VCS acts as a griddle, fry pan, stock pot, saucepan and rondeau pan all in one.

The cooking surface of the VCS is a shallow well that can be used for searing, braising, simmering, steaming, boiling, shallow frying, sautéing and retherming. A double well setup measures just 36 inches wide, while a single well setup measures 18 inches wide. To change between cooking methods, chefs need to only turn a knob to their desired cooking mode (griddle, boil, or fry) and the VCS automatically sets the temperature to the typical pre-calibrated temperature for griddle cooking (450°F), boiling (212°F), or frying (360°F). Temperature adjustments can then be fine-tuned with a manual temperature dial.

To provide additional functionality, Vulcan designers incorporated cold water line connections into the VCS. With the push of a button cooks can add water to a cooking well to boil pasta or move from braising to simmering. An integrated probe in the cooking well directly senses cooking liquid temperature in Boil and Fry modes, providing additional accuracy assurance.

For additional safety, the water control is locked out while the VCS is in fry mode. During cleanup, waste liquids can be drained into a pan, six-gallon shuttle or directly into the floor drain.