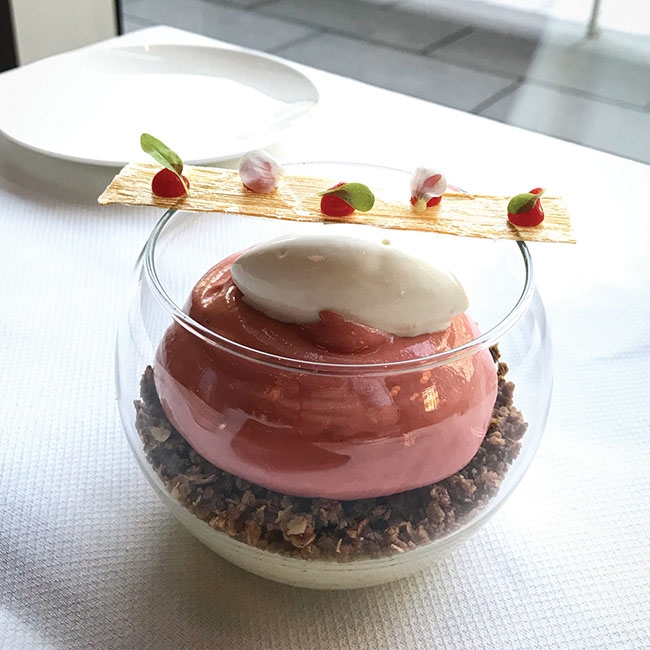 Daniel Mongraw, pastry chef and winner of Canada’s Best Pastry Chef Award in 2018, presented by Canada’s 100 Best Restaurants, has built a reputation for being fearless in his plated dessert creations. The same could be said for his unconventional career path.

Mongraw was three-quarters through a degree in Economics and International Development at McGill University, in Montreal, when he decided he just wouldn’t and couldn’t go on. “To this day, that degree still remains unfinished,” says Mongraw. But changing his course of action set forth a whole new career path. He left university and with work visa in hand, headed to Scotland.

“Then, I needed a job. Any job,” admits Mongraw. That came in the gruelling form of a dishwasher at a vegetarian café. Yet, already a vegan, Mongraw found himself curious to learn more about cooking and joined the line.

The next vegetarian restaurant he worked at was the much- lauded Vanilla Black, in London. There, without a pastry chef to make desserts, Mongraw would often step in. He enjoyed the challenge and learned how to adapt vegetables into desserts. “I was always happiest when it was time to change the pastry menu,” he remembers. Realizing this, he left the savoury side of the kitchen and went on a quest to find a job as a pastry cook. And Mongraw would get more than he bargained for.

After a stage in Stockholm for a month and a couple more months in a pastry kitchen in Montreal, Mongraw applied to Toqué! a Montreal restaurant known for its innovative local haute cuisine, as part of the pastry team. “But after three months there was a moment of crisis. “The pastry chef quit. Then others quit. I was left alone,” And what happened next? He stepped up.

So how did a pastry cook, with limited experience and no pastry chef to guide him manage to keep it all together? “In the absence of any structure, you have to stay self-motivated,” Mongraw says philosophically.

He describes the next year at Toqué! as a slow process that required maintaining what was already on the dessert menu, while rebuilding a pastry team.  “Then, I began to refine techniques and experiment. They let me do whatever I wanted to do creatively, without having to justify it.”

The passion this freedom inspired led to five and a half years as pastry chef for the restaurant. Making everything from scratch and learning to incorporate fresh fruit and vegetables of the season into all he made also meant that preserving, canning and pureeing was part of the process. “When it is in season it costs less and tastes best, Following the seasons, kitchens are able to win on both accounts.”

But it was time to move on when a group of Montreal restaurant and bar owners approached him about a new business opportunity. Mongraw was intrigued by the prospect and bought in as a partner, opening Confetti Café & Glaces, in January.

“At it’s core it is an ice-cream shop with a café built around it,” says Mongraw. The 30- seat restaurant looks like something straight out of Paris. And while patrons buy sandwiches and soups the draw is really the ice cream — Mongraw-style.

“The market is incredibly saturated. I couldn’t just keep repeating classic flavours. I want to be interested in what I am making so others can enjoy it too.” He admits to sometime getting caught up in the science of it. “I have to keep asking myself,’ Does this taste good?’”

Some of the experiments have gone awry, like the roasted eggplant with white chocolate that he named Baba Ganache. “It was awful!” he exclaims, while laughing. “I didn’t even let anyone try it.”

On his menu there are currently four classic crème anglaise based ice creams to choose from, as well as two frozen yogurts and three sorbets. And in the take-out freezer there are always at least five different varieties to take home.

Crème fraîche, requiring 36 hours to develop, is the featured ingredient in the ice cream of the same name. There is also a sesame praline paste ice cream and a salted caramel, with black garlic ice cream.  The beeswax ice cream starts by first infusing beeswax in hot milk, cooling and refrigerating over night. The wax floats to the top, is removed and strained. Honey is used in this case for extra sweetness, instead of sugar.

One frozen yogurt contains a nod to the African bush tea Rooibus and the other is sea buckthorn, which customers find both tart and refreshing.

Coconut milk and orange blossom sorbet is made with coconut milk that has been infused with dry, unsweetened toasted coconut and strained before starting to make the sorbet.  Apple Chinese lapsang souchong has a blend of this smoked tea, regular black tea and apple juice.

The citrus sorbet is made with grapefruit, oranges, lemon and lime. Mongraw notes, “When you are dealing with citrus the sugar content constantly changes so I use a refractometer.” For the texture he wants the desired sugar ratio is 30 percent.

But as the spring begins and summer draws near Mongraw is already thinking up new flavours. “First their will be rhubarb sorbet with lavender. I like vinegar with red fruit. And strawberries with ice wine vinegar. Raspberries always find their way through flavour and I like to pair them with sour cream. I like blueberry sorbet.”

August bring Mongraw’s favourite harvests of the season including orchard fruits that he like to roast in the oven with butter, sugar and vanilla. And he loves corn and squash in desserts as well.

It’s hard to imagine Mongraw not making up plated desserts– so there are three at all time on the menu.  The ice cream sandwich uses a homemade molasses cookie with a frozen Bavarian, spiced with nutmeg, clove, ginger, cinnamon and star anise and the centre is filled with an oozing butterscotch. “It’s assembled when you order it, so every element is at the right temperature when you eat it,” say Mongraw