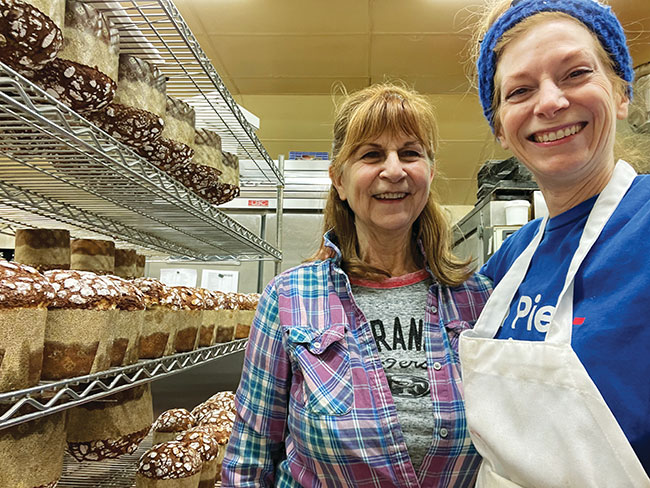 Tracey Muzzolini will be a familiar name to many in the industry who have followed competitive baking. Her achievements as part of Team Canada are second to none.

As co-owner of the venerable and well-loved Christies Mayfair Bakery in Saskatoon with her brother Blair, Muzzolini is clearly a woman who leads.

There is another pioneering woman behind Christies you may know less about: Janet Muzzolini, the visionary and financially shrewd partner with baker and husband Ennio who revived Christies as a Saskatoon touchstone.

These two strong, pioneering women have had different focuses within the bakery over the years – Janet’s on business operations and Tracey’s on artisanal bread making, and different experiences when it comes to the gender divide. But it’s clear they share values, work ethic and attitude of gratitude toward their community that have made it a much-loved part of Saskatoon.

The original location on Mayfair is about 3,600 square feet, mostly production, with a small retail section. In 2012, they opened a second location 10 minutes away – Il Secondo – a highly successful bakery-bistro with a seating area for 40 to 50 people featuring a wood-fired pizza oven.

But let’s go back to the beginning. Picture this: Saskatoon, 1966. Janet and Ennio Muzzolini decide to open a bakery in Saskatoon.

“My husband Ennio was the baker,” Janet says during a lively mother-daughter Zoom chat with Bakers Journal. They made the perfect team – expert baker and go-getter businesswoman with a head for numbers – working at different times of day.

“That split shift was probably better for a marriage than not,” Janet says with a laugh. Tracey takes up the story: “Janet was the business side of the bakery. She also started the birthday and wedding cakes side of the business back in the ’80s.”

“I also raised three kids,” Janet says with a smile. “I worked to 2 a.m. after the kids were in bed at that time. That part fit for me because I could choose my own time, pretty much. I had to have the wedding cakes done for pickup.”

Janet and Ennio saw opening their own bakery as an opportunity to prosper and raise a family. “When I started I was secretary at CNR and I married this Italian baker. He was working something like 12 hours a day, six days a week. The pay was very poor. Ennio was very well known in the city by other bakers.”

The prospect of raising a family on a baker’s salary prompted the couple to buy the bakery that was opened by the Christie brothers since 1932 but not prosperous in later years under other ownership. “The opportunity fell in our lap – there was a possibility we could make a decent living for our family. I said, let’s go for it.”

Needed husband’s signature
Seeking financing is where Janet ran up against a sexist attitude that still grates on her all these years later. “We had some money saved. The Business Development Bank wouldn’t offer a capital loan without a down payment so we could buy it from the seller.”

“We got my brother-in-law to sign for the loan – I used his collateral – and they were tough years. My goal was to pay it off in within six years. We wanted to own the land and the building outright. We did it!”

“I took care of sales – everything. In the early days [suppliers] would not deal with me. They said, ‘I want to speak to your husband.’ Ennio would come out and he would say, ‘Ask her. She’s the one that does it.’

Even when the business was prospering, sexist attitudes persisted at the bank. It bothered Janet so much, she carried out a little test. “I said I’m going to go the bank and say I need this loan and I don’t want my husband to know about it. I wanted $5,000 and they said, ‘We’ll give it to you, we just have to get your husband’s signature.’ We were 50/50 partners. It didn’t make any sense. I had to kind of threaten them because they valued us as a customer. Actually, it was a credit union and they were really good to us through the years. Finally, they gave in to me, they let me sign off on the loan. Then I gave it right back to them,” she says with a mischievous smile.

She helped start a women’s entrepreneur group in Saskatoon to network and support each other. They started with small gatherings, grew to regular dinners later on and now there is a group for the whole province.

But Janet’s and the family’s greatest strength may be integrity. “We always were honest, I kept my morality,” Janet says. “I guess you’d say, always trusting, not cheating customers. Always being honest: I think that goes a long way with suppliers and customers.”

Tracey’s baking rebirth
Tracey came into baking via a different route. She has fond memories of childhood in the bakery: “There are times when I was a kid when my mum had to help dad in the middle of night, so she had to grab us out of bed and take us to the bakery and we’d camp out in front of the bakery in our sleeping bags. That was my childhood.”

But she was curious about the wider world beyond Saskatoon and the bakery. After university she went to Australia for a holiday, then studied film and television for five years in Toronto.

While in Toronto she worked at one of for Susur Lee’s restaurants. “That changed my perception of food,” she says. “Sasktoon in the 1980s wasn’t too good for culinary experiences, you might say. Being part of the culinary scene in Toronto got me excited about making bread. I had history of it, and my parents had a bakery, so I thought, I might as well go back and see what I could do there.”

This was when artisan baking was having a rebirth in the 1990s. “I turned back to old-school bread and old-world techniques and sourdough – that kind of thing. That’s how I got into baking: I was born into it, and I had a rebirth.”

She also had a hunger to compete and excel. “I was searching for knowledge of artisan techniques. My dad is an excellent baker. He’s very fast, very intuitive. “I was looking to do more French and European baguettes, croissants and sourdough and things like that – stuff we weren’t doing at the bakery. I was looking for some technical knowledge including how to write formulas.”

Tracey spent her thirties devoted to bread including competing with Team Canada in the Louis Lesaffre Cup held in Mexico in 2007.

“It was super fun, super cool and good character building. If you’re interested in bread and pastry – I mean vienoisserie-style pastry, yeast in pastry – it’s so complex, there’s so much to continue to learn, and that’s why I’m still here doing it. 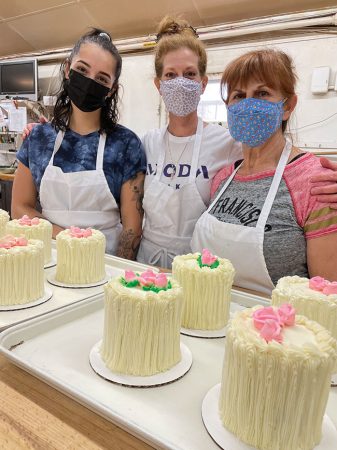 A new generation
Tracey describes a different experience of being in a minority when she was competing for Team Canada. “There were hardly any women at all in the entire competition. It was more like surprise than sexism. It was more about being pioneering, that’s the way I look at it. With the Bread Bakers Guild, all the men were supportive of the women. I think I was just beyond the turning point of when women started being more involved in baking. I got to miss out on some earlier sexism, I think.”

Working in the night bakery with male bakers was a challenge. “I had to prove myself – hard – in my dad’s kitchen,” she says. “It was challenging because it’s a woman, not a boy, following in his footsteps, with her own ideas. Maybe it would have been better if I had just said, ‘Teach me your way.’

“I was going into his place, changing things, getting in his way. That’s got to be tough for him. That’s got to be annoying for anyone. I was stubborn, I just pushed through. I was willing to overcome any obstacle there could possibly be to get this artisan bread thing going. And I did it.”

Tracey and brother Blair took over the bakery in 1999. She shares an example of how Blair has always had her back. “I said, ‘I can’t make baguettes in this rotating oven.’ He said, ‘let’s buy an oven.’ But I was worried we couldn’t afford it and he said, ‘Nope, we’re getting it.’ That changed everything, having a little deck oven that we put inside the front of the bakery where people could see what we were baking. Artisan baking was hardly ever heard of in Saskatoon. There I was with my little two-deck oven putting on a show. Blair has been behind me all the way.”

“We have a commitment to consistency,” Tracey says. “Doing artisan handcrafted baking is so challenging and so much could go wrong. It’s important to take the time to set up an excellent system with times and temperatures laid out so people can follow it and be successful. My brother Russ has a PhD in software development and works in San Francisco. He has taken first my paper system, then my brother Blair’s computer system, and now we have this amazing connected system with everything from ordering to changing formulas to an app for mixing.”

Janet, Tracey and Blair were always taking classes, going to showcases and bakers’ conventions. “I think it helped a lot to meet other people in the same business and see what’s new out there,” Janet says.

Tracey agrees: “It’s a rejuvenation too. It’s just so inspiring and you get to share your stories. It makes you feel like you’re not alone. You can always get an idea from somebody.”

A male-dominated industry
Bread making is more male-dominated, Tracey says. “Pastry may attract more women because it’s finer work. I’m seeing more women in bread making. It’s just going to take time. The hours for baking are tough – they’re not conducive to a family lifestyle. It’s extremely physical work and that might put people off. You have to have a certain toughness and a certain sensitivity because you’re dealing with something that’s alive. Maybe baking’s not attractive to everyone. It’s hard work, on your feet all day. You’ve got to be resilient, tough and strong. Women definitely can be that way.”

Tracey believes more good role models are needed at forefront of artisan baking. She points to Linda Haynes from ACE Bakery in Toronto and American chef, baker and author Nancy Silverton among her own role models.

Tracey wonders, only half-jokingly, if the bread baking profession should be promoted as a way to keep fit. “It’s a workout. You learn how to do things, you build strength, it keeps you strong, agile, flexible, and it keeps your problem-solving skills sharp. If you’re a person trying to find your way and you have a little obsessive-compulsive energy, you could really be fulfilled.”

What’s next
Janet’s long-term plan is to continue to mentor and help her kids make their own decisions, which will affect finances. “They’ve done a really great job in taking it over,” she says. When Tracey came in, she revived it and made it boom. Letting go of it completely is the hard part.”

The future looks bright for Christies, beginning with two bright spots in 2022. First, Tracey will appear as a judge on the new Wall of Bakers on Canada’s Food Network sharing her knowledge and skill with novice bakers. Second, this year marks Christies’ 90th anniversary. The team looks forward to taking their mobile wood-fired pizza oven – Il Bambino – out to street fairs and celebrating being back with people.

Says Tracey, “I think we’ll have euphoric recall. Businesses that toughed it out I think will be rewarded.”