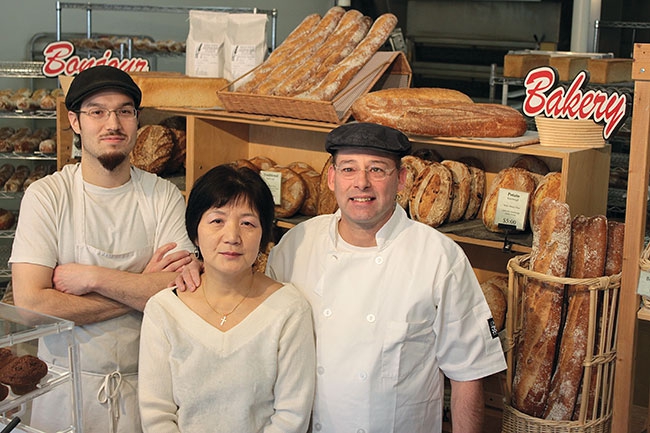 Bonjour Bakery in Edmonton is the winner of Bakers Journal’s 2014 Business Innovation Award. The bakery is owned and operated by Yvan Chartrand, 54, and as the winner, he receives a $500 prize and a plaque to hang in his bakery. Jelly Modern Doughnuts, with locations in Toronto and Calgary, is our runner-up. More on them below.

Chartrand runs Bonjour Bakery with help from his wife, Ritsuko; their 28-year-old son, Kenny; and two part-time employees. They purchased the business, then known as Tree Stone Bakery, in 2010 (although they have temporarily retained the Tree Stone name and brand while they give the building a makeover), taking over from longtime owner/operator Nancy Rubuliak, who ran the bakery for more than a decade.

Prior to establishing Bonjour Bakery, Chartrand owned and operated two bakeries in Sapporo, Japan, where he met his wife. “The Japanese make excellent bread,” he recalls. “They are so organized. They go and study the process in France and keep it exactly the same.

“We were one of the first bakeries to introduce bagels in Japan and customers there called them hard doughnuts. We had to teach them how to eat bagels,” he recalls with a laugh.

The Chartrand family produces a fairly traditional lineup of breads, bagels, baguettes, brioches and croissants, but their production and marketing are far from being stuck in the past. For example, thanks to the acquisition of some new Italian-made equipment, such as a hydraulic divider, Yvan, Ritsuko and Kenny are able to start later in the day while making the same quality of baked goods.

One of the biggest challenges of staffing a bakery, Chartrand says, “is finding someone who wants to work from 2 to 8 in the morning. By doing these changes in processes and technology, between the three of us we have doubled the level of production that was here before.”

Hiring help has also become difficult thanks to Alberta’s oil boom. Rubuliak struggled to find journeyman bakers and as a result had trouble meeting demand. But so far, the Chartrands have managed to keep up. They’ve even successfully moved into the wholesale market, supplying restaurants and cafes, while retaining the look, feel and yes, smell, of a small local bread shop.

“We are constantly introducing new products. We are traditional but we make all kinds of new doughs. We look at what customers are asking for and go from there.”

Some of Chartrand’s recent innovations include a traditional sourdough bread made with barley and brown rice, as well as purple wheat bread. “Here in Alberta we one of the only bakeries that make the purple wheat bread,” says Chartrand. “It’s mainly made in Saskatchewan but as far as artisan bakeries go, we are the only ones doing that.”

Upon purchasing the business, Chartrand made major upgrades to the bakery equipment and more than doubled product output and revenues—while staying true to his vision of making European-style bread.

“That’s one of the biggest problems for bakeries like us—trying to get bigger and more profitable,” he says. “We have done it by changing production techniques. Even though we are traditional, we are using the latest technology.”

That technology includes a hydraulic dough divider imported from Italy that has allowed Chartrand to drastically cut the amount of labour time needed to produce bread.

“It doesn’t change the quality but it changes your timing,” he says. “We still do some loaves by hand but many we’ve put in the new machines. Everything is in a controlled chamber, with a controlled temperature. So instead of starting at 2 in the morning we start at 5 or 6 so it’s a lot easier on staff.”

Some of Chartrand’s most innovative work, however, has been done not in the backroom but on the business plan. He came up with a strategy to find new sources of revenue and has executed it with great success, growing the bakery’s annual sales to restaurants from $10,000 to $100,000.

“We are more profitable wholesale than retail,” he says. “That’s where I think small bakeries are missing some opportunities. But we would not have been able to do that without upgrading our processes. That’s a trend small bakeries in North America can adopt. The big guys can’t produce the high-end bread that nice restaurants and cafes want. For us, that’s been really important. And financially it’s been a big help: I was able to pay off my loans a year and half early.”

From left: Kenny, Ritsuko and Yvan Chartrand, winners of Bakers Journal’s 2014 Business Innovation Award for their work with Bonjour Bakery in Edmonton

Another new avenue for growth at Bonjour Bakery has been the addition of gourmet meats and cheeses. Chartrand has devoted part of his counter space to fine cheeses and is in the process of installing a room for prepared and fermented meats, such as charcuterie. It’s a trend Chartrand has seen taking hold in Quebec and he intends to bring it to Edmonton. “So instead of going to a specialty meat or cheese shop, they can get it here” with their baguette, he says. “That way, I can raise the sale by $5-$6 per customer. That’s a huge difference—cheese and meat are very profitable, which really helps the bottom line. And there’s not much additional labour involved.”

What’s remarkable about Bonjour Bakery is how Chartrand has innovated so much without losing sight of his core mission, which is to serve the community as a small, neighbourhood bakery. Even more impressively, he also aspires to serve his fellow bakers. Of particular concern to him is the workload—and by extension, stress—bakers put upon themselves because they don’t stop to examine how they are running their bakeries.

“I want to help other bakers and other bakeries. I’ve been baking for 20-odd years; I’ve had businesses overseas, and so small bakeries here in Edmonton will come and see me to talk about processes. I want to see them succeed with a good quality of life. You have to be passionate, of course, but your passion can put you in the hospital. It makes no sense to get sick, get divorced, over a business. I would be happy to be recognized as someone who wants to help small bakeries see each other as partners instead of competitors. In business, whenever you become arrogant, that’s when it starts to go downhill. Why do you want to be in business to make enemies? Life is short, so you might as well be friendly with everybody.”

And although the business has grown quite a bit during the five years Chartrand and his family have owned and operated it, they’ve been careful to maintain ties to the customer base. “My wife just came back from three weeks in Japan and customers are hugging her and saying welcome back,” he says. “That personal touch is often missing here in North American bakeries.”