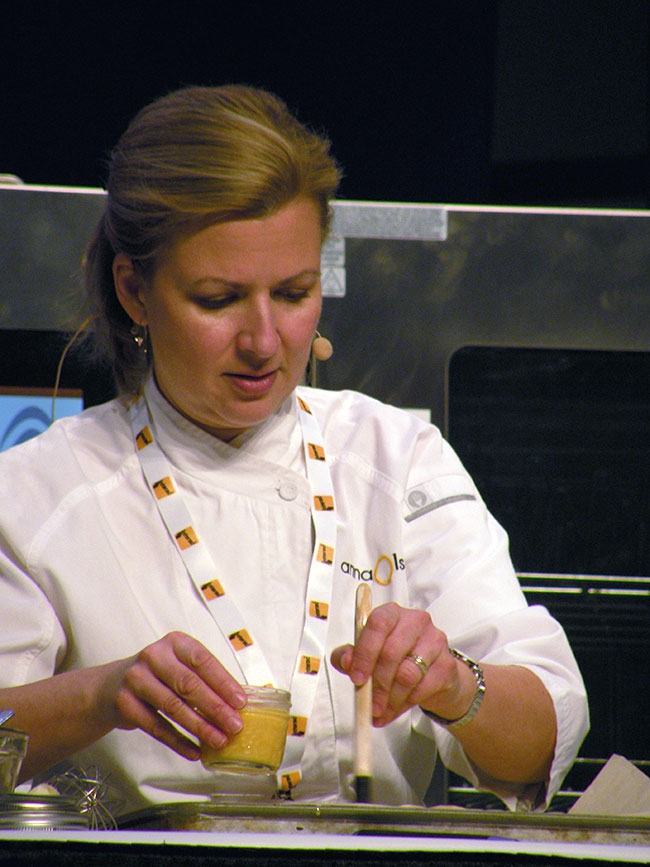 Canadian restaurateurs, caterers, bar owners, manufacturers, distributors and other foodservice providers congregated at the Direct Energy Centre in Toronto from March 1 to 3 to check out the latest products and hear from food industry experts on a variety of topics.

The Culinary Salon, sanctioned by the Canadian Culinary Federation (CCFCC) and endorsed by the World Association of Chefs Societies culinary committee, featured three days of individual and team competition in various categories as a stepping stone to competing on an international level at the 2016 World Culinary Olympics in Germany.

In the Pizza Pavilion, new this year, master chef Pasquale Ponticiello of the Associazone Veruce Pizza Napoletana demonstrated how to make Neapolitan pizza dough while the School of Italian Pizza’s Francesco Zulian translated and added commentary on the differences between Neapolitan and other pies.

Neapolitan pizzas generally contain less fat, Zulian said. The best time to judge a pizza’s quality is a day after eating it, when you can judge its lightness and digestibility, he added. Rising and maturation are important; a dough might rise but not necessarily mature.

Other tips: at 4 C, rising stops but not maturation; Canadian flour is high in protein, so it takes longer to mature; and, for best results, chefs should try to keep salt and yeast apart as long as possible.

NPD Group’s Mark Dempsey led a well-attended seminar called “The rise and fall of fast casual: flash in the pan or here for the long run?” Dempsey described the fast-casual restaurant concept in the following way: you order at the counter, spend $10 to $15 and wait for your food amid engaging décor.

Key characteristics include appealing to millennial customers by offering several better-for-you menu options, building loyalty among customers and covering as many day parts as possible. Williams Fresh Cafe is a perfect example of a restaurant that hits all the marks, he said.

Celebrity chef Anna Olson brushes egg on her Mushroom Wellington pastry as part of her tutorial on putting a local twist on traditional favourites.

At 15-plus per cent growth compared to flat or declining numbers in quick-service and full-service restaurants, the fast-casual concept is here to stay, Dempsey concluded.

“It’s a sustainable model that has stolen share from established restaurants,” he said.

Always try to use what’s in season, Olson said, pointing out that root vegetables have been in season for months; mushrooms are available year round, with all varieties being grown in the dark; and maple syrup season is just around the corner. The website OntarioFresh.ca, a sponsor of the demo, has a database that lets users look up ingredients to find out what is in season and where you can buy it, she said.

On the new product front, Hero told show-goers about its full-strength compounds, which are designed for use in pastries. The compounds, which feature such flavours as caramel and orange, have a 24-month shelf life. The company’s syrups, which are suitable for plating, toppings or as a swirl, were also on display.

At the Bunge booth, they ladled out delicious soups made with the company’s creamy dairy-, lactose- and gluten-free sauce base. The base, which has a fat content comparable to that of whipping cream, was developed for use in both savoury and sweet dishes. It has a 12-month refrigerated shelf life, representatives said.

The folks at Indulgables, a maker of gluten-free cookie cups – crispy rice bases filled with Belgian chocolate ganache and decorated with a marshmallow topping and embellishments – advised their new chocolate writer is coming soon.