News
Time Out Market is coming to Montréal 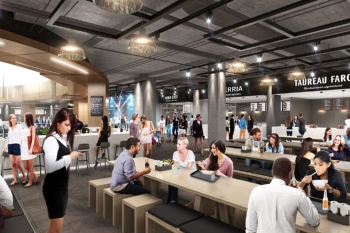 Artist mock-up of Time Out Montréal Time Out Market

A new hotspot for foodies and culture lovers is coming to Montréal: Time Out Market is set to open in late 2019 in the Centre Eaton de Montréal, on Sainte-Catherine Street in the heart of downtown Montréal.

Time Out Market Montréal will bring the best of the city together under one roof: its best restaurants, bars and cultural experiences, based on editorial curation. Visitors will get to taste food from the city’s top chefs and best restaurateurs, sip cocktails from leading mixologists, and experience culture with Montréal’s rising culinary talents.

Time Out Market is part of Time Out Group, the global media and entertainment business. The Group has signed its first management agreement with global real estate leader Ivanhoé Cambridge to open Time Out Market in Montréal, the first in Canada.

Occupying more than 3,300 m2, Time Out Market Montréal will include a curated mix of 16 food offerings, two bars, a demo kitchen, a cooking academy, a retail shop and a cultural stage, creating a high-end food court representing Montreal talent in baking, cooking and cuisine.

With its location at the heart of the city on Sainte-Catherine Street, Time Out Market will be the centrepiece of a C$200M redevelopment project at Centre Eaton de Montréal, a landmark downtown destination with an annual footfall in excess of 30 million visitors. Centre Eaton de Montréal is owned and managed by Ivanhoé Cambridge, which is currently investing more than C$1B in revitalizing this part of downtown.

Time Out Market Montréal is following the wildly successful culinary phenomenon Time Out Market Lisbon, which opened in 2014 to offer the very best of Lisbon with 26 restaurants, six kiosks, eight bars and cafés, five shops as well as a cooking academy. With 3.6 million visitors in 2017, Time Out Market Lisbon is the country’s most popular attraction thanks to the high-quality fine dining and cultural experiences it makes available and accessible to all.

In March 2018, it received an international award recognizing it as one of the most visionary concepts in the European food service sector.

Building on the success of the Company’s flagship market in Lisbon, Time Out Market is set to open in New York and Miami at the end of 2018, to be followed by Boston, Chicago and Montréal in 2019.

With a focus on supporting local businesses, a close connection with the city is at the heart of the Time Out Market philosophy. As with its existing location in Lisbon, it is expected that the Montréal site will bring significant employment and broader benefits to the area.

Didier Souillat, CEO of Time Out Market, commented, “Montréal has developed into a culinary hotspot and is now one of the world’s foodie capitals. This is a city with incredibly creative chefs and an audience with a love for great food. As if this wasn’t enough, Montréal also has a buzzing cultural scene with over 100 festivals each year. All of this makes this city a perfect spot for Time Out Market and we look forward to opening our first site in Canada.”