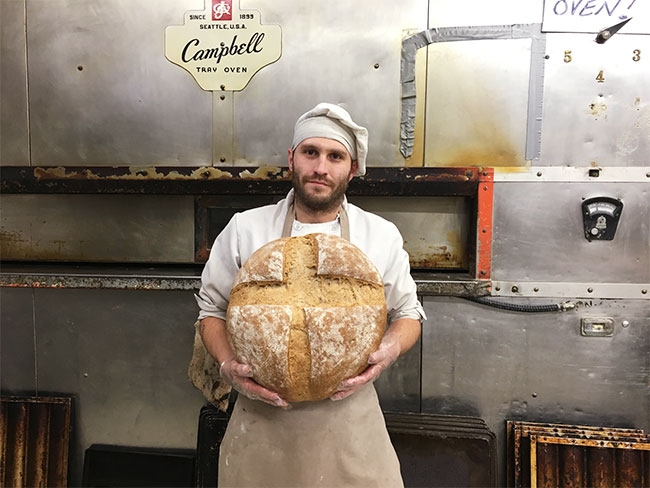 Kimberley City Bakery is the kind of business that could be excused for flying under the radar. Tucked away in the heart of the Canadian Rockies in Kimberley, B.C., it’s a 10-hour drive from Vancouver, a seven-hour drive from Edmonton, and a 4.5-hour drive from Calgary. Spokane, Wash., is a tad bit closer – a mere four-hour jaunt by car.

Basically, it’s a long way from everywhere. But now it’s on the map in a whole new way.

That’s because Kimberley City Bakery, owned and operated by the husband-and-wife team of Eric and Michelle Forbes, is this year’s winner of the Bakers Journal Jake the Baker Award sponsored by Ardent Mills and Reiser.

Bakers Journal launched the Jake the Baker Award in 2015 as a way to honour innovation, marketing mastery and community service in Canadian bakeries. There must be something in the water – and by extension, the bread – in British Columbia, because Canada’s Pacific-coast province has had a stranglehold on the award since its inception.

Patisserie Daniel in Victoria, B.C., won the inaugural Jake the Baker contest in 2015. Last year, it was Surrey, B.C.-based Pikanik taking home the trophy. This year, Ontario nearly broke the streak as Ottawa-based Bread By Us came an extremely close second.

But Kimberley City Bakery, the rustic, Bavarian-influenced shop in the scenic mountain town of some 7,000 residents came away with the win.

Eric Forbes says the award is a testament to the excellence of the team he and Michelle have put together in the four years since they acquired the bakery. “To put it in perspective, we’ve been working really, really hard at this,” he says. “My lead baker, Bud Lainey, he works so hard – his dedication is amazing – and this is a nice feather in his cap, as well as ours.”

Lainey, Eric adds, “came with the business. When we bought the bakery, he had the choice to stay or go, and he chose to stay, and I’m very glad he did. He’s been a critical part of the bakery’s success. We came together around a common belief in the importance of making everything fresh, from scratch.”

Michelle also gives credit to their front-of-house manager, Melanie Kostiuk, and “her ability to sell the product and knowledge that she’s gained since she’s started working with us … she knows everything that’s in every product and she’s able to describe things almost better than we can.”

The bakery’s European flair comes naturally, as Eric and Michelle spent a year living in Europe after getting married. “We wanted to recreate what we had experienced over there and bring a little piece of Europe to the middle of nowhere in the Canadian Rockies, so everyone in Kimberley could have the chance to see what it’s like,” Michelle says.

Also, adds Eric, “When we first bought the bakery, it had kind of a Mexican or Spanish theme and colours that just didn’t feel right. So we changed it so it’s more natural-looking with lots of stone and wood.”

They also went to great lengths to acquire an authentic European leavening machine from a company in Milan, Italy, the Automatic Fermenter by Agriflex. They say it’s the biggest innovation that sets them apart from their competition, as it allows them to make additive- and preservative-free breads while naturally prolonging shelf life.

“All-natural ingredients for all-natural bread,” Michelle wrote in their entry for the Jake the Baker Award. “And that is something that makes people healthier and happier.”

Eric told Bakers Journal about the process involved in acquiring the leavening machine, which he says is just one of three of its kind in use in North American bakeries. “The company rep said, ‘I don’t know how to get it to you.’ We said, ‘We’ll figure that out.’”

“Well, they sent it by boat to Montreal, and there it was put on a train to go across Canada, and then we found a freight company that would bring it [to Kimberley]. They brought it to us and said, ‘Well, here you go, best of luck.’ And then they drove away. And I’m standing there just staring at this gigantic wooden crate that looks like something you’d see the Tasmanian Devil come out of.”

In addition to having innovative products made by an innovative machine, Eric and Michelle pride themselves on thinking outside the box when it comes to hiring and marketing.

In regard to the former, they use an unorthodox, audition-style job interview process to find the best candidates for their bakery team.

“We have a very basic initial job interview for screening purposes,” Eric says. “But then we have an audition – you come in and show us what you can do. Regardless of what you know, show me something.”

Michelle says it’s a process that takes more time and effort to carry out, but is well worth it in the long run. She says they will even train people who might lack certain skills but demonstrate a willingness to learn and potential for success.

“We want to make sure it’s a good fit for us and a good fit for the person who’s coming to work with us,” she says. “Because if they come and start working with us, and they’re overwhelmed, then it’s not going to be good for them and it’s not going to be good for us. By giving them the chance to ‘try out’ the job, that gives them an idea of what it will like and give us an idea of how they will fit in with the rest of our baking team.”

Their approach to marketing is even more creative and, well, just plain fun: the annual Kimberley City Bakery Medieval Festival. Yes, you read that correctly: Eric and Michelle launched a festival that brings thousands of visitors and hundreds of historical re-enactors dressed up as Vikings, knights, lords, ladies, minstrels, and other assorted character archetypes from Medieval times.

The festival “has never failed to bring in 10,000 visitors to our town of about 7,000 people,” Michelle wrote in their contest entry. It’s the most successful marketing that we have done since taking over” (the bakery).

“The Medieval Festival brings so much fun to the community,” Michelle says, “with all the Vikings and the knights … it’s so much fun for the kids. A lot of them don’t really travel out of the Kootenays much so it’s not something they would have never experienced before.”

Eric adds, “It’s also fun for our staff because we get to change up the menu. They get to bake ‘period pieces’ that people would have eaten between 700 and 1200 A.D. What were the breads like back then? The cookies, the treats? We get to make all that, as close to authentic as we can. It’s fun for the staff. They can come up with their own recipes and we’ll make them.”

Michelle says the re-enactment groups that swarm the town bring lots of recipe ideas. “We supply all of their bread and buns for their meals. So you’ll see them feasting on their authentic, medieval-style bread that was baked by us.”

Some of the Medieval Festival breads have made it onto the bakery’s shelves as regular products.

“We’ve modernized some of the recipes so they result in a loaf of bread instead of a flat bread,” Eric says. “But otherwise, it’s the same idea. People don’t even realize they’re eating Viking bread!”

Kimberley City Bakery’s marketing mastery is also evident in the digital realm. Eric and Michelle livestreamed, via Facebook, their acceptance of the Jake the Baker Award, and they’ve invested heavily in online marketing strategies.

“We live in a town of 7,000 people,” Eric says. “We need to get our name out there somehow. What better way than social media? We have it set up now so that when people come into Kimberley, and they’re new or just visiting and their smartphone isn’t based in Kimberley, our Facebook ads go to their phones. They’ll get an ad that tells them, ‘Hey, you’re getting close to the Kimberley City Bakery …”

After winning the Jake the Baker Award, here’s hoping a lot more people will be seeing that message pop up on their phones.