Features Profiles
The sugar shack is back!

City slickers get a taste of the country 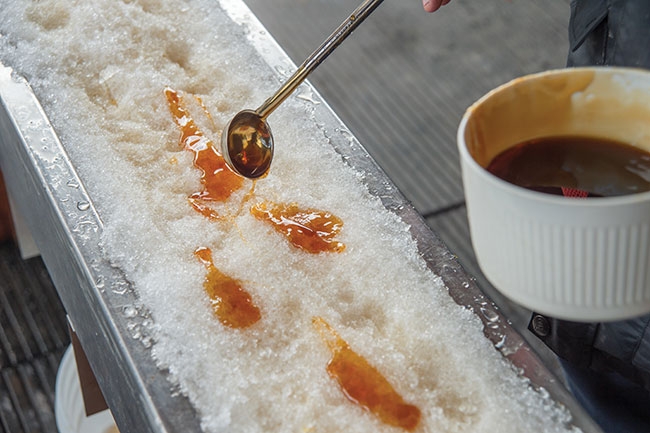 What sweetens up winter blues like a good old-fashioned sugaring-off? Redpath Sugar began its Sugar Shack festival five years ago to bring a taste of the country to the big city.

When Victoria Syme began working on Toronto’s annual event, she knew there would be challenges. Syme wants to bring Toronto’s Sugar Beach on an international scale, such as Chicago, New York and Montreal. Bringing Torontonians out from the warmth of their homes to the waterfront, but March weather is not always ideal. However, Harmony Marketing had a goal to bring people down to the water, and “sweeten up those winter blues.”

“I think a lot of people who come down may never have had the maple taffy before. When people come down, we have a sugar shack situated right at the entrance, and one at the other end….the whole thing is about the maple taffy,” laughs Symes. The event is enhanced with activities and food vendors, as well as bringing local musical talent to make an outdoor sugar shack a family-friendly event. “It’s a whole interactive experience,” adds Syme.

It says something about Canadians’ eager response to maple syrup, that its fans are willing to brave foul weather for a taste of this traditional, Canadian treat. “Canadians are a very hardy bunch! It was probably the coldest March on record when we took over the event two years ago, and ten thousand people came. We were very, very proud of Canadians, because you just bundle up, take the family and you just go off to the sugar shack!”

Syme adds, “Obviously because it’s in the winter, the cold weather is a factor, so we had contingency plans put in place that helped us a lot.”

This year’s event will have bonfire warming pits, sponsored by the Royal Bank of Canada, instead of propane-based heaters. Both Syme and Nancy Gavin of Redpath’s brand development want to make the Sugar Shack event something that most city slickers would only get in the country.

“The main difference is that we’re not tapping the trees…everything is brought in, but we try to put the urban spin on it, and we do our best to have the best of authentic Quebec food, and sugar shack food: Pea soup, tourtière, pancakes, things like that,” explains  Syme. “So we go after a lot of vendors to have at our marketplace, then we kind “Toronto-ize” it.” Gavin adds that this year’s location is the only major, if temporary, change. “It’s being held in Sherbourne Common, instead of Sugar Beach.

While Gavin cannot discuss any plans regarding the possibility of including their line of cane-based sugar to include maple, she confirms Redpath currently sells a brown sugar/maple sugar  blend. Why is Redpath Sugar focused on bringing a taste of maple to the city? “This part of Redpath’s ‘Giving Back to Our Community,’ outreach efforts,” explains Gavin. She adds that the waterfront location is going through a large revitalization effort, and the population count is rising in what was once a very industrial part of town. “People are coming down all times a year to have fun and be part of the waterfront that we have in Toronto. So this is part of our community engagement plans… it’s part of what we do for Repdath’s Waterfront Festival. So it’s all part of encompassing the community engagement we have.”

“I like just going there and just seeing the people. People are always in such a good mood when they’re at this kind of event. And seeing how much passion they have for Redpath, too.”