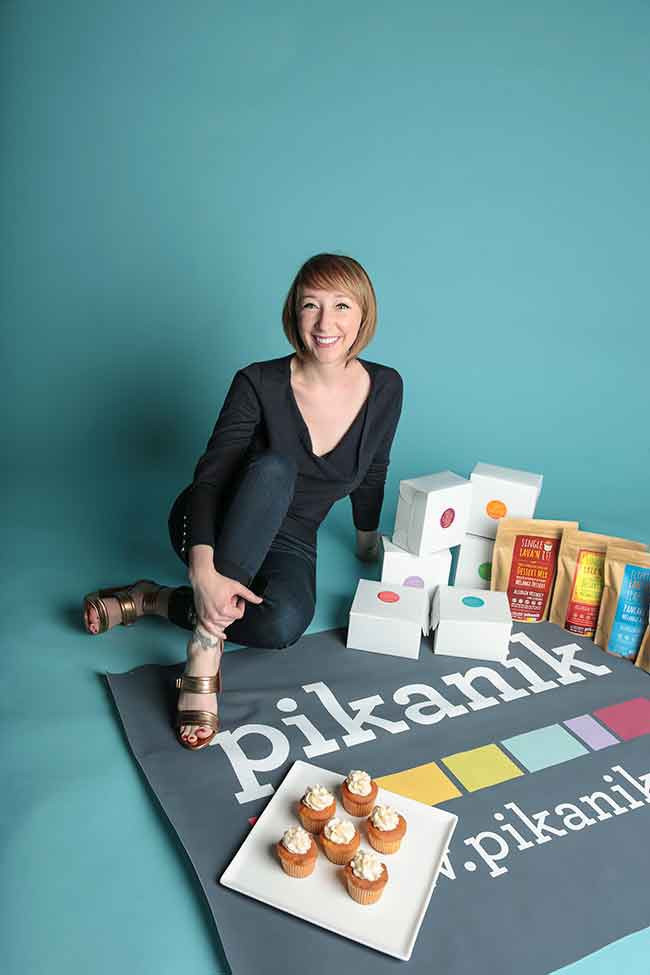 Upon first meeting, Joanna Schultz’s high-energy and fun-loving nature is infectious, but when the discussion turns to business, her focus is serious and it becomes clear she’s relentless in achieving her goals.

Since launching her niche allergen-free bakery, Pikanik, less than four years ago in White Rock, B.C., Schultz has made it her mission to serve the under-served and make her products accessible to everyone.

In the past year she has landed Pikanik products and mixes in grocery stores, opened an online store and she’s now exploring the prospect of franchising. The Pikanik phenomenon is growing, and it’s that innovative drive that has earned Schultz the nod as winner of the Bakers Journal Jake the Baker award, sponsored by Ardent Mills and Baker’s & Us.

A runner up last year, Pikanik stepped up in 2016 and impressed the judges with its continual commitment to product innovation, marketing reach, operations improvements and community involvement. As winner, Schultz received an all-expenses paid trip to Toronto for Bakery Showcase 2016, where she received a plaque to commemorate the achievement.

The beginning
Growing up in Vancouver, Schultz’s introduction to the baking trade began in a high school culinary arts program. During and after high school she worked in food services and catering, eventually spending time at a small family-run artisan bakery. But she found the tasks a physical grind, and heeding her father’s advice to pursue a job with benefits and a pension plan, Schultz transitioned to the corporate world, ultimately landing in a labour relations environment.

“I’ve always had a passion for advocacy, and that was something that drew me to labour relations,” she says. It’s that same core instinct to champion a cause that actually led her back to the baking industry.

Schultz always baked at home for pleasure, but when her three-year-old daughter was diagnosed with allergies to gluten and dairy, she made it her mission to begin exploring new ways to bake.

“I was horrified with the gluten-free items available in stores,” she recalls. “I would buy all different kinds of breads, get home, try one bite and that $8 loaf would go in the garbage.”

Schultz ended up asking herself: “Is this as good as it gets?” From that moment she began researching alternative flours and the principles of gluten-free baking.

“The first couple months were pretty bad, so I thought, maybe this is as good as it gets,” she says. “But once I got some formulas figured out things really started to improve.”

She began baking at home a lot, and people in her office kept telling her that she should start selling her goods. “Well, you hear something enough times and you think, hmmm,” she says with a laugh.

A self-described risk taker, Schultz decided to go for it. The Pikanik name originated from an idea she first had for supplying allergen-free lunches for kids. The meal kits would be like a picnic. It was from there that the allergen-free bakery plan evolved.

All of Pikanik’s products are free of gluten, wheat, peanut, tree nut, dairy and soy, and about 75 per cent are also egg-free.

Part of Schultz’s vision is to create a sanctuary where kids and families with multiple allergies or special diets can indulge without sacrifice. “I felt absolutely compelled to do it. It didn’t even feel like a choice, it felt like it was the right thing to do,” she says.

At the outset her business plan was modest — it would be a small storefront and she would do all of the baking herself. When she opened the shop in 2012 her youngest of two daughters was only two years old. She was back to the grind, but this time with a purpose.

In the early days it was more about trial and error and seeing where things would lead, she recalls. And then demand took off, and her newfound passion for business development began to flourish.

“We’ve gone from very small production, baking five days a week, to becoming a busy storefront with a retail line that is carried in grocery stores — that includes five dry mixes and four frozen products. We also do food service, supplying buns and breads for local restaurants, and we’ve been approached by a restaurant chain to develop a gluten-free dessert for its menu.”

Pikanik now employs up to five staff, including a culinary director, who recently became a business partner, along with two part-time bakers and counter staff.

The rapid growth of the business hasn’t been without its share of challenges. As Schultz explains, removing gluten — which is critical in terms of getting the required stretch, texture and consistent structure in baked goods — required a lot of research. “Because gluten is a protein, what a lot of gluten-free bakeries do is add more dairy products, but I can’t do that,” she says. “So the trick is to find ways to combine various flours and starches to maximize proteins so that I can still achieve a consistent chew, texture, moisture and structure.”

Product innovation aside, another huge challenge is sourcing the allergen-free ingredients she requires. “It’s a tremendous amount of work, and we’re really limited,” Schultz says. “There’s literally one margarine that we can use, and we cannot buy it in bulk — retail sizes only.” And it’s similar with chocolate chips, where she’s found only two sources.

“We have customers who have life-threatening allergies. So I take zero chances,” she says. Pikanik will not use products that are manufactured in facilities where any of the allergens are handled. When she engages a new supplier she’ll go through its allergen lists, supplier checklists and plant manufacturing information. She will even tour plants to inspect how they separate items and their cleaning procedures.

Yet despite the challenges, the effort is worth it when Schultz considers what she has created. She acknowledges that the ongoing gluten-free food trend has worked in her favour, but that was never her core audience. “I think that for people who aren’t just choosing a gluten-free lifestyle, but who for medical reasons have to be gluten-free, they’re relieved that there is somewhere they can feel really safe.”

She’s witnessed the excitement in kids who have never been able to walk into a bakery before. “I remember going to the bakery as a kid, and I can remember very clearly choosing an R2D2 Star Wars cookie and thinking that was the best day ever. It’s just a rite of passage. It’s a shared experience that most of us get to have, and yet there are some people who don’t get to have it. To me, there’s no reason for that.”

Having achieved so much already, Schultz is now passionate about expanding. “I am an entrepreneur, and business development is something I love,” she says. Pikanik has been growing every year beyond her expectations. It’s not only sales that are growing; by innovating with improved systems and better production processes, she’s also realizing increased profitability.

Pikanik’s products are expensive relative to a conventional bakery, but Schultz points out any bakery that’s doing everything by hand and has high ingredient costs has to charge more. “Our margins are not huge,” she admits. “We rely on volume more than anything in order to be profitable.”

To grow the scale of the operation, Pikanik has launched an online store and delivery service, and in an effort to build loyalty and extend its reach, the company recently started a Share the Love referral incentive program. It expects to launch a membership-based VIP home delivery service later this year. Both programs can track data to help Pikanik get to know its customers better and enable more targeted offers.

The company is also sharing and engaging with the public through social media, and it’s tapped into influencer marketing by connecting with a local food blogger.

Gaining additional exposure, Schultz appeared in a documentary-style commercial for Secret Deodorant. “That was really cool: to see my life encapsulated in one-and-a-half minutes,” she says. The video has almost 3 million views on YouTube and has been on cable TV.

Selling online and getting into grocery stores has helped make the products more accessible, but Schultz believes having more storefronts is a great way to expand that safe-haven bakery experience.

She has engaged a franchising expert to explore that avenue. “I don’t want a lot of stores. I’d be happy with one or two more locations in the short term at least,” she says.

“My biggest fear is the constant vigilance required to ensure franchisees are maintaining the standard. We’ve developed a model that will address those concerns, but it’s all about finding the right people to open the franchises, and then the ongoing relationship and support they would need.”

Although her attention has drifted towards growing the business, she’s still very involved in product development. “I can’t turn my brain off, so I’m constantly thinking of new ideas for products.” One particular product that has won a lot of traffic is Pikanik’s honey sandwich bread. “It’s the kind of bread that people try and say, ‘Oh my God, I can’t believe how good this is,’ ” she says. “We sell out of it every single day, and we make more of it all the time to keep up with demand.”

Customers were asking for an egg-free loaf, but with gluten and dairy already removed the eggs are important for protein and structure. Schultz says she had an epiphany one day while driving, and that night went into the shop and started experimenting. The next morning she had the first prototype, and the rest is history.

“We get people who come in to buy that bread and they have zero allergies,” she says. That loaf represents a prime example of Schultz’s ultimate goal: to make quality products that happen to be allergen-free but can be enjoyed by everyone.