In Ontario, It Comes Baked in Loaves 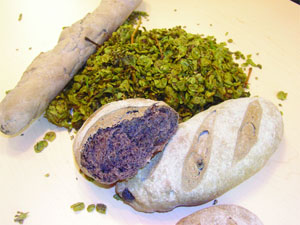 No, your bakery doesn’t have to be licensed to sell bread and other baked goods created from Mark Walpole’s Vinifera for Life’s wine-flour.  This specialty ingredient, made from pomace – the grape skins Ontario’s wine makers normally pay to dispose of – is the brainchild of this certified Chef de Cuisine, resident of Niagara region and hands-on entrepreneur.

“I grew up in this region and really appreciate Ontario wines,” says Walpole, co-founder, CEO and Director of Operations at Vinifera for Life, based in the heart of Ontario’s wine-growing Niagara region.  “As a chef, I’m constantly pushing the envelope, trying unusual blends of flavors, looking for recipes and combinations my customers enjoy.

“And, as a local, you can’t help but notice the enormous amount of unneeded skins that are disposed of in landfills each year.  That set me to thinking on how to make excellent use of what was formerly just waste material.”

Surprisingly, grape skins turned out to have formidable claims to health benefits, according to research done with the Guelph Food Technology Centre (GFTC).  “They weren’t surprised to find the pomace naturally high in fiber,” says Walpole.  “We were delighted with the results that the skins are rich in polyphenols such as antioxidants and resveratrol – substances that help the body protect itself against a number of illnesses including cancer.”

Walpole went to the GFTC not only to find out what exactly was in grape skins, but also to help him determine how best to dry and grind the skins in order to minimize the loss of the functional nutritional components identified.   Walpole says it was the GFTC product development specialists who established the formulations and prototypes he was able to use in his own facility.

“I’m most proud of the fact that Vinifera for Life products taste wonderful – they have no acidic aftertaste, which is a common complaint with food cooked with wine,” says Walpole.  “We knew that any product made with our grape skin flour couldn’t just be healthy – it had to taste good, or consumers wouldn’t buy it, let alone eat it.  We spent two and a half months validating our formulas and expectations of the product, confirming the results we sought to achieve.”

Initially, the wine-flour has been used in the production of bread in the Niagara region with great success.  Four “varietals” are on the market – cabernet, icewine, late harvest and chardonnay.  Walpole and his colleagues have extended their market to Toronto, as well as to grape skin powders, which offer the baking industry applications beyond bread:  the flour can be used to produce crackers, pasta, snack foods, tea, and when ground finer, can even be incorporated into an energy bar or drink.  Products are also being developed with organic growers.

“From the market research we conducted, through the Canadian Innovation Centre, we know that consumers are looking for healthy choices,” says Walpole.  “When offered Vinifera for Life breads, their acceptance was ‘high.’”

Acceptance has extended beyond Canadian borders, with orders coming into the fledgling company from the US, Norway, the UK and Italy.  Functional foods are one of the fastest growing segments in the food industry – as high as $37 billion (all figures in CDN) in the US, $20 billion in Europe, $14 billion in Japan and $2 billion in Canada.  The entire segment is expected to outpace the growth of the food industry as a whole.

“The interest shown internationally is very encouraging at such an early stage in our development,” says Walpole.  “Europeans especially, have always been interested in eating products that protect their health – so wine-flour bread, with its resveratrol, Omega 6 and 3, as well as dietary fiber content, would have enormous appeal.  And, it delivers the superior taste and texture that gourmands need above all else.”

In Canada, through Walpole’s Ontario and Quebec commercial distributor, CK Foods Inc., Vinifera for Life launched a range of cabernet-type gourmet breads banner-wide with a major supermarket chain in October.  He continues to expand into retail venues across the country, as well as both commercially, and through retail globally with PMA International.  Walpole had just shipped three tons of grape skin flour to Italy when we spoke.  The Antinori family, which has produced award-winning wines from their estates in Umbria and Tuscany for 600 years, uses the functional flour for making foccaccia at their restaurant.

Michael Ackerman, CEO of PMA International, spotted Walpole on the Food Network.  “I already imported wines from vintners in Italy, France and Spain.  When I saw what Mark was doing with wine-flour bread, I had to track him down.  My company is all about premium specialty foods, and Vinifera for Life is truly unique.”

Ackerman estimates that they will be shipping up to 200 tons of Vinifera’s wine-flour internationally in 2007.  He’s in discussions with Mexico and China, with new countries contacting him as the good word spreads.

Word has spread in Ontario, with consumer press and celebrity chefs reviewing the functional flour favorably – especially when it’s in a result as superb as one of Brian Kirk’s loaves from Alchemy in Kensington Market in Toronto. Success with the wine-flour wasn’t immediate – it contains no gluten, so it took Kirk a number of attempts before he found the right percentage of Walpole’s flour to regular flour in order to have dough to work with, rather than mush.  He has a number of specialty breads in his bakery, such as hemp and spelt, so working with unusual flours isn’t new to him.

“Every day we designate one of our loaves as the ‘mystery bread’,” says Kirk, owner of Alchemy Bakery.  “Usually, on the weekend, we feature a cabernet loaf, with a copy of the Toronto Life blurb on Walpole’s flours.

“It’s cutting edge stuff, for sure – but white and brown has been done to death,” says Kirk with a grin.  It helps that Kirk has just secured Pusateri’s as an outlet for his wine-flour loaves, and is in final negotiations with Whole Food Markets. Soon, gourmet foodies will be sitting down to a double dose of the French Paradox – a glass of red wine and a slice of Alchemy’s wine-flour bread, giving their hearts extra resveratrol, with less guilt than ever.

And why not?  How often does a gourmet, all-natural, nutritionally dense, functional food like Walpole’s delicious wine-flour bread hit the market?  Not often enough.  One can only hope that at cocktail parties around the globe, soon we’ll be asked, “Would you like chardonnay or cabernet … bread?”

For more information on Vinifera for Life, please visit:  www.viniferaforlife.com.