Grdina puts his 50+ years in baking to good use –  not only consulting, but baking artisan rye breads in the wood-fired oven he built. 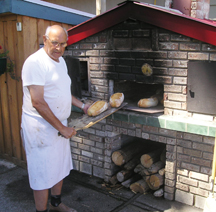 Tony Grdina uses his 50+ years in the baking industry – consulting – even as he bakes artisan rye breads for family and friends in the wood-fired brick oven he built himself.

What brought your family to Canada?
Raising a young family in Europe after the First World War was impossible, with little work, and much of our country in ruins. My father, at the age of 16, emigrated from Slovenia with his family in 1928.  He went to work for the Montreal Bakery in Vancouver, working and saving hard– it was part of his character.  It wasn’t long before he learned the art of baking, and saved enough money to open his own bakery.

Tell us about your family’s bakery.
In the 1930s, Vancouver was much smaller, with craft bakeries providing the majority of breads, pastries and cakes.  Many of the people in our area were new immigrants from Europe, and were used to buying breads fresh daily.  Dark rye and heavy grain breads were most common.

Where did you get your bakery education?
I graduated from Britannia Secondary School in 1956, and was eager to pursue baking.  At that time, there were no bakery schools in Canada, so I talked to my father about going to Chicago or San Francisco.  The Korean War had just started, and the possibility of conscription made me decide to stay in Vancouver.

Who influenced you most during your baking career?
Obviously, my father had the most influence, guiding me in the skills of baking and business. The working hours were long, and, frequently on weekends, we worked 24 hours non-stop to complete the orders. Our bakery production foreman was Albert Morris, a baking graduate from Bristol, England.  His knowledge was vast, and he shared this with me – his young and keen student.

What made you buy the family business?
After working for six years in the business, we had expanded to four stores.  National Bakeries was making a name for itself, but much work needed to be done. The bakery was old, and in need of serious renovations. So my father, knowing my ambitious nature, decided to sell me the business.  We built a new bakery in 1963, and expanded to keep up with the expansion of Vancouver and surrounding communities.  We never looked back, and expanded to 17 locations by 1977, when we sold the business.

During the 1970s, the baking industry was undergoing major changes.  Did this prompt you to change direction?
It really did.  The industry was being developed by the large supermarket chains, who put a fresh in-store bakery in all their outlets.  At this time, after selling the bakery, an opportunity to form a bakery mix company to service the in-store bakeries presented itself.  I joined F.H. Wiley, who (after acquiring Sterling Foods) was the No.1 supplier of specialty bakery mixes in Western Canada.  During the 1970s, it was common to have over 20 different mixes being used by the in-store bakery, from yeast donuts, chocolate and white cakes, variety breads (which could be as many as 12), to bagel and soft roll mixes.

How did you stay in touch with baking when you were working with a bakery mix company?
Funny you should ask that!  Each time a new store would open – the bakery director would ask each supplier to send in a qualified person to supervise his product.  I went in, and made breads and buns with our mixes for five to six days, and we looked on it as a cheap form of labour, at the time.  The camaraderie was great during bakery openings, with 10 to12 bakers from different suppliers, all working to have a great display of products.

When did you get involved in Research and Development?
After working in-store with my mixes, it became apparent that things were changing.  No-time flours were starting to be used more and more, and bakers were expecting the same with the mixes.  No sooner had the dough been mixed, than it was scaled and panned – a big change from resting and relaxing the dough, as in the past.  I had to make our mixes operate the same.  It was during this time I learned much of the science of baking.  Ogilvie Flour provided expertise through Otto Shaibner, and Head Cereal Chemist Brad Morrison, as well as Rudi Bergan from Rogers.  These three people had a major influence on my knowledge of baking science.

What made you return to running your own bakery?
Our successful mix business was sold to another company, and I was left wondering – at 47 – what to do, since I was too young to retire.  So I decided to open my own retail bakery in Park Royal Shopping Centre in West Vancouver.  The baking industry had changed drastically – with competition greater, and the rent and overheads higher – it didn’t favour the small baker any more.  So, after five years, I made the difficult decision to close.

They say as one door closes, another opens.  What happened next to Tony Grdina?
The baking industry is relatively small, word travels fast, and within two weeks one of the bakery directors I had worked with during the ’70s linked me up with a fledgling bakery mix company that was just starting to supply the industry.  My experience in the baking business was a perfect match for this new company.

How easy was the return to R&D?
Fortunately, I had kept all my R&D notes and papers.  Of course, in my 12-year absence, things had changed again.  Gone were the complete bakery mixes, replaced with bases or concentrates, added directly to the flour.  More cost effective and flexible in their use, these newer ingredients extend shelf life and reduce cost.

What has been the biggest change you have had to deal with over your career?
Hard to believe, but most recently, the move out of hydrogenated shortenings to trans fat-free – particularly with the pressure to complete the change in less than a year, without significant price increases.