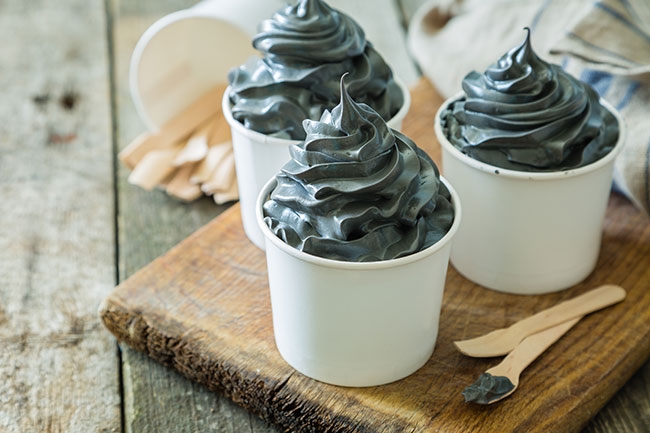 The natural trend has lent itself towards products like popular black ice cream made with deactivated charcoal. Photo: Fotolia

A book recommended to me by a food scientist over a decade ago, A Perfect Red by Amy Butler Greenfield, conveys the history of the grand obsession of intrigue, empire and adventure in pursuit of the most desirable colour on earth. In the 16th century, one of the world’s most precious commodities was cochineal, a legendary red dye treasured by the ancient Mexicans and sold in the great Aztec marketplaces, where it attracted the attention of the Spanish conquistadors.

The English, French, Dutch and other Europeans joined the chase for cochineal — a chase that lasted for more than three centuries — in a tale of pirates, explorers, alchemists, and scientists.

Today, what’s old is new again (minus the pirates), and consumer trust is a priority concern. In particular, they want ingredients that are natural, safe, healthy and traceable. Natural colours provide market value to bakeries aiming for better-for-you positioning. With this consumer trend, there’s been a recent obsession with food images on Instagram, including black ice-cream and black bread coloured with deactivated charcoal. Plus, there are rainbow and unicorn images all coloured by natural ingredients including beetroot, paprika, and turmeric – which not only add natural colour but all have substantiated health benefits.

Instagram will be exploding as a pink chocolate developed by Barry Callebaut could hit U.K. supermarket shelves in early 2018. Hannah Ellis-Petersen of The Guardian reports ruby chocolate, as it’s being called, has been in development for 13 years since the company said it first discovered a new type of cocoa bean during experiments and refinements in their labs. Ellis-Petersen quotes Peter Boone, chief innovation and quality officer for Barry Callebaut: “However, it wasn’t until two years ago that the company decided there was finally a global market for a pink-hued chocolate that was about pure pleasure and hedonistic delight.”

The ‘ruby’ beans are non-GMO and are grown in the Ivory Coast, Ecuador and Brazil.

At IFT 2017 in Las Vegas, I had the pleasure of interviewing Christiane Lippert, head of marketing (food division) for Lycored. Christiane describes: “As in every other category, demand for natural is huge. More than three in five consumers globally now say they try to avoid artificial colours. The benefits for manufacturers of going natural are huge. We’ve carried out research that shows consumers of flavoured milks will pay significantly more for products made from natural ingredients, and we’d expect there to be a similar phenomenon in bakery. So as well as all the clean label benefits, there are major opportunities on pricing.”

What’s also becoming increasing important is the source of the colours. Lippert agrees. “Lycored offers a range of super-stable, naturally derived colours that are ideal for fruit fillings and other bakery applications. Tomat-O-Red is sourced from tomato lycopene and offers a range of vivid reds and pinks.  Unlike some other red colorants, such as carmine, it doesn’t migrate, which is good news if you’re using it in an application such as a fruit topping in a pastry. Meanwhile, Lyc-O-Beta, from natural beta-carotene, provides a spectrum of natural yellows and oranges. Both natural colours are pH-stable, and can withstand prolonged high temperature and intense light, which means longer shelf life and better visual appearance. And they’re both from vertically integrated and specific species, which makes them very trustworthy and traceable. As well as delivering high stability, our colours are non-GMO, allergen free, vegan, kosher and halal.”

Belinda Elysée-Collen, CFS and regional sales manager (food ingredients) for Dempsey Corporation, has noticed the trend of bakers wanting to replace caramel colour with a more label friendly ingredient. Options include molasses syrup, caramelized sugars, and fruit extracts such as Herbarom apple extract. Elysée-Collen explains: “Herbarom is a gluten-free apple extract derived from apples that are gently dried after juice extraction. The colour spectrum of the liquid apple extracts ranges from golden yellow to medium-brown to a deeper brown, depending on the type and dose. The apple polyphenols present in Herbarom can be used to colour the crust and crumb of gluten-free bread, for example, so that it looks just like its conventional wholemeal
counterpart.”

Due to consumer demand and priorities, the natural colour market continues to grow significantly and personally I can’t wait for one more — Barry Callebaut’s ruby chocolate!