Cereals scientist, food technologist, consultant and home baker Quentin Johnson of Rockwood, Ont., is among a small group of international experts who travel to the world’s poorest countries to advise UN and non-government agencies on staple food fortification.

Cereals scientist, food technologist, consultant and home baker Quentin Johnson of Rockwood, Ontario, is among a small group of international experts who travel to the world’s poorest countries to advise UN and non-government agencies on staple food fortification. With more than 35 years of experience in product development, quality assurance and regulatory affairs, Johnson is the man for the job. We caught up with him after a recent trip to Cambodia.

What led you from chemistry to the baking industry and product development?

I didn’t want to be a test tube jockey all my life, so a career in pure research didn’t appeal. If I wanted to be useful, I decided I should know something about business, so I studied economics in university along with chemistry. I developed my love for milling and baking working in research labs for Associated British Foods, the U.K. arm of the Weston family.

Working in Canadian labs is a long way from advising UN agencies and international NGOs on staple food fortification.

The day after my job disappeared at Maple Leaf Mills, in 1991, the company’s biggest customer called to say they needed my help. I’ve been self-employed ever since. In 1996, the Micronutrient Initiative in Ottawa called (www.micronutrient.org), looking for a consultant. Two months later, I was on a plane to Bangladesh. 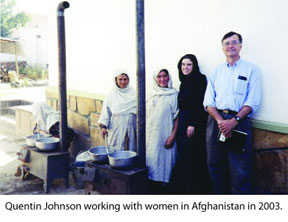 What is the focus of your work overseas?

In 1992, the first UN summit for children recognized that “hidden hunger,” or micronutrient malnutrition, causes significant health problems for children. Missing iron and iodine are linked to poor cognitive skills and brain function, a lack of Vitamin A compromises the immune system and a lack of folic acid in women contributes to neural tube birth defects. Fortifying flour is one way to get these nutrients into the people who need them. Having adequate vitamin and minerals in the diet not only improves health and cognitive function, it also improves a country’s productivity.

How does your work in large sophisticated Canadian mills translate in developing countries?

In African refugee camps and villages, flour is often processed in a small hammer mill in a thatched hut. My first reaction was that it’s impossible to fortify flour safely on such a small scale. Then, in Malawi, I realized: Who am I to say it can’t be done? I was trying to impose Western standards on their food processing system. With World Vision support, we came up with a simple technology to fortify food for 100,000 people with a powdered premix containing B vitamins, folic acid, iron and zinc.

What is your proudest accomplishment to date?

Since 1996, our merry band has introduced the fortification of wheat and maize in 20 countries, the equivalent of half a billion people. We certainly don’t do it for money. If I feel I can help to improve someone else’s life in some small way, that keeps me going. So far, I’ve visited 67 countries.

How do locals react when you announce you’ve come to help them fortify their bread?

Bread is sacred in much of the world. In Egypt, for example, the word for bread means life. After 30 years of talking about it, the Egyptian government has finally agreed to fortify flour. I provided some support to agencies such as World Food Programme and UNICEF, who got the government to move on it. This has the potential to improve the health and lives of 55 million people.

What can Canadian bakers do to help?

Guatemala, Honduras and the poorer parts of Mexico are in dire need of expertise to help them produce better bread, as are countries such as Indonesia and Vietnam which are beginning to consume more wheat. A few Canadian bakers have already travelled abroad providing much-needed technical and marketing support to their brothers in other countries through the Canadian Executive Service Organization (CESO).

What interesting foods have you tasted on your travels?

I’ve eaten white steamed buns in China and Afghan flatbread baked on the streets of Peshawar. It’s so good you suddenly realize you’ve eaten half a kilo of bread. I love India’s fried samosas, and the flaky Middle Eastern sweets in Jordan filled with dates and nuts are the best in the world. I’m less keen on Africa’s thick maize porridge, which needs a sauce flavoured with vegetables and spices such as cardamom, nutmeg and chilies. In Cambodia, I passed on grilled tarantula.

Does being a Canadian make your work any easier?

Canada’s bakers and millers are spoiled rotten because we have the best, most consistent wheat in the world. When I tell people I’m Canadian, their attitude changes. They hold Canada in high esteem and appreciate the fact that we’re there to help them. Yet every time the plane touches down in Toronto, I’m thankful to be home. We have no idea how lucky we are.

Quentin Johnson can be reached at quentin@quican.com.