He’s been a proponent of alternative sources for oils and grains since the early ’90s – long before it became trendy to do so. 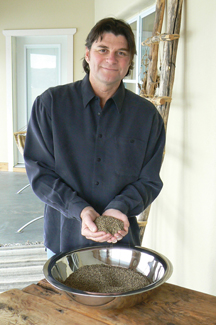 He’s been a proponent of alternative sources for oils and grains since the early ’90s – long before it became trendy to do so.  Greg Herriott started his company, The Oilseedworks (www.oilseedworks.com), 12 years ago.  We caught up with him recently to get his take on hemp’s recent rise to the top of the food trends list.

What’s your background?
I majored in landscape architecture, so the interest in plants goes back to my early career.  I eventually moved into graphic design and communications roles before getting involved in specialty oils and seeds.

How did you get involved in specialty seeds?
My wife is a physiotherapist.  She has a strong passion for wellness, and we became aware of the wonderful opportunities that existed with renewable, agricultural oilseeds in the early ’90s.  We were hesitant at first to jump in too quickly, but our research convinced us that this sector could have great growth potential.

Your company perfected oilseed cold pressing.  Tell us about that.
We use a technology we’ve called “the Hempola® Method.”  We developed it in 1998, and our process for making our oils is focused on extremely low temperatures, which results in painstakingly slow throughput, to avoid friction, which causes damaging heat.  We put incredible effort into the oils we make, much like fine wine. We strive to source local oilseeds, grown by the farm producers we’re familiar with, so we can vouch for their pride and quality.

What types of products do you sell?
Our Oilseedworks oils include hemp, flax, sunflower, canola and soy. Our innovative Omegola™ 369 blend is also available.  Our packaging formats range from 250-mL bottles up to 1,000-litre totes (larger flexi-totes are also available under contract).  We also sell OCPP-certified organic oils.  All Oilseedworks oils are Kosher certified.  We also produce a variety of powders and flours, including hemp, flax, sunflower, roasted soy and our unique Omegola™ 369 blend. All Oilseedworks powders and flours are Kosher certified as well.

You have done a lot of work with hemp.  Were you concerned about market misconceptions about this crop?
We were hesitant, initially, to deal with hemp, because 15 to 20 years ago the marketplace didn’t recognize it as being a distinctly different crop from marijuana.  Hemp is a cousin of the cannabis plant, but the THC levels (the mood-altering ingredient) are miniscule in hemp.  There isn’t enough to cause any effect on the human brain.  Our research showed that hemp’s benefits far outweighed any marketing challenges we may have to deal with.

What are some of hemp’s benefits?
Hemp is about 40 per cent protein, and the cold pressed oil from hemp seeds provides the highest concentration and ideal ratio of essential fatty acids – Omega 3, 6, 9 and GLA.  Hemp boasts a high level of naturally occurring antioxidants. These antioxidants keep this oil stable and fresh, for months at room temperature. It also contains no known allergens.  Hemp is a very hardy plant, and therefore can be grown without using pesticides.

Tell us about your hemp flour.
We developed Hemp Seed Flour in 1998, and were the first to do so.  The flour has 10 per cent of the fat left in when milled, and 80 per cent of the Omega 3, 6, 9.  The flour is quite high in dietary fibre – about 35 per cent.  It is a dense flour, so we recommend an inclusion rate of two per cent – 15 per cent for breads.  It’s been blended as high as 50 per cent in some pastas, and works as a substrate in most products.

Is this crop an opportunity for Canada?
Yes.  Currently, Canada is the only North American country where growing hemp for industrial purposes is legal.  It became legal to grow industrial hemp here in 1993; so, we’re quite progressive, as far as North America goes.  Though there’s a lot of positive “marketing buzz” around hemp right now, we’re still guarded in our excitement.  It took canola oil about 40 years to gain true momentum, after being re-branded from its first name – rapeseed.  When a product must shift its image, it takes time to educate the marketplace, and hemp is just at the turning point now, in terms of its image.

How should the industry deal with marketing hemp as an ingredient?
I truly believe that it’s best to focus on the myriad benefits that hemp has, and not even try to deal with the negative connotations.  Focus on the fact that it’s rich in protein, Omega-3 oils, grown without pesticides, and that it’s grown in Canada.  Attempting to do an end run around all of the concerns will only draw attention to the misconceptions, and the marketing message will end up bogged down in controversy.  Dempster’s has recently launched a bread that includes hemp as an ingredient.  They’ve quietly included it on the ingredient listing, and haven’t made a big deal of it.  We display the hemp leaf image as part of our logo, and have received positive feedback from the government for being upfront in our branding.  With time, hemp’s positive aspects will prevail.

So what’s next for Oilseedworks?
We’ve been pretty focused on our goal since the beginning.  Our company is devoted to developing innovative products from renewable oilseeds.  We’re staying the course, and staying true to our original mission — to make wholesome, raw materials to fuel bodies and vehicles, and to heat homes.