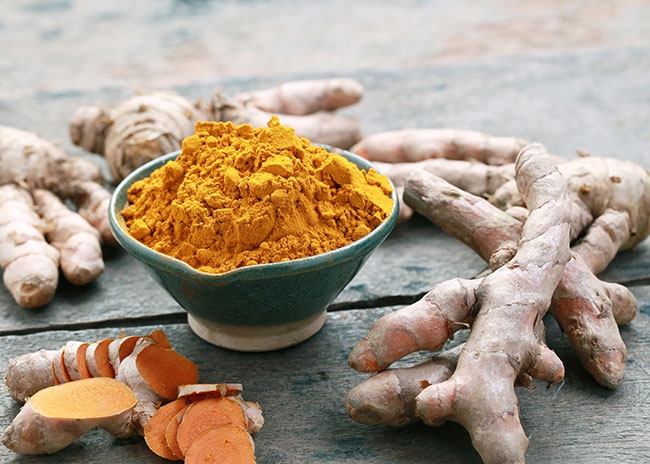 Part of the ginger family of herbs, turmeric has a peppery fragrant profile and can be incorporated into sweet baked goods. Photo: Shutterstock

Native to Indonesia and Southern India, turmeric has been harvested for more than 5,000 years and has been used throughout history as a condiment, healing remedy and a textile dye. It’s a spice with a peppery fragrant flavour, and it’s part of the ginger family of herbs. Often used in curries, sauces and soups, most recently, turmeric is popping up in teas, drinks, smoothies, breads and baked goods.

Turmeric has become a more mainstream ingredient in Canada and the U.S. for a variety of reasons including its health benefits. In a recent NutraIngredients-USA article (September 22, 2016), Stephen Daniells summarizes the data published in ABC’s HerbalGram 111 report. It indicated turmeric/curcumin was the standout ingredient in 2015 with overall sales for the ingredient exceeding $50 million in mass and natural channels. It has a 118 per cent growth in the mass channel and 32 per cent growth in the natural channel.

We know that a poor diet, lack of exercise, and stress can lead to an increase in inflammatory-related conditions which are key factors in lifestyle diseases including heart disease and type 2 diabetes. From my experience, people are always searching for more everyday foods that taste good and are nutritious. Turmeric is nutritious and is rich in B vitamins, which promotes a healthy nervous system and assists in metabolic functions throughout the body. In addition, turmeric has been used as an anti-inflammatory.

The active ingredient that has been studied in turmeric is curcumin which is responsible for its deep yellow colour. Research continues to investigate the properties and effects of curcumin specifically as an antioxidant and anti-inflammatory. It is thought curcumin plays a role in combating the production of free radical cells and decreasing inflammation which are factors in a variety of disease conditions. More human clinical studies are required in order to fully understand curcumin’s role in reducing the risk of certain diseases including Alzheimer’s disease, heart disease and type 2 diabetes, arthritis and some cancers.

The first time I had turmeric in a cake was when I was traveling in Turkey. I believe it was a version of sfouf, which is a traditional Lebanese cake flavoured with turmeric, sugar and nuts. It was a moist, dense cake with an intensely yellow colour. Not having an overly sweet tooth, I like cakes with more of a savoury and/or nutty essence. It was delicious. That was over 15 years ago, and now locally in Canada I’m seeing a few breads, cakes and other baked goods with turmeric.

Turmeric is a traditional ingredient in Indian bread including naan. Sometimes it is an ingredient in the blend or part of a mixture of butter and turmeric that is brushed on the naan and baked until golden. As the Paleo diet trend continues to gain traction, I’ve witnessed more gluten-free breads and wraps made with turmeric. Including a wrap made with coconut meal, coconut water, coconut oil and turmeric, specifically targeted at the niche market.

Restaurant patrons in diverse cities like New York are enjoying turmeric fennel rolls and sweet potato turmeric buns on the menu. On the dessert cart, there is a trend for more savoury whipped creams. Turmeric lends a pale yellow colour to whipped cream, making it unique to look at. It’s slightly earthy bitter flavour is a great contrast to nut-based desserts like pecan pie or walnut cake.

As I’m writing this article about using turmeric in breads and baked goods, it reminds me of six years ago when I wrote a Final Proof column on baking with matcha green tea. It still may be slightly ahead of the trend and the customer conversion point is a few early adopters. Turmeric has common elements to the matcha green tea trend including an ingredient that has been used for centuries in other parts of the world, definite health benefits, plus a strong, unique flavour and colour. Six years later, after writing the matcha green tea column, there is mainstream awareness, acceptance and use of it in breads, cakes, crepes and muffins. So why not dive in and create a delicious feature product with turmeric to offer your early adopter clientele a golden savoury treat?