Ian Gallacher chose thrusting his fists into dough rather than another opponent’s face … read about his rise in the profession of baking. 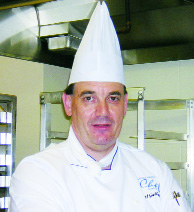 Ian Gallacher, a pastry chef with a wicked sense of humour, adores his current job teaching students at George Brown College in downtown Toronto. He’s worked at fine restaurants and hotels from the Connaught in London to the Four Seasons in Toronto.

What led to your decision to emigrate to Canada?
I arrived in 1982, when Maggie Thatcher was in power and it was time to leave. I was offered jobs in South Africa, Australia, two in the U.S. and one in Canada. Canada won, and here I am. I arrived in Toronto in –22 C weather. As the plane circled to land at Pearson, I looked out the window and saw white. I thought I was looking at cotton fields!

How long have you worked at George Brown? Please describe a typical week on the job.
I’ve been here five years full time and five years before that teaching Continuing Education classes. At present, I work two days in the office (yuck!) and teach three days for four hours a day. The rest of the time is spent with students and developing and driving the program.

Please describe the George Brown course.
We offer a one-year Baking Pre-Employment course and a second year of Baking and Pastry Arts Management. Classes include baking and pastry theory and skills, dessert menu management, computer skills, nutrition and production management along with 20 hours in the industry.

Who are your students? Where have they come from and how are they doing?
Our students are a cross section. We have mature people, people looking for a career change and some kids right out of high school. Unfortunately, some are looking to kill a year while they decide what to do with their lives. The ones that “get it” and want to participate in the industry are an absolute joy. Watching them go from not knowing how to tie a necktie to being able to run a class is a privilege.

When did you realize that you wanted to pursue a career in pastry?
The day I realized my father wanted me to follow in his footsteps. He was a boxer, and getting punched in the head for a living didn’t appeal to me. I decided I’d rather get kicked in the ass so I went into baking.

Was there a person or event that influenced you to go into pastry?
Many. First was my father, then my high school cooking teacher. I was the only boy in a class of 24 so I took a lot of verbal abuse. Dad wasn’t too thrilled when I came home with a pot of jam and his friends sons’ had made things from wood and metal. I think the day we knitted a scarf really done him in. After that, I was lucky enough to work at the Connaught Hotel in London under Pastry Chef Wally Ladd and Chef Michel Bourdin, the man I still call my Chef. In Canada, my greatest influence has been Peter Oliver, who I worked under for 10 years as Executive Pastry Chef of Olivers Restaurant. Straight down the line it’s quality, quality, quality!

Did you take a course or plunge into an apprenticeship?
I left school at 16, went to college for a year then moved to London to start my apprenticeship (City and Guilds) at the May Fair Hotel under pastry chef Michael Nadell, a truly vicious man. I was put in the pastry kitchen, and loved it. That’s where I learned to treat employees with due respect and not like garbage. I’ve never lost my love of the culinary side, however.

What did you find most challenging when you first began working in pastry?
Apart from living in London, long hours and low pay, it was an exciting, thrilling time.  After growing up in a house where “If it ain’t fried, it ain’t food” was the mantra, I thought I’d died and gone to heaven. All those wild and, to me, exotic foods and meat that was pink even after it was cooked. It was an exhilarating experience.

What would you list as your greatest rewards in your professional life?
Being alive! Still!! Teaching is very rewarding. It may be a cliché but it’s true. This industry is a younger person’s game and my knees aren’t up to it anymore. So now I can have an impact on the people going into the industry, either telling them this isn’t for them or trying to inspire them to excel.

How did you make the transition from working in the industry to teaching?
Through a phone call. A very good friend of mine, Catherine O’Donnell, was working here at George Brown and asked if I would like to teach part time. I never looked back.

What qualities do you consider essential to become a successful baker?
An understanding of the market and learning to balance quality ingredients with customer satisfaction.

Where do you find inspiration in your work?
The students. It’s instant payback, watching them grasp a skill then take it to a level where it’s sometimes better than I can do.

Have you seen many changes in the baking world since you began?
Yes, but mostly for the worse. I dislike chemical additives, packaged mixes and the like. Sometimes I feel like a dinosaur. In the 1980s, wholesale killed the hotel bakeshops, but they’re slowly coming back. Customers seem to be more educated and they drive the marketplace. If they won’t accept crap, hopefully our industry will stop manufacturing it.

What trends do you see in baking today?
Consumers seem to be more health conscious and want better ingredients, though when they hear the price they’re quick to tell you they can get it cheaper down the road.

If there were one message you would impart to students and to colleagues, what would that be?
I tell my students to practise, practise, practise and have fun. Never lose sight of your standards and pass them on to others. As for my fellow teachers, keep your skills current!

Do you cook or bake at home?
At home I cook more than I bake. I guess it’s like going to a plumber’s house and the taps drip. I love cooking.

What tool do you find indispensable in your work?
My palette knife. I’ve had it for 20 years and I could pick it out of a pile blindfolded. I’m sure it talks to me sometimes. Unfortunately, the computer is also invaluable.

One final note?
I’ve basically spent 30 years learning my craft, and I’m very, very lucky to be in a position now where I can pass on those skills. I love my job.