Frank Fowlie has yeast in his blood, having grown up in his father’s bakery and spent more than 50 years in the industry. 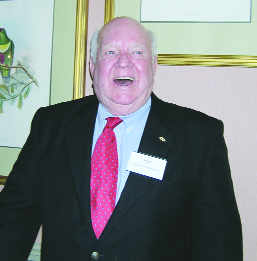 On November 20, Fowlie retired from Montreal-based Lallemand Inc., 11 years after retiring from Rose & LaFlamme.  In 2005, Frank was made an honorary member of the BAC.

What are some of your memories of growing up in your dad’s bakery in Dundas, Ont.?
Among other jobs, I was the delivery boy at lunch and after school. My 10 per cent commission went to a bike fund, as I’d wear out a bike every year. I also prepared the pans for baking. At Christmas, I’d take fruitcake orders and at Easter, my sisters and I would take orders for hot cross buns and deliver them hot on Good Friday.  My parents were very smart, as that money went toward our Christmas gifts and Easter clothes.

What was your first job in the industry?
I worked in my father’s bakery until 1946, and then spent 17 years as plant and production manager for Fishers Bread in Kitchener. In the early days, we still had horses on the road pulling bakery wagons. When Fishers was bought by Canada Bread, I became the first salesman at Dundas Valley Foods – a shortening company – later bought by CSP Foods. At that point, I didn’t even know if I could sell or not, so I was grateful for the opportunity they gave me. I left in 1968 to join Rose & LaFlamme, as sales rep for western Ontario.

Where did your work with R&L take you?
In 1970, I was promoted to sales management and looked after the emerging in-store supermarket bakeries. I wrote up the first order for Zehrs’ new bakery, and a month later Miracle Mart called. Every week after that, it seemed like another in-store opened. I was fortunate we had those guys with us. Our job became finding and developing new products for their use in our R&L product lab, in co-operation with Don Edwards, Q&A in the Montreal plant. We also developed new fillings and fondants for chain donut operations, like Tim Horton and Country Style. I also helped to pioneer fillings and other products for the frozen lines that were starting to hit the bakery business. I’ve seen the rise of frozen dough from its inception to large-production bakeries, frozen pie plants and special dessert plants.

How were you instrumental in bringing the first instant yeast to North America?
R&L gave me the freedom to find and develop new products. We knew there was an instant yeast out there, but nobody knew where to find it; and I was continually told it didn’t exist. I looked all over for three or four years – it was fun because I’m such a snoop. Then, in 1974, I got a sample of Fermipan Instant dry yeast from Gist Brocades in Delft, Holland. After much discussion (and after making sure that it worked for our customers) we brought the first container of instant yeast to North America.

How about another example of your many successes over the years?
Our aim at R&L was to be a one-stop shop for the baking industry. In 1970, we began selling cookies in 5-lb. trays that the baker could put right in his display case. People joked that selling cookies to bakers was like selling ice to Eskimos, but a former colleague reminded me that he’s sold over a million of those cookies. We also brought Puratos to Canada from Belgium in 1980, with a line of dough improvers.

What prompted your first retirement and what led to your second career?
With all the changes to the company in 1994, I couldn’t see myself fighting for a job at age 69, so in December I decided it was time to give retirement a try. By the following October, however, I was climbing the walls. Then a Zehrs bakery director called to say he was having problems with his yeast. I got involved – reluctantly – and contacted Lallemand, to suggest ways to solve the problem. When they suggested that I come and work for them, I was ready. Jean Chagnon and I had been friends for a long time, so it was a good fit. I had planned to stay for two years, but they were such great people to work with, that I ended up retiring
exactly 11 years later.

What’s one bittersweet change you’ve seen in your long career?
There was a time when a salesman would call on three or four bakeries in every small town, each with its own specialty items. Though some great small-town bakeries remain, the in-stores have taken over.

So, do you think you’ll retire for good this time?
Well, I’m now 81, and grateful to my family for their support during all the years I worked and travelled in the industry. As for plans, one never knows where the road will lead.