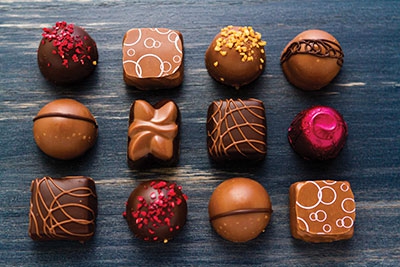 You’ll find plenty of chocolate at Bakery Showcase. Here’s a look at the trends being set by award winners.

If you subscribe to Netflix and like French films, you might have seen Romantics Anonymous, a light comedy about a chocolate maker who’s about to lose his business because his buyers don’t like his chocolates anymore. Teetering toward failure, he decides to fix things by getting a new sales rep. Enter our heroine, a gifted chocolatier who’s so painfully shy she can’t explain that she’s shown up for the interview thinking it was for making chocolate and accepts the sales job anyway.

Three things about of this film stand out when it comes to thinking about the business of trends in chocolate.

1. Sample case in hand, our heroine goes from buyer to buyer, none of them biting. They’re tired of the old stuff. They want to see something new. A lack of new ideas can drop a wet blanket onto a product line. You don’t have to be an out-there innovator, but you have to have skin in the game.

2. The film has some lovely chocolate-tasting scenes: the careful first bite, the snap of the square, the crack of a filled chocolate, the outpouring, the resting on the tongue, the melting, the recognition of supporting flavours, eyes closing, eyes opening, eyes rolling. I never get tired of the swooning or watching the swoon. That’s a chocolate maker’s ideal finish line; put on this earth to make customers happy. It’s a worthy calling.

3. There’s a chocolate competition. Instead of spoiling the film’s ending, we’re going to fast-track to the current winners of the Canadian Chocolate Awards. We’re looking for industry-topping flavours, styles and stand-out ideas. Some of them are going to come out of left field. Some are going to be humble, despite their accolades. And we’re going to follow these winners into the international competition, to see if the ideas stand up globally.

Vancouver brings a lot of exceptional work to the table. Beta5 Chocolates is impossible to ignore. Nationally, the company took gold medals for its Black Olive Bar, Fisherman’s Friend and Bay Leaf; and a silver for The Whole Cherry. Apart from that cherry, you did not see those flavours coming. They are ridiculously far out on that limb, but the awards show Beta5 can pull them off. Internationally, Beta5 took gold for Fisherman’s Friend, and Silver for Black Olive Bar and The Whole Cherry, potential proof that these ideas have a wider audience.

Edmonton is home to Violet Chocolates. Their Honey Rosemary Bar won gold, but it didn’t advance internationally. It’s worth comparing it to B.C.’s Denman Island Chocolates, who make the Rosemary, Baby bar. It comes with a tasting note — and warning: “Tastes like a walk in the forest, not for everyone.” I love this disclaimer. For those who get it and want it, this company has it. Outliers often become signature items. They’re not top sellers, but they’re good for the brand.

Also from Edmonton is Sweet Lollapalooza, who took a silver nationally and internationally for its Pure Nacional, named eponymously for the Peruvian cocoa plant thought, until recently, to be extinct. The name implies the chocolate is more important than anything the chocolatier might do to it. It’s part of our growing knowledge of the geography of chocolate, including our appreciation for single-source chocolates as valuable purchases for the sustainable practices connected to many of them. This trend advances chocolate generally, and you get points for that. If you use single-source, share your chocolate’s GPS with your customers. Support the necessary markup by putting some good quality chocolate at your checkout. They can do the math. They’ll appreciate the value even more.

From Toronto, Moroco Chocolates took two golds nationally and internationally for Sub’Lime. You wouldn’t think a green square of white chocolate ganache infused with vodka and aromatic lime would work. But, it did.

From Montreal, Christophe Morel Chocolatier took national and international golds for Palet Or Pure Chuao and Pecan Pie. He took national silvers for Black Forest, Coriander & Orange Praline and Marcona Almond Praline. International silvers went to Palet Or Chuao, Coriander & Orange Praline, Pecan Pie, Marcona Almond Praline. (Worth knowing: Palet is French for disk, and or means gold. The chocolates are flecked with gold-foil. Chuao is on the north coast of Venezuela, a key source of high-quality chocolate.)

Morel is a traditionalist, but he also has a sense of humour. Pecan Pie and Black Forest are throwbacks, pointing to the adage: “Old ideas are new again.” There are so many great ideas, it’s no wonder we lose track of some, which is why resurrecting classics can be a good move. And walking out on that limb with what you think is a great idea – that’s a good move, too.