A winning Winnipeg bakery stays true to its German roots 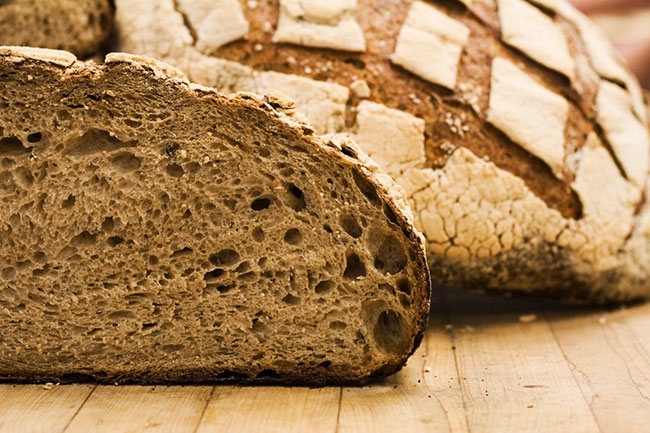 At The Crusty Bun, breads rest for up to 24 hours, which creates a lot of flavour and a specific texture and crust. Photo credit: The Crusty Bun

When German expats Frieda Brandt and Andi Ingenfeld moved to Canada in 2006, they did so with a clear vision and purpose in mind: opening their own bakery. The husband-and-wife duo put down roots in Winnipeg, a city with a large German population but little to no German bakeries. The odds were in their favour.

Having been a baker since the age of 14, Ingenfeld honed his craft for many years abroad, including in Switzerland, the United Kingdom, Japan, as well as his native Germany. He completed his training as a master baker in 1995. His dream of opening a bakery was a natural next step and Canada was the place to do it. Brandt’s 22 years of experience in administration and management was the perfect match to get their business off the ground. In March 2009, Brandt and Ingenfeld opened the doors to their dream: The Crusty Bun Bakery and Cafe. In August 2017, their vision grew with the opening of a second location.

An open-concept, retail bakery, The Crusty Bun’s original location on St. Mary’s Road in south Winnipeg has seating for 36, while its new northeast location on Headmaster Row seats 34.

“The open-concept is exactly what we had in mind,” said Ingenfeld. “People can see what we do in production; the cleanliness of it. It gives it that transparency. There’s nothing to hide and it works both ways: For employees it’s nice that they can see what’s going on up front and for the customers they can see what’s happening in the back,” added Brandt.

The Crusty Bun serves up traditional European-style artisan bread and buns that stay true to the store’s name, offering a textured, flavourful crust that can only be achieved through a time-intensive process. “We believe in proper baking time wise – slow baking – meaning we give our doughs a lot of resting time. Most of our bread and buns have a resting time of 24 hours, so that creates a lot of flavour, a certain texture and a certain crust, and people really, really like it,” said Ingenfeld.

The bakery’s most popular products include crusty buns, pumpkin seed buns and bread, farmer’s bread and a two-kilogram loaf that has a three-day resting time. And while you won’t find any custom-made birthday cakes or tortes in these display cases, your taste buds will be tempted by traditional European desserts including sheet pan cakes with fruit, streusel, and the ever-popular “Bee Sting Cake,” which is a yeast-based dough with a vanilla cream filling, topped with roasted almonds and honey. A light lunch is also on offer, with homemade soups and sandwiches made fresh daily, and of course, delicious coffee.

“We have a very loyal customer base here from St. Mary’s Road,” Brandt said. “We are very close to a big shopping mall and business offices, so we have a regular lunch crowd. On Fridays and Saturdays we have customers come from out of town to pick up big orders. With the large German populations around Winnipeg, when they come to the store they shop big.”

The Crusty Bun has found success based on a unique system that incorporates three vital principles: slow baking, operating like a large-scale bakery despite its small size, and employee development.

Ingenfeld’s slow baking process can take up to three days, which creates a tremendous flavour as the sugar in the dough breaks down. With the rye flour and the starter dough being prepped daily, followed by mixing, proofing and shaping of the main dough, the final product is packed full of taste and customers say has good digestibility. “We have customers who have gluten sensitivities and they can easily digest our bread because of our slow process,” says Brandt.

Ingenfeld uses the imagery of a ripened banana to make his case: “If you eat a green banana, of course you don’t die from it, but it has less flavour and it may cause stomach pains. When you eat a banana that is ripe and at its peak, it’s flavourful and easy on the stomach. To get the right flavour with the dough, you need a longer resting time so that it can do the work it needs to do.”

The idea to operate like a large-scale bakery comes from Ingenfeld’s previous experience in Germany where he managed 60 stores. “In production, we operate almost like a big business. For example, when we do Danishes or croissants, we use big batches, but then we put them in the freezer as dough in individual pieces and we take them out as we need them each day. They’re always baked fresh in the morning, but our system is based on a big production operation.”

The Danishes and croissants still enjoy a long proofing and baking process. Ingenfeld noted that they’re taken out of the freezer a day before baking and go into the retarder-proofer at seven degrees celsius. The following morning, they are removed from the proofer and are baked. “It takes the pressure off in the morning. We start with the baking and then we move onto mixing and preparation for the next day. The disadvantage is if we run out of a product, we can’t say ‘Come back in an hour and we’ll have it.’ We need the 36 hours to complete the baking process.”

By operating like a large-scale bakery, Ingenfeld and Brandt have realized some big advantages, including increased efficiency and smoother operations in the kitchen.

The third principle to The Crusty Bun’s success is employee development. The bakery has grown from three employees in 2009 to 34 staff today. In fact, the reason the pair opened their second location last year had as much to do with their amazing employees as it did with surging customer demand. “We can’t swing this operation on our own,” said Brandt. “It all depends on having good staff and we’ve been very fortunate. The success of our second location is due to our employees. They really helped to get things going over there; we have great support in that way. If the opportunity shall present itself again, if we think we have too many staff on our hands that we don’t want to let go, we might even open a third location. But we just opened Headmaster, so we’ll see!”

Many of the bakery’s employees have come from the baking program at Red River College and have continued on with The Crusty Bun. Another staff member, who started working for them straight out of high school, has risen through the ranks and found his calling. “Our head baker at our Headmaster location came to us when he was 18, right from high school, and now he’s been with us for four years. He just finished his Red Seal in British Columbia and at 22 years old is a head baker. He’s very diligent; he’s super,” said Ingenfeld.

An emphasis on furthering one’s baking education is evident at The Crusty Bun, with four of its staff members, including its head bakers, recently travelling to Germany for a five-week international baking course. “They learned a lot,” Ingenfeld said. “It was a great success. It’s all about networking.”

When friends who also own bakeries in Germany come to visit Brandt and Ingenfeld in Winnipeg, they always arrive with one very important item: a new recipe. Combined with seasonal change-ups to the menu, customers are never without a new product to delve into. “We feel very connected to the baking world in Germany and when our friends bring one of their recipes, we try it out here,” said Brandt.

With inspiration seeping out of every corner, The Crusty Bun, is poised to see continued success providing Manitobans with authentic German baking.