From old-school to new styles, the bagel is as loved as ever 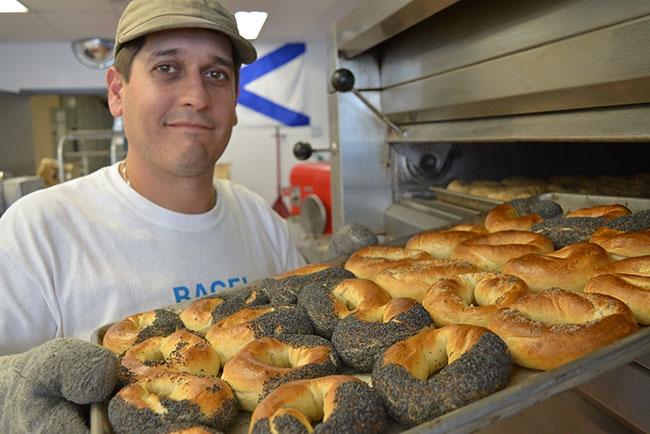 Bagels are like The Beatles of baking: an original rock star with legendary backstory and legions of enduring fans. Much like The Beatles experimented with sounds that strayed from their early days, the bagel is also finding its own version of Sgt. Pepper’s.

The exact origins of the venerable bagel are a bit murky, describes Canadian Encyclopedia online, who dedicated a page to the history of the Montreal bagel, an iconic Canadian product. It might have been a Jewish-Viennese baker in the late 17th century creating bread in the shape of a stirrup (beugel in Austrian German) as a present for King of Poland, John III Sobieski. The beugel became a part of Polish cuisine, and a common gift for new mothers.

The Montreal bagel arrived in Canada with eastern European Jewish immigrants in the early 1900s. Two businesses cemented its place in Canadian food history. Isadore Schlafman opened the Montreal Bagel Bakery in 1919, then moved to Fairmount street and opened what was to become The Original Fairmount Bagel Bakery in 1949. The bakery is managed by Schlafman’s grandchildren today, and still maintains plenty of fans. Greg Chamitoff, an astronaut, even took Fairmount’s bagels to space with him.

Hyman Seligman and Myer Lewkowicz opened St-Viateur Bagel in 1957 in the same area of Montreal. One of its future partners, Joe Morena, was only 15 when he started working there, reports St-Viateur’s website. Morena partnered with Lewkowicz in 1974, and they worked together until Lewkowicz’s death in 1994. Morena and Marco Sbalno partnered to continue the business. In 1996, Morena, his sons Vincenzo, Nicolò and Roberto, and business partner Sbalno, began to expand with new locations, an online bakery and service into the U.S.

St-Viateur celebrated 60 years in May with a big block party fundraiser that brought in $62,000 for the Foundation of Stars, an organization which supports research into childhood diseases. St-Viateur, a Montreal original, also remains a thriving landmark.

Vince Morena, along with his brothers, have been working in the St-Viateur bagel shop since they were teens. Whether its New York style or Montreal style, he points out that they all come from same Jewish-Polish origin. Montreal bagels are often thought of as denser and sweeter while New York style is softer and fluffier. The debate of superiority rages on in many circles. Morena views Montreal bagels as retaining an old world style while New York bagels have incorporated more modern technology.

At St-Viateur, bagels are hand-made, boiled and baked on wood. The production rate is 35 dozen an hour in four to five minute cycles. There is an 18-minute bake time, and every four minutes it’s four dozen out and four dozen in. Morena notes that some shops can do 3000 dozen an hour compared to their 35. “It’s what holds us back sometimes,” he says.

The oven at St-Viateur doesn’t even have a temperature gauge. The baker manning the oven loads the rolled doughs in with a long wooden paddle, and manipulates the cooking process from there by watching the oven. Bagels are boiled prior to bake in honey sweetened water.

“To truly master the method it takes a year,” he says. “In the old days, it was a three-person operation: a roller, baker and service. We’ve grown and at our main shop there are three people to serve and a roller and baker.” There is only one baker on the oven. The roller’s most important task is to roll out the air.

“There are no short cuts, trust me, I’ve looked,” he says. “It’s simple. You see the process.”

Adjustments are minimal in the form of water temperature in the weather. The bakery used 100 per cent cold water in the summer, but adds some warm water when the blustery Montreal winter comes to town.

He notes he is hearing a lot of interest in Montreal bagels right now, and says opening a bagel shop isn’t easy. St-Viateur has been “60 years in the making.”

Morena represents timeless tradition and an incredibly honed baking art at St-Viateur. Turning further eastward, in Halifax, Gerry Lonergan is trying to “bust the myth that only two cities can make a proper bagel.”

He doesn’t just mean replicating a Montreal or New York style bagel in a different city, because that’s been done. What Lonergan went after was creating an entirely new style, one he’s dubbed the East Coast style. He picked the aspects of New York and Montreal bagels that he liked, plus a dash of San Francisco influence to complete his hybrid. The resulting bagel is one he describes as looking like a Montreal bagel in appearance, but not being as dense. The bagel is not as fluffy as a New York bagel either, and he uses sourdough cultures (inspired by San Francisco).

“The flavour is a nice balance of acidity and sweetness. Different condiments draw out different alchemies.”

Lonergan is selling the bagels out of his East Coast Bakery, an open concept 1200 sq. foot facility he opened in May 2016. He offers bagels and braided challah bread to the storefront, while also supplying 11 restaurants plus stand vendors with challah buns. A sourdough bread line is in the works. He also delivers to synagogues.

Customers can see the process start to finish. Flour is mixed. He uses a higher gluten flour with a protein count of 13.2 per cent. After mixing, the dough has a short rest, and then is machine divided and shaped into rings. The dough is then hand moved/stretched to a honey sweetened water to boil for two to three minutes. Next, the dough is garnished with seeds or salt, whatever is called for in that batch. The bagels bake in a stone deck oven at 475 F and are typically done in 15 minutes. In total, Lonergan says it’s an 18-minute production rate. The process is pretty much on demand and leaves little or no waste.

For staffing, his business requires himself plus two, but on a busy day, plus four. East Coast Bakery is open seven days a week, and has no seating or coffee. The only accoutrements are cream cheese he sells out of a fridge for customer convenience, and he describes it as “essentially set up as a factory open to the public to buy from.” His operation is certified kosher pareve.

“I wanted that extra level of authenticity and level of standards to prove we really are doing this the right way.”

East Coast Bakery’s top sellers are the sesame and onion-all-in, although he notes some days he can’t keep the salt pretzel in stock. The onion bagel is internally referred to as the “sauvignon blanc” because it “creeps up on the palate, explodes with flavour and then leaves a clean finish.”

Lonergan, whose background is in computer programming with distribution/process improvement as a specialty, started making bagels at home six years ago. He made his sourdough by capturing local wild yeast with a flour and water mix on the countertop. He got creative, developed his hybrid and saw a niche for a business with the bet that he could automate it.

His bakery has received plenty of press, and the front counter is hopping. While Montreal remains prolific in its bagel making, a new hybrid is flourishing on the east coast.

But Lonergan isn’t the only one getting creative with bagels. Ontario-based ACE Bakery, a larger artisan bakery that supplies retailers and foodservice in Canada and the U.S., launched the baguette bagel in March. The innovation takes ACE’s well-loved baguette dough and marries it with the bagel shape. ACE Bakery presented its invention at the National Restaurant Show in Chicago and was honoured with a FABI award recognizing industry innovation. Brian Sisson, vice-president of operations at ACE, says they wanted to develop something totally new. Sisson and Marcus Mariathus, director of product development, hit the road and ate plenty of bagels in New York and Montreal.

“They were good bagels, traditional bagels,” Sisson says. “But we wanted something different.”

“For several years we have wanted to enter the breakfast category,” he says. “The baguette is loved by a lot of people in Canada and the U.S. so we wanted to innovate that formulation into a bagel shape…This was a way to get the baguette to the breakfast table.”

The team took about 10 months to get the baguette bagel how they wanted it. The challenge was trying to get that shape, but “with the profile of the baguette’s crispy crust,” Mariathus says. “It has very basic ingredients. Bagels have come a commodity market and we didn’t want to be in that that market. We wanted to give them something premium; an idea that will be appreciated.”

The simple ingredient list consists of unbleached wheat flour, water, salt, yeast and malted barley flour. The result is an airy baguette texture, where traditional bagels have a denser chew. The exterior is crispy. The dough is the exact same as ACE’s traditional baguette. And, it seems ACE might be on to something for baguette and bagel lovers.

The bagel comes in two varieties, plain and sesame seeds, with new flavour profiles in the works. The product is non-gmo, as is all ACE products that don’t contain dairy or eggs. The bagel is available to retail and foodservice.

“We are proud to bring something innovative to the market,” Mariathus says, adding that their gourmet burger buns boosted gourmet bun market, their baguettes have done well and “now bagels, we think that’s something that will probably take off too.”