This column is written by Dr. John Michaelides of the Guelph Food Technology Centre 519-821-1246, www.gftc.ca.

This column is written by Dr. John Michaelides of the Guelph Food Technology Centre 519-821-1246, www.gftc.ca .

Question: A new variant of wheat rust is threatening the wheat crops globally. What do we know about this disease and how will it affect the baking industry?

Answer: The baking industry along with the entire food industry is facing tremendous pressures due to the continuous increase of the cost of raw ingredients. It is widely accepted that these problems are due to many factors and they cannot be attributed to a single cause.

Demand for commodities for use as raw materials for biofuels and bioproducts has escalated and, coupled with the land displacement for growing specific crops, has dominated the increase in the cost of ingredients for the food supply. Other factors for such increases include weather effects such as drought, flats and other catastrophic events. In addition to these factors, there is a growing demand for processed foods and meat in the highly populated and changing developing countries such as China and India. This demand is exerting more pressure on the ingredient and commodity markets. 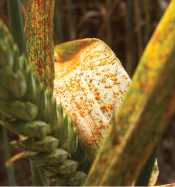 During the thousands of years of history of crop cultivation, major catastrophes were reported mainly attributed to bad weather, insect infestations, and microbial diseases.

Most of the progress in reducing the effects of these causes deals with the development of pesticides and breeding new varieties of crops that are resistant to such diseases.

Today we are facing a new challenge with one of these causes we had a fairly good control over in the past 60 to 100 years. Wheat stem rust has been known since biblical times as the “wheat plague.” This wheat disease is rearing its head again, threatening worldwide devastation of wheat crops.

Wheat rust is an infection of the wheat stalk by the fungus Puccinia gramminis, which produces many characteristically rust-red coloured pustules on the stem of the plant. Each of these pustules contain billions of spores that, when they become airborne, follow the wind patterns and are transported to great distances, infecting wheat fields thousands of miles away. The infected wheat plants eventually die.

The relationship between the barberry plant and the life cycle of the rust was elucidated a long time ago, and in the early 1900s, when the wheat rust epidemics devastated the crops in North America, the USDA initiated the barberry eradication program. This action did not completely eradicate the wheat rust but it did bring it under control.

The last major outbreak of stem rust in North America happened between 1950 and 1954. It was recorded to destroy more than 40 per cent of the spring wheat crops in some years during that period. Since then, extensive breeding of resistant varieties of wheat has occurred and the outbreaks of such infections have been completely eliminated, but the danger was always there. The genes of stem rust fungus and those of wheat have continuously evolved together and the relationship is very close. A minute change in the genetic material of either the fungus or the wheat determines whether the plant is susceptible or resistant to the disease. Wheat breeders have managed to stay ahead of the game and they have been successful until recently. In 1999, however, stem rust pustules were discovered on a resistant variety of wheat in a nursery in Uganda. This discovery of a new very virulent strain of stem rust named Ug99 is identified to overpower the resistance of 90 per cent of the known wheat varieties. It has also been spreading very rapidly. Specialists in 2006 predicted, based on wind models, that the spores of this devastating disease-causing fungus could spread from Uganda to east Africa, jumping the Red Sea and reaching the Arabian Peninsula. Indeed in 2007 it was confirmed that the disease has reached Yemen. Up to that point its existence was only observed in Uganda, Kenya and Ethiopia.

Scientists predict that it is only a matter of a short period of time before it reaches Pakistan and India. It is feared that the new Ug99 wheat stem rust could be of a great risk to world wheat production. Another virulent fungal wheat disease, yellow rust, devastated wheat crops in Afghanistan, Egypt, Iran, Iraq, Pakistan and Syria in the1980s, with estimated losses of more than $1 billion dollars US. This current outbreak of stem rust could be more serious. It is estimated that it will cause a loss of more than $3 billion US in Africa, Middle East and South Asia. If the disease is not controlled this could be the beginning of a worldwide crisis affecting the wheat supply. The disease could spread to Australia, Europe, and North America, putting more pressure onto an already suffering commodity. Indeed the world’s supply of wheat is at its lowest in 30 years and this additional problem will have a major impact on global food security. The spores follow wind patterns and cannot be controlled by boarders. The only solution is to replace most of the wheat in the world with varieties that are resistant to this race of stem rust. This will be very difficult since only about 10 per cent of the current wheat varieties are known to be resistant. Developing new varieties that are resistant will take years of breeding and testing. Their evaluation is normally being done in areas of the world where the infection is known to exist. For example, most of the new resistant variety development work for this disease is being carried out in Africa, where the danger of introducing the disease is not of importance, making the process even more difficult.

The threat of Ug99 stem rust is probably the most critical compared to all the other pressures the wheat crops are facing today. We can control the pressure on the crops from biofuel and bioproducts production or the demands from the developing markets in China and India. However, if this disease becomes (or perhaps I should say when) a global issue, then the consequences will be devastating.  Our hope is that new resistant varieties are developed in time before this fungus goes global with the new arrival of this strain.

As one can imagine, the effects of this wheat disease would be very devastating and would affect the global cereals and baking industry. It will be even more devastating to some underdeveloped countries where wheat is the major food crop.

Funding for this report was provided in part by Agriculture and Agri-Food Canada through the Agricultural Adaptation Council’s CanAdvance Program. For more information, or fee for service help with product or process development needs please contact the GFTC at 519-821-1246, by fax at 519-836-1281, by e-mail at gftc@gftc.ca .