A gathering of baking and pastry chef instructors in Western Canada. 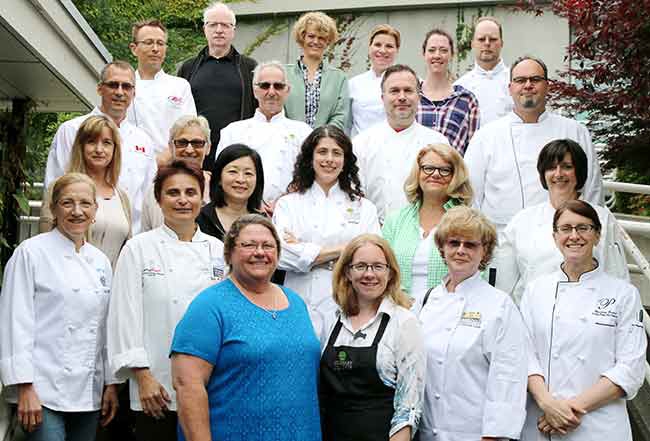 Following an inaugural meeting at the Southern Alberta Institute of Technology (SAIT) in Calgary in November 2015, a group of baking and pastry instructors from Western Canada felt the need to continue their discourse on teaching and learning in the trade. As a result, an invitation for a reunion was sent out to all colleges in the four Western Provinces and Washington State, and 23 delegates made their way to Vancouver Island on the weekend of June 24-26 for a learning/teaching event.

On Friday, June 24, the group was welcomed and given a tour of VIU and an overview of the culinary programs offered along with a visit to the Sturgeon Center and VIU’s Center for Innovation and Excellence in Learning. On the way to a tour of Vancouver Island’s lush Cowichan Valley, the group stopped by Hearthstone Artisan Bakery in Nanaimo, a business recently established by two graduates from VIU’s baking program, Hailey Mannynvali and Paul Aboud. The travels continued with a visit to a vineyard, a cheese maker and True Grain Bread in Cowichan (a bakery with a flour mill). Then the group enjoyed an informal soiree at Providence Farm, (a VIU Culinary Institute partner) specializing in Farm to Table fare.

It was clear the challenge for today’s bakery managers is that we have to throw conventional ‘in-house’ baker training out the window. Millennials have their own agendas and they don’t always jive with conventional guidance and orientation programs that have worked well previously. Millennials come with their own agendas and if we don’t respond on modern day terms the result will be frustration for both the employer and employee.

On Saturday and Sunday the group was treated to a varied program by attending delegates. On the teaching side, ideas and challenges around teaching ‘millennials,’ engaging with students in non-traditional situations and that catch-all, ‘good practice’ were presented by Rita Gower, a VIU baking and culinary instructor who has just earned her Master’s in Education.

Ken Harper (VIU) led a discussion on organizing Culinary Field Schools on Saturday afternoon. Harper has participated in field schools to Brussels and Paris and developed and led a field school to Belize, with another trip to Belize scheduled for May, 2017.

Saturday evening the group reconvened at Martin Barnett’s (VIU) residence with a wood-fired brick oven and enjoyed Neapolitan pizzas. Participants were extremely interested to share how their respective institutions delivered their varied programs.

On Sunday, Alan Dumonceaux (NAIT), manager of the Baking Team Canada, introduced the attendees to ‘speed laminating’ skills and other techniques including special effects with chocolate croissant dough.

The weekend was chock full of lively discussion, demonstrations and bonhomie. It was unique, because baking and pastry instructors very rarely get to network in a formally organized convention. At the wrap-up discussion it was unanimous that a similar event would be organized again at another venue.

Martin Barnett is instructor and chair of the Professional Baking Department for the Culinary Institute of Vancouver Island University.