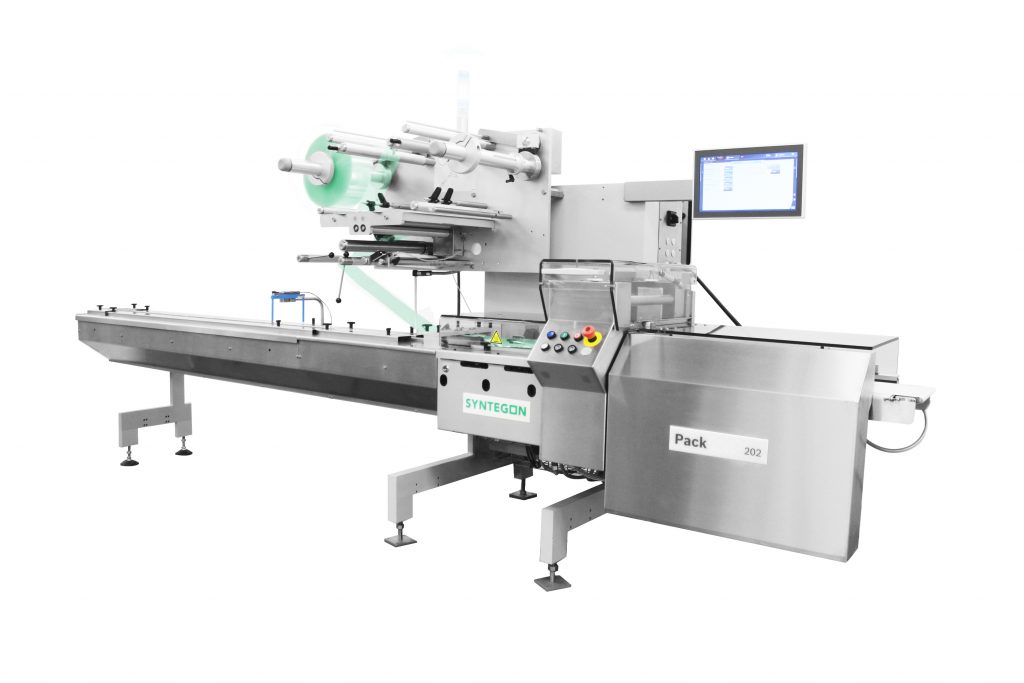 Syntegon Technology has launched the next generation of flow wrappers on the North American market ­– the Pack 202.

As the successor of the Pack 201, the machine is a fully automated horizontal flow wrapping machine for low to medium speeds. The flow wrapper is suitable for bars, bakery products, cookies and crackers, as well as non-food applications. With the Pack 202, manufacturers benefit from a number of technological advances that were first introduced on the new Pack 403 last year, including an easily removable discharge belt, upgrades to the cross-seal and fin seal units, and a highly intuitive, user-centered design.

“Our new flow wrapper for small to mid-sized manufacturers certainly packs a punch: We were able to integrate some of the features of our Pack 403 for medium to high speed applications into the new Pack 202. The machine is easy to operate, clean and maintain, which reduces downtime and maximizes overall equipment effectiveness,” Kelly Meer, product manager at Syntegon in a press release. The Pack 202 is designed to produce up to 300 packs per minute at a film speed of 50 meters. Supported pack styles include pillow, gusseted and easy-to-open packs.

Borrowed from the Pack 403: Technological upgrades for improved seal quality

Ideal for multi-product applications, the Pack 202 can wrap individual or grouped products including bakery goods, bars, fresh and frozen products, confectionery, snacks, medical products, prepared foods, household goods, and many other food and non-food items. The Pack 202 profits from a number of cross- and fin-seal improvements that were first introduced on the Pack 403 flow wrapping machine last year.

The finwheel modules have been synchronized and the Pack 202 now features an improved canting mechanism: At the turn of a knob, operators can tilt the fin modules and adjust them easily for tighter or looser packs. On the Pack 202 for the North American market, the Pack 403’s powered fin fold-over technology is now included as a standard feature. Not only does this technology enhance the appearance of each pack, it also facilitates maintenance and cleaning processes since the fold-over unit can be removed easily.

The cross-seal unit on the Pack 202 has also been improved significantly: The standard double-spring kit offers more consistent and stable seals, while the adjustment resolution has been doubled, thus enabling more precise and repeatable crimper adjustments.

User-friendliness and ease of operation are at the heart of the Pack 202’s design – just like the Pack 403. A number of features on the Pack 403 have been integrated into the Pack 202 to improve the user experience. Sequentially numbered film rollers facilitate film threading for repeatable, consistent changeovers and minimize downtime caused by “trial-and-error” adjustments. The flow wrapper also comprises an optional automatic film splicer with laser-etched instructions on the deckplate to secure fast and smooth film changes without having to stop the machine.

As a new option for North American customers, the Pack 202 can be equipped with a one-meter-long reject belt. Its short length offers brand owners a much smaller machine footprint compared to the previous Pack 201 machine. The upper section of the reject belt is easy to remove for quick belt changes and cleaning processes. The detection function on the short discharge belt rejects faulty packages and automatically ejects them using compressed air. For larger and heavier products, a two-meter-long discharge module with reject plow is available as an option.

Syntegon has intensified its efforts to develop intelligent and sustainable technologies. The packaging experts work with material suppliers and brand owners throughout the supply chain to test and adjust the machine run-ability of alternative packaging materials.