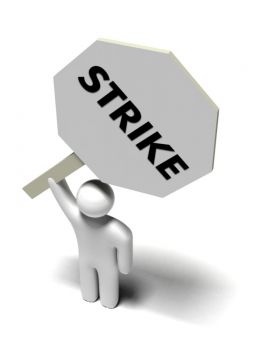 June 22, 2009, TORONTO – Tourism, foodservice and hospitality businesses were among those sweating the days ahead Monday as municipal employees formed picket lines across the city on the first day of what some fear could be a long, stinky, summertime strike.

About 24, 000 city workers, members of the Canadian Union of Public Employees, walked off the job Monday after last-ditch efforts to avert a work stoppage came to naught.

Two CUPE locals, representing 6,200 outside workers and 18,000 inside workers, went on strike just after midnight.

The last time city workers went on strike was in 2002. For two weeks, mounds of rotting garbage littered city streets smack dab in the muggy days of summer.

Mariko Takeuchi, 27, wasn’t in the city for the first strike, but she remembers the horror stories from friends and family.

“I understand it was disgusting with the heat, with the smell, the fact that you couldn’t dispose of your garbage, you couldn’t walk the street without it affecting you,” Takeuchi said.

“I think from a convenience and air quality standpoint, that’s my biggest concern now.”

Others said they fear for the summer tourist season if the strike stretches beyond a few days.

Engel Garcia, 39, said he can stockpile bags of litter in his backyard for a week or two, but with summer festivals and parades – including Sunday’s Gay Pride parade – he fears tourists will avoid a dirty destination like Toronto.

Garcia had little sympathy for the workers going on strike, saying tough economic times have touched almost everyone in the country, not just city workers.

“With the whole economy going down everyone’s asking for more money,” he said. “Everyone’s feeling it, so it’s not just city workers feeling it.”

While only a few lone garbage bags sat by curbs on Monday, residents of the city were quick to feel the immediate impact of the strike.

City garbage bins were posted with signs saying out of service and families wanting to use the ferry service to soak up the sun at Toronto Islands were turned away.

Igor Khortov said he was “shocked” to hear the service was cancelled, having promised his son a belated Father’s Day celebration on the beach.

“Oh my God, now what do I do?” said an incredulous Mark Phillips when he realized ferry service to the Toronto Islands had been suspended.

A spokesman for Toronto’s mayor said David Miller is being kept apprised of bargaining, but isn’t taking an active role.

Along with issues of job security, scheduling and seniority rights, employees want to keep 18 sick days a year, which can be banked and cashed out at retirement.

But the city wants to create short-term disability programs instead.