How sugar is cultivated, processed and used by the body. 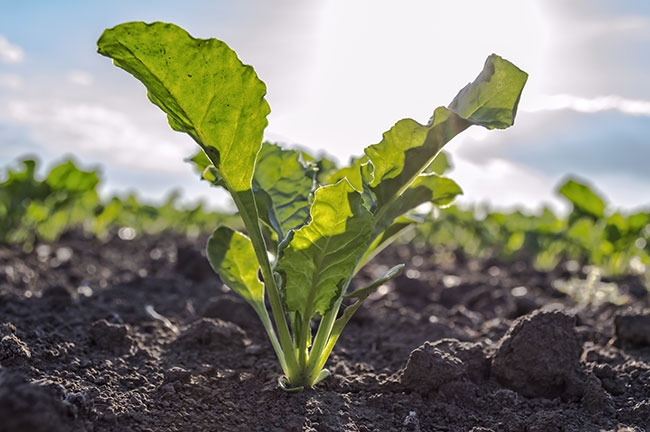 Sugar beets, a common source of white sugar, are grown in Canada. Sugar from sugar cane is cultivated in warmer climates. Photo: Fotolia

New Canadian labelling laws that affect the way sugar is measured may change the way customers and manufacturers view the bakery shelf. But, what is sugar? Where do consumers’ perceptions go wrong? And why is this ingredient so prized in baked goods and also so indispensable?

On packaged goods, the original Nutrition Facts Table represented serving sizes in metric weight, while showing the weight of sugar in each serving. The new Nutrition Facts Table shows the serving sizes in familiar household measurements, such as cups and tablespoons, as well as the metric weight.  It also replaces the weight of sugar per serving and instead shows the percentage value of sugar per serving based on the recommended daily amount.  But, what is this amount and how has it been determined?

“It’s 100 grams a day,” say Dr. Alfred Aziz, chief for the bureau of nutritional sciences for Health Canada in Ottawa. “This is a daily level of intake from a healthy diet eating foods like fruits, vegetables and dairy as recommended by the Canada’s Food Guide.”

“All green plants, such as fruits and vegetables, produce sugar through photosynthesis, a natural process that turns sunlight into energy, “ says Chiara DiAngelo, manager of nutrition communications and a registered dietitian, who works for the Canadian Sugar Institute in Toronto. “The granulated sugar in your sugar bowl is the same sucrose found naturally in sugar cane, sugar beets, apples, carrots, and other fruits and vegetables. Sugar is obtained from sugar cane and sugar beets for commercial use due to their high sucrose content.”

To further understand the amount of added sugar in packaged foods, descriptive text will appear at the bottom of the label. “There is a foot note with the amount on added sugar — five per cent is a little and 15 per cent or more is a lot,” says Aziz. He says this will help consumers to quickly decide what to purchase.

“All ingredients that are sugar will be grouped together in brackets after the words sugar to show the consumers how much of the food ingredients contain sugar,” says Aziz. “The hope is for improved information. We are clearly saying to limit sugar.”

So, which form of sugar is the healthiest?  Abby Langer, a Toronto-based registered dietitian has spent almost twenty years debunking food theories. She cautions not to believe everything you read. “No sweetener is dramatically healthier than another. Just because it is marketed to be more natural or organic doesn’t make it better for you,” she states. “Sugar is sugar.”

DiAngelo adds: “Whether it comes from fruit, vegetables, honey, maple syrup, or table sugar, each gram of sucrose is broken down and used in the same way, as a source of energy for the body.”

Sugar is a one hundred per cent naturally occurring compound. Why and how is it processed?

Sugar beets, a common source of white sugar, are grown in Canada. Sugar from sugar cane is cultivated in warmer climates.

“Granulated sugar from sugar cane or sugar beet is naturally white. No bleaching agent is added at any time during the purification process. Instead, the process of refining removes impurities so that sugar consumed in Canada meets government health and safety regulations of purity of at least 99.8 per cent pure sucrose,” says DiAngelo.

Sugar cane is harvested at plantations in tropical regions such as Brazil, Cuba, India, Mexico, and Pakistan and in the U.S. states of Florida, Louisiana, Hawaii and Texas.  It is transported to sugar mills, where the process of purification begins. Sugar cane stocks are crushed to extract the juice. It is clarified, concentrated and crystallized. Molasses is also produced during this stage.  The final result of processing is golden raw sugar.  This is inedible sugar that should not be confused with the kind sold in supermarkets.

From this point the golden raw sugar is shipped to the sugar refinery in Canada to remove leftover molasses, and concentrated by boiling and filtering to remove further impurities. Crystals are formed. Then it spun, washed, sifted, dried and packaged.

Sugar beets have a growing season of about five months. Each beet weighs approximately 900 grams. The majority of Canadian grown sugar beets come from Alberta, but they are also grown in Ukraine, Russia, Germany, France and parts of the U.S. including California, Colorado, Michigan, Oregon, and Washington.

Once beets reach maturity they are shipped to a sugar beet factory. There, the vegetables are cut into slices and soaked to release the natural sugars. The water is clarified, filtered and evaporated to produce syrup. The syrup is boiled, spun and washed. Once in its crystal form, it is dried, sifted and packaged.

Incredibly, though grown in diverse climates, sugar from both sugar cane and sugar beets tastes identical.  Granulated sugar is the most common type of sugar available. It can be coarse, medium, fine, extra fine, ultra fine and superfine.  Icing sugar is powdered granulated sugar, also known as confectioners’ sugar. It contains three per cent cornstarch to help it avoid lumping.

Brown sugar is formed by crystallizing the golden liquid form or by mixing molasses with pure white crystals.  The amount of molasses determines the properties. Liquid sugar and invert sugar are primarily used in manufacturing.

In baked goods, sugar is valued for much more than just its sweet taste. There are many reasons why sugar is essential in baking. For cakes and cookies that use the creaming method, sugar becomes trapped in the fat, creating pockets of air for leavening agents to expand within.

Sugar becomes a foaming agent when mixed with eggs. Think Genoise and sponge type cakes that have approximately three times the amount of eggs than butter cakes.  To maintain a moist crumb, sponge, chiffon and angel food cakes require more sugar. Cakes such as a Genoise require simple syrup after baking.

Once in the oven, sugar fights with flour in a battle to absorb the water, thereby delaying the cake set time, allowing the cake to expend to perfection.

In the initial bread baking process, sugar mixed with yeast and water helps to quickly accelerate the forming of carbon dioxide, which appears in the form of bubbles.  Once the flour is added and mixed, sugar absorbs the water keeping the product moist. Sugar helps to weaken the gluten structure while making it more elastic and enabling the structure to expand, thereby trapping in the carbon dioxide.  Essentially, it helps generate the leavening process.

During baking, sugar begins to caramelize forming the crust colour so desired in all baked goods and provides the keeping qualities that extends shelf life. Sugar also provides the beautiful garnishes, from flavourful icings to intricate sugar work.

“High intensity sweeteners can be used to replace sugar’s sweetness, however other functions such as providing bulk, colour, texture and preservation are typically achieved through the addition of gums, thickeners, starches, or additives. Because of this, there may not be a reduction in carbohydrate content or calories in the reformulated product,” says DiAngelo.

Perhaps new labelling on packaged goods will help consumers better understand what comprises sugar. Diet conscious consumer may choose to save their calories for the special treat they crave. One thing is for certain, the bakery section will always have a welcome home in any grocery store.

Karen Barr writes about art, culture and cuisine for Canadian magazines. She is a Red Seal baker and pastry chef.

Related
Sugar, Sugar!: A look at the functional role of sugar in baking.
Baking sugar might reduce its calories
Baking Without Sugar
Sucrose enhancer could help slash sugar: Senomyx
Tags