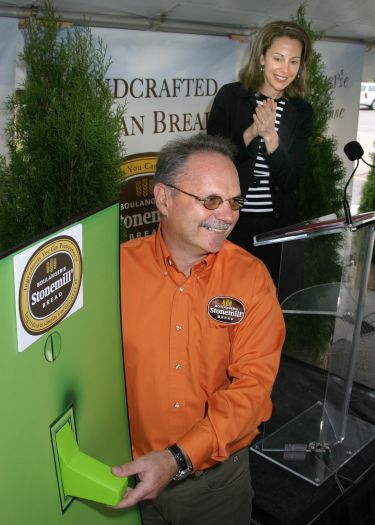 June 9, 2008, Toronto – Toronto’s Stonemill Bakehouse celebrated its switch to green power last week with owner and president Gottfried Boehringer flipping a symbolic green switch in a ceremony held at the bakery. Stonemill is the first Toronto bakery to make the switch to 100 per cent renewable energy.

"Our commitment to developing healthy and delicious breads made with ingredients you can actually pronounce includes our environmental responsibility in the baking of these breads,” says Boehringer.

The bakery, located in Scarborough, will source 100 per cent green electricity generated by low-impact hydroelectric and wind energy, reducing its CO2 emissions footprint by almost 1,000 tonnes annually. Stonemill produces 40,000 loaves daily and also has a retail location at the St. Lawrence Market.

The company’s move to go green began with an environmental assessment study Stonemill commissioned last year to investigate the changes it could make. The result was “eight steps on the roadmap to sustainability,” says Boehringer.

Those steps include everything from reducing energy usage in the plant by switching over to environmentally-friendly light bulbs, removing unnecessary lighting, recycling and composting bins placed around the plant, reducing wastewater, switching to organic and locally-source ingredients (where possible) to reduce the level of pesticide being used by the farming community, and reducing the amount of garbage generated by the business in general.

Boehringer says it was surprising just how easy it was to make all of the changes.
“The eyeopener is how easy it can be to go green,” he says. "I invite the rest of the baking industry to follow suit. Collectively we can make a substantial and positive environmental impact by reducing environmental waste and conserving non-renewable resources."