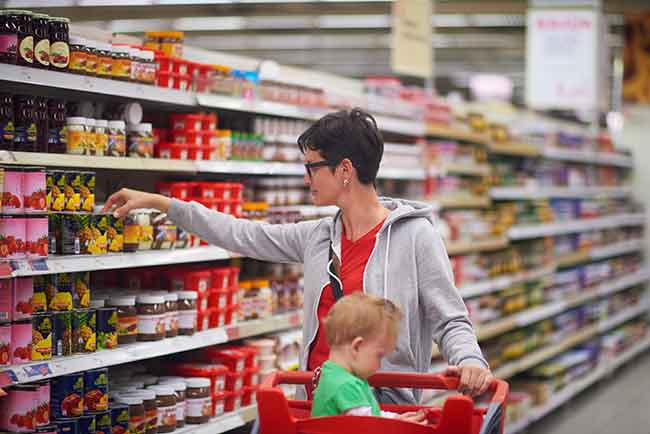 Sixty-one per cent of mothers and 67 per cent of fathers thought free-from products were healthier to eat and drink. PHOTO CREDIT: Fotolia

Mintel, a global market research firm, released two reports this fall that shed light on what Canadian and American consumers think about free-from labels on their food. Let’s take a look at what the survey says.

One of the biggest challenges identified by Mintel with Canadian consumers lies in their stated perception that labeling “free-from” is a way to charge more. Sixty-five per cent of those surveyed thought this was the case. Forty-six per cent viewed free-from trends such as gluten to be a passing fad. The vast majority of respondents, at 68 per cent, believed themselves to be well-educated on what is healthy for them. Mintel’s executive summary notes that the research suggests that consumers are more likely to buy claims that are quite established, such as trans-fat free.

Based on a study of 1,611 adult Internet users who purchase free-from products, the ingredients in the food was the No. 1 reason for purchase aside from cost, with 75 per cent citing it so. Further reasons for purchase in descending order were: freshness (73 per cent), flavour (65 per cent), nutritional content/labeling (62 per cent), locale (34 per cent), brand (33 per cent), convenience (33 per cent), and having coupons (26 per cent). Organic and free-from claims both came in at 22 per cent. Fortified (omega-3 added, or otherwise) was checked by 17 per cent, promotion on packaging by 13 per cent, food/beverage is in bulk format by 11 per cent and other was chosen by five per cent.

Concerning which claims Canadians are buying into, Mintel surveyed 2,000 adult internet users with the question of which claim, if at all, they primarily purchase the products for when it comes to food and drinks consumed at home.

Mintel’s executive summary states that free-from claims are more likely to be successful if they are part of the story of your brand, rather than an add-on without context of the overall product messaging. Six in 10 respondents believed that free-from foods are healthier for them, and 52 per cent agreed that these products help them solve specific health problems (such as salt-free and heart conditions).

Canadian parents
One opportunity for manufacturers indicated by Mintel can be found with Canadian parents, who have stronger positive views on free-from claims, in particular the “baby boomlet” (millenials having children). There is forecasted growth in Canada in the number of kids under 14 through 2019.

Sixty-one per cent of mothers and 67 per cent of fathers thought free-from products were healthier to consume. Fifty-four per cent of moms and 64 per cent of dads are keener on products that are fortified with extra nutrition versus ones that exclude unhealthy things.

Millenials versus boomers
Demographics make a difference when it comes to the purchase of free-from products. By Mintel’s definition, boomers are the over 55 crowd and millenials are 18-34.

Millenials are more apt to say they have purchased foods free from hormones, GMOs, gluten, lactose, or nuts than boomers are, and they are more accepting of newer claims. Meanwhile, boomers lean towards free-from claims that have a direct correlation to a health benefit. They are less likely to agree it is worth paying more for fortified foods, but these products do grab their attention.

In a survey of 1,611 Internet users, the following questions produced these demographically relevant results:

Confusion around GMO-free
When it comes to the hotly discussed subject of GMOs, 36 per cent of Canadians surveyed claim to be purchasing non-GMO goods.

Mintel’s executive summary states: “While nearly seven in 10 (67 per cent) Canadians see themselves as being well informed on what ingredients are good and not good for them, qualitative and secondary research suggests that views held over genetically engineered foods are based on perception with little grounding in fact.”

With the vast majority of the scientific community holding the view that GM food poses no health risk, Mintel suggests that the labeling of this particular free-from claim will create and entrench the perception that GMOs are bad for you. The report describes consumer awareness on this issue as superficial from a health perspective. Feedback from consumers indicates that worries about GMOs are also tied to sustainability and the environment. Pesticides also appear to be a consideration when consumers are looking to purchase GMO-free.

Opportunities in Canada
Mintel’s “Make it Mine” trend sees consumers searching for more and more customized solutions. Manufacturers could create an app that assists customers with dietary decisions that are personal to them.

There is a particular opportunity to cater to parents with a clean label.

It helps to connect your free-from claim to a specific health concern in the consumer’s mind.

South of the border
In May, Mintel produced the report US Free-From Food Trends. The following is based on the executive summary of this study.

Mintel identified GMOs as a hot button issue in the U.S., where they are gaining regulatory approval, but not necessarily consumer confidence.

In the U.S., interest in GMO-free foods is bigger than foods free-from soy, nuts/peanuts and eggs, particularly with Hispanic customers.

In ascending order of age, respondents carried the following views:

When it comes to controversial ingredients, consumers were mostly likely to expect to find them in frozen meals, with between 47 and 59 per cent of those 18 to 65 and older thinking so.  Forty-one to 53 per cent thought they would likely be in snacks like chips, and 16 to 27 per cent are suspicious of cereals, whether hot or cold.

Opportunities in the U.S. market
Health issues seem to be top of mind for people who buy free-from foods. There is still a big interest in fat-free as obesity is an ongoing concern. Sodium/salt-free is also a worry.

There are specific claims consumers surveyed would like to see more of. By generation in order of millenials, generation-x, boomers and swing, they are:

Overall, American consumers view foods with a free from claim to be healthier and less processed, while equating GMO or artificial with being unhealthy.

Free-from claims are piquing interest on both sides of the border, with trans-fat or fat-free still top of mind. There are challenges in convincing consumers to pay more, but a good brand story goes a long way to building trust. And importantly, it seems opportunities abound.