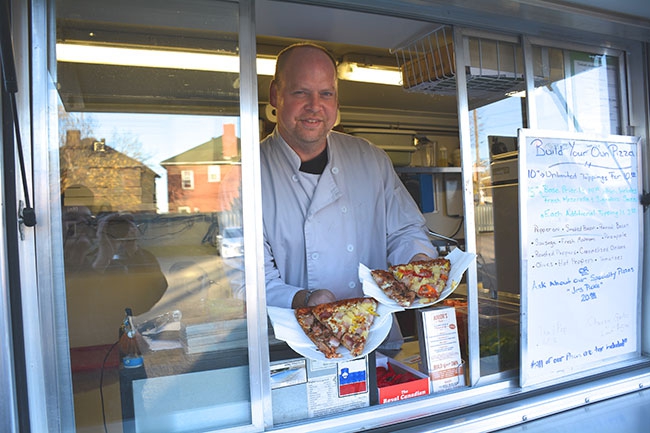 As a-ha moments go, the one that conceived Junior’s Handmade Sourdough Pizza in Bowmanville, Ont., was a quiet but significant one. It came when, after years of working in the restaurant industry, Jade Chaput and husband Victor Hanc Jr. planned to get into the pizza business.

“We weren’t thinking of sourdough. Vic and I went into a bakery to pick up buns,” Jade says. “The sign on the door listed sourdough as an option. We looked at each other and we just knew that we were going to do sourdough pizza.”

Sourdough is a departure for Victor Hanc Jr. – the business’s namesake and part of the Hanc’s family of restaurant businesses, which are institutions in the suburban town about an hour’s drive east of Toronto. He grew up working for his parents, Barbara and Victor Hanc Sr., who have owned and operated Hanc’s Fries since 1971and until recently ran Hanc’s Restaurant. Jade, who has worked in food service since she was 13, now manages the restaurant under new owners.

Meanwhile, the enterprising couple, keen to make their own mark on the restaurant landscape, opened their own food truck next door to Hanc’s Fries, which is still operated by Victor Sr. and Barbara.

Victor Jr. and Jade confirmed their original sourdough inspiration by doing their homework. Online research uncovered hotspots in San Francisco, Arizona and the United Kingdom and although they found a number of pizzerias that made sourdough crusts, it seemed clear the trend had not migrated to Canada.

After deciding sourdough was their niche, they set about making the business a reality. They hired Ottawa’s French Fry Trailers to build them a 16-foot-long food trailer. While it was being built over six months, they purchased equipment, shopped around for ingredients and perfected their recipes and methods.

“It was a huge learning curve. We phoned Vic’s Aunt Mary in Hamilton, talked with bakers, watched YouTube videos,” she says. There was a lot of testing among family and friends.

In July 2014, Junior’s put out its shingle. The pizzeria, which has the potential to be mobile but is parked near King and Liberty streets, offers both pickup and delivery. “People treat us as a normal pizzeria,” Jade says, adding that 40 per cent of customers order by phone.

WHAT IS IT ABOUT SOURDOUGH?
The response was encouraging. “The sourdough makes all the difference in the world,” Jade says. “It’s chewy. It’s tangy.” They hand-shape their sourdough from a mother dough. It is then “blast-cooked” in their oven, a process they say locks in the sourdough’s natural aroma and produces a soft, crispy, chewy, mildly sour and smoky crust.

One challenge has been managing the fluctuating temperature inside a food truck. “It was a challenge working out that science with the water,” she adds. In the end, they settled on using about a cup less water to counteract the humidity during warm months.

HEALTH BENEFITS
Jade says they learned of the health benefits of sourdough after falling in love with its taste when a friend sent them a link to a Harvard study on its benefits.

“Basically, using sourdough eliminates less than 100 but more than 99 per cent of the gluten,” she says. “The fermentation process breaks down the sugars. There is not a lot of sugar in it to begin with: most of the sugar on our pizzas comes from the vegetables.”

Some of their diabetic customers have posted their favourable blood sugar numbers on social media after eating Junior’s pizzas versus other chain store pizzas, she says. A few of their regular customers who have celiac disease have asked to buy pizza dough to take home. “We will do that,” she says cheerfully. “Whether on a pizza or in a bag, it’s a compliment.”

One very special moment came when a woman was brought to tears because she was able to enjoy pizza for the first time.

While acknowledging it’s great to hear positive stories from customers, Jade says she and Victor Jr. see their role as introducing customers to sourdough rather than promoting its benefits. “We tell people to do their own research,” she says.

SENSE OF COMMUNITY
Everyone has specific roles in the business. Victor Jr. makes the pizza and prepares the ingredients. Jade takes care of purchasing. Their three in-store employees take orders, bring pizzas out of the oven and handle cash. A fourth person focuses on delivery.

The staff clearly have fun and their nicknames, posted on their Facebook page, say it all: Sean “Ladies Man” Adams, Stu “The Beard” Strickland, Sarah “The Texter” Potvin and Victor M Hanc Esquire.

Their positive attitudes help them face two big challenges. The first is getting people to try their pizza. “It’s expensive and new,” she says frankly. Customers can buy Junior’s Picks for $20, tax included, or a build their own pizza for $8 (10-inch) or $14 (16-inch).

Their solution lies in making a unique pizza using almost exclusively local ingredients and tapping into a market that has disposable income.

Buying “pretty much everything except pineapple and pizza boxes” from local farmers and suppliers helps cut down on transportation costs. They are limited to using what’s available and often required to use the fresh ingredients that same day. Sometimes it would be more cost effective to buy somewhere else, Jade says, but “it all evens out in the end” with a sort of barter system emerging.

“It’s important to us to support our community. We’re looking for that support too,” she says. “Shop small and not at the mall” is a credo they encourage customers to adopt.

Their customers range in age from 25 to 65 years and tend to be families with children or grandchildren, many of whom are middle-income working class people who can afford a and appreciate a high-quality treat.

The second hurdle is competing with well-established franchises, which tend to have much bigger advertising budgets.

Because the team at Junior’s doesn’t have a budget for mailing out flyers, they compete by being creative. Interacting with followers on Facebook and reaching out to their community are important elements of the strategy. “We really do have the most amazing customers. They advertise for us,” she says.

Examples of their own creativity abound. One day they bought lunch for emergency room staff at nearby Lakeridge Health hospital. They asked how many staff members were on duty, found out what allergies they had and provided them with a meal and a lasting sense of goodwill.

Another example hearkens back to the pizzeria’s opening. Operating on a thinly stretched budget, they couldn’t afford printed boxes, Jade says. To get around this, they used markers to write playful personal notes on the boxes. The practice was such a hit that they have continued the tradition.

“People love it!” she says. “They look at the boxes before they get to their car to see what we wrote on them. That’s really how friendships start.”

The friendships extend to getting involved in their town by helping raise money for local sports, including hockey and figure skating, and by regularly giving away Leafs tickets, Blue Jays tickets and Mother’s Day gift baskets. “Everything we do has a personal touch,” Jade says.

That feeling of community and love of what they do seems to have rubbed off on son Cameron, 11, and daughter Maddy, 7, who like to pitch in. “They hold contests to see who can assemble pizza boxes the fastest. Cameron’s friends are eager to help deliver flyers,” Jade says. “Cameron once asked me, ‘When can I do this full time?’ ”

While they contemplate the aspirations of the third generation, the couple have a few plans of their own. “We’d like to buy a standalone store one day and use the truck for special events only. That’s the plan. The opportunity to franchise: that’s the dream.”

What goes with sourdough?
Which toppings best complement sourdough? On this point, the Junior’s Handmade Sourdough Pizza partners differ. Jade likes roasted vegetables and sauce. “You don’t even need cheese,” she says. Victor likes the texture and complementary flavour of peameal.

They had an online contest asking for new topping ideas. Anchovies came up as a popular request that Jade, though not a huge fan of the fish, agrees is surprisingly good.