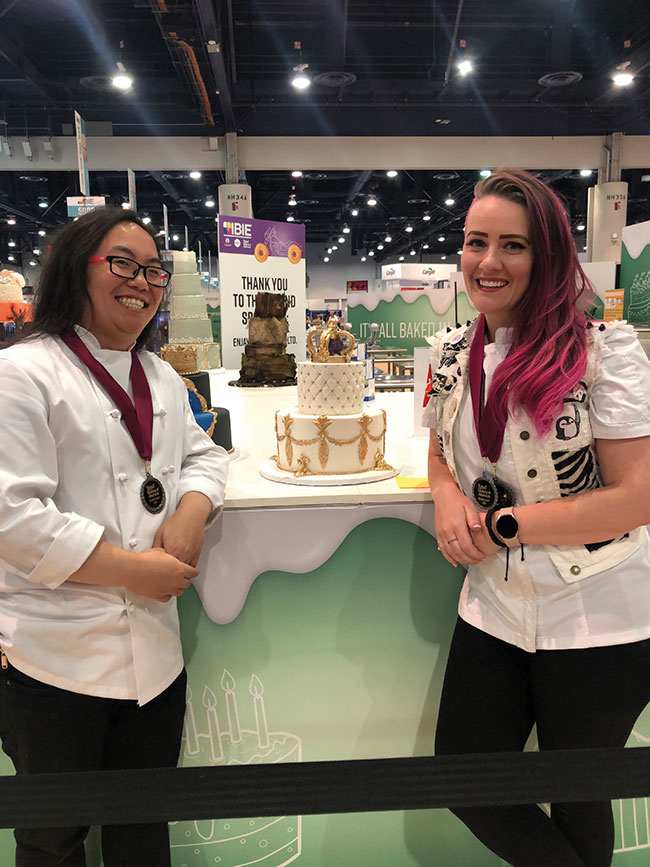 IBIE served as a smorgasbord for baking businesses where there was plenty of substantial information to be consumed and exciting extra features to sweeten the experience. As with all buffets, there is only so much time to gobble up information, inspiration and opportunities. Here is a quick first taste with a Canadian flavour.

On Sept. 17-21, the International Baking Industry Exposition gathered members of the baking industry together at the Las Vegas Convention Center for five days of learning, connecting and celebrating an industry like no other. 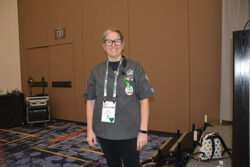 Award-winning cake artist Jean Schapowal, owner of Cakes with Character, shared many tips and ideas for restructuring your cake business in challenging times. During the pandemic, Schapowal supplied cupcakes for drive-by birthday parties using individual packaging, worked with other complementary businesses in her Long Island, N.Y., community such as packaging suppliers and larger bakeries with more ordering power, and donated cakes to both keep herself busy and benefit others. Every one of those donations brought her repeat business, Schapowal said in her informative talk.

Justine Martin of Guilty Pleasures Bakeshop in Sudbury, Ont., gave an energizing presentation on how to set up your baking business to work smarter, not harder. This strategy includes delegating and contracting out work to free up time for Martin to travel, compete, promote her brand and do long-term planning to diversify and make the business more resilient. 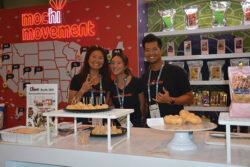 Donuts with Dawn assembled an enthusiastic women’s networking session, taking a photo of approximately 200 women involved who are leaders in the baking business. Carrie Jones-Barber, CEO of Dawn Foods; Cordia Harrington, founder and CEO of Crown Bakeries and chair of the ABA; and Brittny Stephenson Ohr, director of product management for Sugar Foods Corporation and board chairman of the American Society of Baking, talked about their roads to leadership, Harrington reminding the audience that women’s equality in the workplace is often cited as the top current driving force in the workplace. Other entrepreneurs were invited to take the mic, among them Pei Wu, owner and founder of Mochi Foods who announced the young company’s partnership with Dawn on its gluten-free mini-doughnuts featuring rice flour.

Canadians made their presence known at the show. Cory Jong of Hey Cake This! in Vancouver, and Emerlie Ann Miller of My Sugar Rush in Salt Lake City, Utah, won second place in two categories of the Retail Bakers of America’s Pillsbury Bakers Plus Grand Champion Creative Decorating Competition. The partners worked diligently in front of a riveted audience to make four cakes – wedding, tiered buttercream, sculpted hyper-realistic and tiered fondant – in two days on various themes. Their “Four Seasons” buttercream-covered cake was designed to be turned and viewed from four angles depicting spring, summer, fall and winter. Their fondant-covered depicted England’s new King through a crown mounted on a cushion that featured very realistic quilting achieved in part by using plastic wrap to simulate the puckered quilting, Miller explained. Jong said, “I am proud of what we accomplished at this competition, and I learned so much during the whole experience with my teammate, Emerlie! It was tough, insane, and gruelling . . . and I would do it again in a heartbeat!”

In the education wing, Matthew Duffy, professor at Centennial College in Toronto led a beginner’s class on making sourdough bread. Rye sourdough is a great way to start making sourdoughs because it uses a soft grain flour, Duffy said, as it requires less precision and is more forgiving than some other breads. He also recommended using scalded flour for about 10-14 per cent of the overall formula.

At the Retail Bakers of America stages, Jenna Hutchinson and Ashley Kowasan of Jenna Rae Cakes in Winnipeg demonstrated several techniques using their line of lustre dust. They created a fabric-like material by painting the dry dust on a thin sheet of glycerin using a fluffy makeup brush. 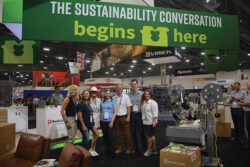 Kwik Lok displayed its sustainable enclosures, which include cardboard and printed using edible ink, and system of applying them. The company designs systems for bakeries based on what they are looking for: recyclability, reusability or compostability.

Puratos’ Artisan Marketplace was the setting for demonstrations on such topics as Nordic baking using sprouted grains and the company’s Sourdough Library. Chief executive officer Pierre Tossut shared with us a few current and future trends he is seeing. Consumers are reading labels and there are opportunities to enrich grains and improve gut health, Tossut said. He sees sustainability as an abiding priority. “Consumers are interested in where ingredients come from.”

Tossut highlighted demand for locally sourced ingredients and plant-based products, noting that all consumers, not just those following strict diets, are interested in and can benefit from plant-based foods.

Sourdough continues as a strong trend, Tossut said. As one of the most talked about topics online, the tradition has prompted  a steep rise in interest and awareness of baking skills.

Among new products at the show were Richardson’s golden croissant Danish roll-in margarine and Cremin Vegan ready-to-ship icing, demonstrated by product development manager Joel Lamoureux. Still on the icing front, Cargill’s Palmagility easily spreadable icings were developed to solve the problems of brittleness and greasiness and stickiness. ECD Bakewatch brought its Cake-ometer and Bread-ometer, which use innovative sensors to give bakers data on their products that they can access on a computer and choose the lowest of several temperatures to help create a consistent bake.

Canadian company GPI educated bakers about their chickpea-based dry mix blend of food ingredients and additives for plant-based egg products, which serves as a thickener, stabilizer and egg alternative for baking applications. 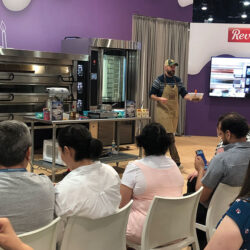 Coinneach MacLeod, known on TikTok as the Hebridean Baker, delighted bakers with cheeky stories while sharing tips for baking his mincemeat cookies using spiced rum or brandy and leftover dried fruits such as currants and sultanas.

On the marketing side, The Knock Shoppe showed off its illuminated cake display system and DGI demonstrated its Sweet Box inkjet printer for food applications, designed to make your products memorable and which takes about one minute to print a 40 cm by 40 cm image plate. The inventors of B.C.’s Ta-Daa Box demonstrated for bakers an exciting way to reveal their baked creations with the pull of a ribbon (see more on the New Products page).

The labour crunch has put automation on the minds of many a bakery big and small and there was no shortage of options at IBIE. B.C.’s AES Packaging Solutions displayed its Sapphire Flow Wrapper for horizontal flow wrapping, which features stainless steel construction and a cantilevered design for quick belt removal and is designed to reduce unplanned down time. Capway Automation’s DEFP Jet Pulse Filter system was developed for vacuum operations. It is designed to to remove extra-fine particulate, or flour dust, which then drops down into the hopper below. Apex Motion Control’s Baker-Bots turned a lot of heads. Dressed in human-style uniforms, the bots were busy stamping out cookies and doing other labour-intensive tasks. The bots earned the company a Best in Baking award in the automation and robotics category.

Watch bakersjournal.com and our social channels for more tips and trends from the show, including our Facebook photo gallery highlighting Canadians at IBIE!