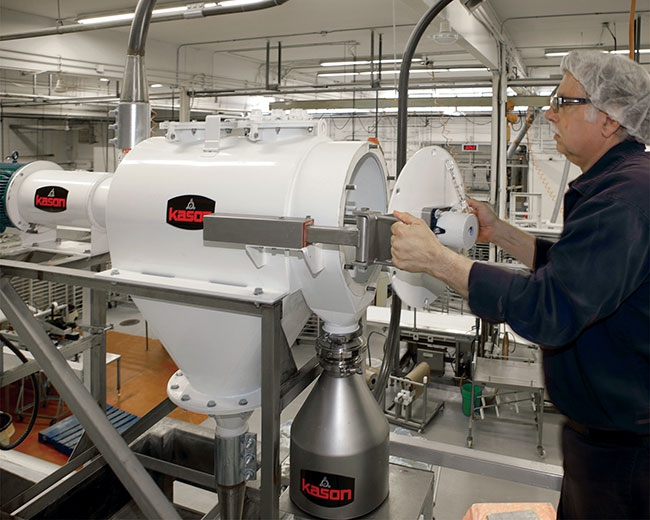 Gourmet Baker is one of Canada’s leading producers of baked desserts, and in 2011 it received a principal certificate for food safety from the British Retail Consortium. Less than 10 per cent of Gourmet Baker’s output is sold under its name. The balance is purchased frozen and unbaked by wholesalers, supermarkets and restaurants throughout North America.

Of Gourmet Baker’s three plants, its Laurel plant in Burnaby, B.C., produces many flavours of strudel, Danish pastries, puff pastries, croissants and cinnamon rolls using about 80,000 pounds of flour per week. A critical step is sifting of the flour to remove unwanted material, accomplished using a recently purchased sifter for strudel production, and an older one for multiple products.

The older screener was originally designed to sift sugar and did not work well for flour,” says Chris Helgason, maintenance manager for Gourmet Baker. “When we replaced the old screen basket with a 30-mesh screen, the machine couldn’t handle it and kept breaking down.”

The company replaced the screener with a Kason Centri-Sifter Pneumati-Sifter centrifugal screener, the same machine dedicated to its strudel line.

Moving flour from silo to mixer
Flour is stored in two 70,000-pound silos equipped with rotary airlocks feeding a pneumatic conveying system that delivers material to the sifter.

The flour enters a vertical inlet at the feed end of the centrifugal sifter, a horizontal, cylindrical machine that houses a 30-mesh (516 micron) stainless steel cylindrical screen mounted on a central shaft that is fitted with helical paddles. A 3-hp motor rotates the paddles, which accelerate the speed at which on-size flour passes through apertures in the screen and drops into the pneumatic line below. Oversize debris is ejected through the back end of the cylinder into a sealed quick-release receptacle. Each sifter processes about 75 pounds of flour per minute.

A pneumatically actuated diverter valve sends sifted flour to a hopper that feeds a triple-action dough mixer (for the puff pastry line) or, in the case of the original sifter, to one of three roll-bar horizontal mixers.

Each mixer’s hopper is set on load cells, allowing a PLC to stop the flow of material to the hopper once the target weight is reached. The desired amount of water is then metered into the mixer, while yeast and other ingredients are added by hand.

Transforming dough into frozen goods
A typical batch weighs 440¬880 pounds, Helgason says. Once thoroughly mixed, it is dropped onto a wheeled table and moved to the appropriate production line. There, the dough is manually cut into chunks and fed by a conveyor to an extruder, which produces a continuous sheet of dough. Measured amounts of filler (e.g., apple or cherry for strudel) are added, and then the dough is cut and shaped to obtain the final product. Finally, the product is frozen and bulk-packed in boxes for shipping.

“We have had no contamination of the flour and no problems at all,” he says. “All we have to do is perform preventive maintenance once a month and inspect the internal screen once a week.”

Helgason adds that the sifter is easy to clean and service. “It is a Quick-Clean model with two ports on top and a hinged access port and cantilevered shaft at the discharge end, from which we can remove the screen in less than 10 minutes for cleaning and inspection.”

Henry Alamzad is the president of Kason Corp. For more information about high-speed centrifugal sifting, visit kason.com or gourmetbaker.com.