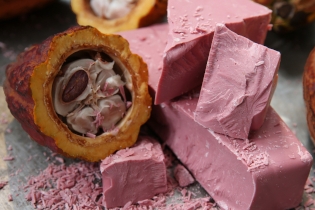 The wait is over: Ruby chocolate is now broadly available in the biggest chocolate and confectionery market, the United States, as well as Canada.

Bakers Journal had reported on the fourth type of chocolate almost two years ago, but as of today, Callebaut announced that it is now available in the United States and Canada.

Barry Callebaut’s ruby has a new and unique sensory profile – a tension between fresh berry-fruitiness and luscious smoothness – unlocked from pure cocoa beans that are specially chosen for their ruby properties, without adding berry flavours or colours.

Peter Boone, CEO & President, Barry Callebaut Americas, said in a press release: “Fuelled by the overwhelming consumer response around the globe, Barry Callebaut collaborated with a small group of pioneering artisans over the last six months to soft launch ruby in the U.S. marketplace. The sales of those consumer products have been very strong. As a result, to help ensure that our business partners have access to the product, we feel that now is the time to take the next step in our global roll-out campaign, and introduce ruby to the entire North American market.”

To obtain a U.S. standard of identity for the breakthrough innovation, Barry Callebaut, therefore, is working closely with the FDA to begin test marketing ruby as a new chocolate product in the U.S., with the ultimate goal of establishing a new standard of identity reflecting ruby’s distinctive sensory profile.

In the meantime, ruby will be launched in the U.S. as ruby couverture. The artisan proposition, Callebaut® RB1 Couverture, will be celebrated at a private chef-led event in Miami, FL, on Monday, May 20; the Food Manufacturer offering, Barry Callebaut Ruby, will be spotlighted at the National Confectioners Association’s (NCA’s) Sweets and Snacks Expo in Chicago, IL, on Tuesday, May 21. Both events will feature chef demonstrations, product application sessions, and sampling.