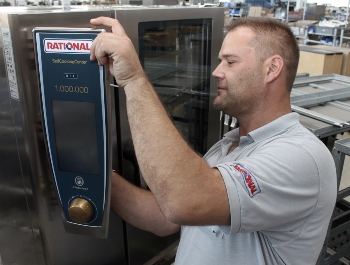 RATIONAL, the manufacturer of combi-steamer ovens, is pleased to announce it has achieved an important production milestone and manufactured one million combi ovens.

The one millionth unit will embark on a world tour before installation at the original Hofbräuhaus in Munich, Germany.

Hundreds of SelfCookingCenter® combi-steamers leave the RATIONAL factory in Germany each day destined for commercial kitchens around the world. This week, a special one millionth unit was produced to commemorate this moment in company history.

“This is a major milestone for RATIONAL,” explains Peter Wiedemann, chief technical officer in a press release.  “When Siegfried Meister founded the company in 1973, nobody imagined how successful it would become within such a short time.”

RATIONAL produced the first combi-steamer just three years after the company was founded, and has continued to advance its technology and product line since that time. Recent innovations include the introduction of the small format SelfCookingCenter® XS combi, and the 2019 Kitchen Innovations Award-winning UltraVent Plus portfolio of ventless hoods.

Today, more than 130 million meals around the world are prepared every day using RATIONAL technology, and RATIONAL leads the combi category with a 50 per cent global market share.

Customer orientation, specialization and unmatched after-sales support in are the not-so-secret ingredients that create a culture of growth and success. From the beginning, the company has concentrated on offering the greatest possible benefit to customers.  “Because our customers are so important to us, it makes sense to share our celebration with our wonderful customers around the world,” says Dr. Peter Stadelmann, chief executive officer.

As part of this celebration, the millionth combi-steamer will be displayed at major trade fairs. The milestone unit can easily be identified by the “1,000,000” written on its gold rotary knob and the customized control panel.  A unit prototype was on display in the RATIONAL booth at the recent National Restaurant Association Show held in Chicago.