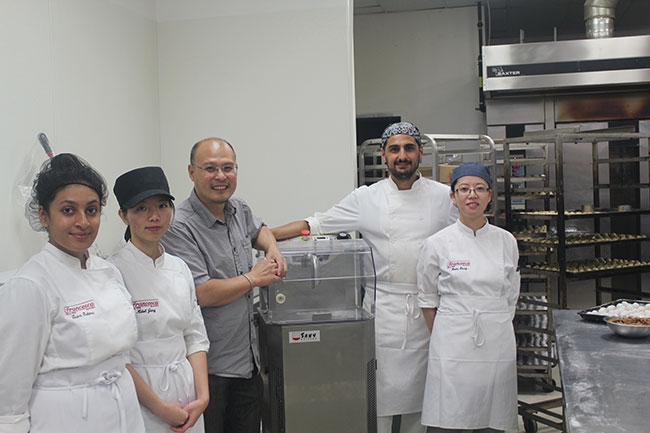 Derrick Pho is a nuclear physicist of chocolate. He builds an exquisite bomb based on molecular science whereupon the atom splits in your belly, detonating a distinct sense of euphoria.

The latest credential in his 20-year playbook? Opening chocoDemy, his chocolate technology centre. Opening in the last year, he is operating the school out of Francesca bakery in Scarborough, Ont., while it gets established. His initial offering includes courses for consumers all the way to expert, and small classes of eight to 10 students with Monday/Tuesday scheduling. People interested in taking courses at chocoDemy are encouraged to call for assistance in determining which class is most suitable.

Pho has taken his years of experiencing a variety of programs and places around the world and funneled them into a back-to-the source curriculum. This means a completely hands-on approach that focuses on the fundamentals of technical skills; how to use technology and knowledge of ingredients. At the heart of it all, is science: understanding the cocoa butter and how to manipulate the food correctly.

“What is the proper way to extract a rose petal flavour — is it cold or hot?” he illustrates, describing the kind of questions that he has encountered in the past 10 years; questions which now infuse the basis of chocoDemy’s programming.

Although Pho can make exquisitely beautiful creations, he says his instruction is based on what can be learnt then reproduced in the kitchen. Practical things. This, he says, is what must be learnt before you can move on to making beautiful things.

Equipment also falls into the zone of fundamental instruction. The centre is supplied by Savy Goiseau and Thermomix. He is excited by the possibilities of his sous vide machine. While one might picture Pho as a boutique craftsman wanting to do every step by hand, he is a passionate and curious chef clearly enthused by the possibilities and business sense presented by technology and industrial production. Which is why, he says, it’s important to get the right tool for the job. He’s seen everything from people buying too powerful equipment for their capacity, to purchasing tire compressors instead of ones intended for chocolate.

“We can spend half a million dollars in half an hour buying equipment, but did we buy the right one?”

This penchant for both the small and big batch scale of production is natural to his sense of curiosity, which he credits for much of his success.

“If you are not curious, you won’t get ahead,” he says in reflection of the traits that have lit his path. It is not chocolate that evolves, he says, but the ingredients and equipment. One must be curious enough to always seek out what is new.

“The second thing is adventurous. Taste: don’t look at the product, taste the product. You might miss out on something. You are entitled to say it’s no good after you taste.”

His third pillar is passion. “If you have no passion then you go nowhere…What is the definition of passion? Not just a chef that love his kitchen, but one that loves the ingredients and where they come from. That’s why a lot of hotels and golf courses now have their own garden.”

For Pho, being curious, adventurous and passionate have been primary over traditional chef characteristics, such as attention to detail.

Pho is the main instructor at chocoDemy, but he has recruited some additional notably passionate chefs, including Sergio Shidomi, pastry chef and head chocolatier at Old Firehall Confectionary and former world chocolate masters contestant, and Michael Cotard, the 2015 Canadian chocolate master.

Trends and job prospects
It is an exciting time to be gaining chocolate skills, and Pho sees the Greater Toronto Area (GTA) as a land of opportunity. There are many fine chocolate shops in Montreal, he notes, but only a handful around the metropolis of Toronto. He says when it comes to chocolate, Toronto is about 10 years behind Montreal and this is in part why he chose to establish the school here and help those west of Quebec.

In terms of trends, he sees chocolate moving past single flavour formulations such as cinnamon and saffron and into more complex spice blends, like a chef in the kitchen would use to make a paella or a pasta sauce. He is seeing a lot of trending that marries savoury and sweet, as well as a bridging of complex eastern flavours and western style cooking techniques like sous vide.

The consumer market is diverse these days, he says, but it is important for all to keep in mind that people are looking for healthier products with fewer calories and less sugar. He says the industry needs to be at the forefront in educating the consumer about what clean label, or organic or fair trade is, and to think critically about these terms.

Pho has applied his own sense of fairness to his additional new venture, Sambirano Valley Chocolat, which specializes in pure Madagascar origin chocolate. He chose to give jobs to people in the community instead of to machines, even though he says it is less productive. The chocolate company is another offshoot of his passion, one that led this time to cultivating chocolate that uses 100 per cent Madagascar ingredients right down to the packaging.

He is challenging himself in new ways by taking his own advice.

“Keep raising the bar. Never, never stop where you are. When you stop, you will get behind.”