News
Protecting the roots of food 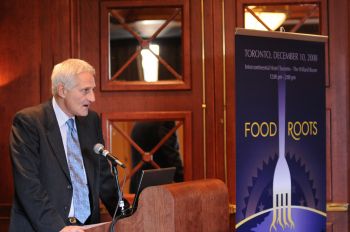 Feb. 16, 2009 – Imagine if another country started playing a sport and called it hockey, but it was played with different rules and equipment. As Canadians, we would be angry that something dear to our nationality and patriotic hearts has been expropriated and misrepresented as something else.

This is precisely what Food Roots, a European cooperative, aims to overcome in the food industry by educating on the importance to local economies of protecting food and its production processes as it relates to designated regions. Specifically, the program, which was presented at a luncheon in early December in Toronto, is spreading awareness of two certifications of authenticity: DOP (Designation of Protected Origin) and GI (Geographical Indication).

One of the main concerns of the Food Roots cooperative is to address the blatant misrepresentation of some products in the marketplace. For example, prosciutto di parma (ham) is a GI product in the EU, but consumers can find parma-style prosciutto with an Italian-looking logo on the grocery shelves. The use of the name can be misleading, certainly, if consumers think they are buying prosciutto from Italy, let alone of the traditional place and method. In effect, it is not the real thing, but consumers are not widely educated on the difference.

The campaign also extends to liquor and beverages: To combat a legal loophole in the United States, the Office of Champagne, USA, is running ads in major publications such as The New Yorker with the message, “Masquerading as Champagne might be legal, but it isn’t fair. Unmask the truth. Demand accurate labeling. Champagne only comes from Champagne, France.” The agency has also started a petition to protect the place and origin of Champagne at its website, www.champagne.us.

Here in North America, bourbon is a prime example of a GI. Although bourbon-style whiskey is produced and marketed in Canada and Mexico as “bourbon,” true bourbon comes only from a region in the state of Kentucky.

While acknowledging that it is not alone in promoting GIs, Italy has more at stake than most, with a European Union-leading 175 agrifood products qualifying for GI recognition.

“We have to accept competition, but we want fair competition. That is the goal of the Food Roots program,” Italian trade commissioner Dr. Paolo Ponti says. “We want to establish fair competition based on market rules … within the framework of the EU.”

Buonitalia Spa, which co-sponsored the Toronto presentation with the Italian Association of Geographical Indication Consortia (AICIG), was launched in July 2003 to organize projects and resources directed at promoting Italian food throughout the world. Chairman Walter Brunello says the Italian community in Canada is a major starting point for the DOP and GI movement.

“The presence of Italian agrifood in Canada is extremely important,” Brunello says. “As it occurs in the U.S.A., the appreciation for Italian quality leads to large-scale imitation of our products with the subsequent problem related to unfair competition and market access of a variety of Italian products. It should be noted that the North American market – U.S.A. and Canada – represents a global turnover of 21 billion euros made up of Italian-sounding products, with a true to counterfeited ration of 10 to one.”

For products to attain a DOP logo, they must show the following as defined by EU regulations: “The name of a region, a specific place or, in exceptional cases, country, used to describe an agricultural product or foodstuff.”

They must also pass a set of criteria that prove origination, and quality or characteristics that are due to the environment with its inherent natural and human factors. The processing and preparation of the product needs to take place within the defined geographical area. A GI certification has basically the same requirements with the lone exception being the entire phase of production does not have to take place within the identified zone.

“The logos are already out there … It is a matter of buyers making the sellers understand that they are looking for these products and for the sellers to identify these products better to these clients. For the retailers as well, in the long run, any restaurant who will state on the menu that the particular product is made with DOP products is giving an extra value and level of service to the Canadian consumer,” Titone says.

“The adequate spreading of the geographical indication system should be useful not only to developing countries, whose economy could be heavily influenced by national and foreign investments in the industrial sector, but indeed each individual and country should be interested in protecting their national cultural roots,” says Fred Kingston, senior advisor, economic and commercial affair, delegation of the EU commission in Canada.

A step beyond products stamped as fair trade, DOP and GI create a more authentic marketplace by protecting each facet of the product’s authenticity.

“We just hope that the program will develop into a second phase, which will be getting Canadian marketing boards, associations and agricultural producers to basically attend special tours and seminars and learn how the local economies can really benefit from developing such denominations and protection for their product,” Titone says. “There is such economic value to the local economies, better fair trade for the farmers, for the producers, and for the benefit of everybody.”