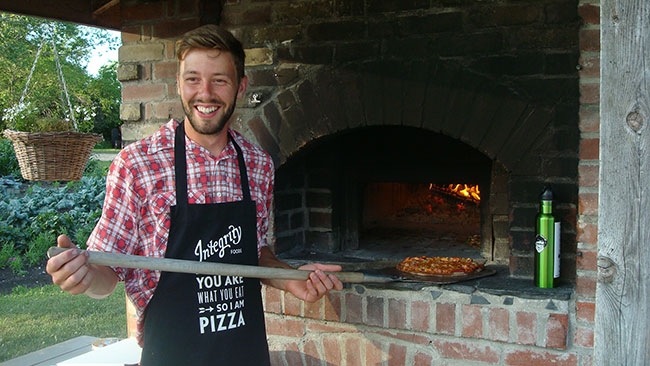 Pizza lovers are dining al fresco in rural Manitoba and it all began with a wood-fired oven named Hildegard.

Hildegard can be found at Integrity Foods, a thriving retail organic bread and pizza business run by husband-and-wife team Dora and Cornelius Friesen on their farm outside Riverton, Man. The Friesens, who started the bakery in the 1990s, built the oven outside during a workshop they commissioned in 2002 from expert baker and oven builder Alan Scott. Scott, who operated OvenCrafters in Petaluma, Calif., wrote The Bread Builders, a seminal baking book they admired.

“Alan told us what materials we’d need to build an oven and we built the oven’s core in a weekend,” Dora Friesen says.

The couple then converted their attached, double-car garage into a retail space where they sold their bread. “Neighbours thought we were crazy,” Dora says with a chuckle.

Scott, who has since passed away, also prepared an organic spelt desem – unleavened or sourdough – starter for the Friesens. “The brick oven and desem starter he created have been the heart and soul of our bakery,” she says. “Pizza night was the outcome of our desire to share the gift of this oven.”

Pizza sales make up about 25 per cent of their sales. Pizzas are made on weekends from the third weekend of June until the third weekend in November. “It’s our summer,” Dora says. “People drive out from Winnipeg – a two-hour drive – especially to visit the farm.”

In 2009, they built a second oven indoors that they christened Cora – a combination of their names, Cornelius and Dora.

The pizza crusts, which are made from this starter, contain organic whole-grain spelt flour, water and sea salts. Sourdough spelt is what sets their crust apart, Dora says. “People were asking for naturally leavened bread.”

There was a learning curve with the oven. “We had to learn quickly,” she says. “The pizzas bake quickly and transferring them to and from the oven was tricky.” After a chaotic “oven-warming” evening that saw hundreds of pizzas going in and coming out of the oven at breakneck speed, they realized the answer to their efficiency problem was prebaking the crusts and bagging them in bulk so they’re ready for topping.

Customers fall into all age groups and they spread the word about this hidden gem. “Some families have come out for years, and now their children come,” she says. The business is listed in the county’s travel guide, which helps attract tourists. They are not on Facebook but they do have a stylish, descriptive website (www.integrityfoods.ca) created by summer graphic design students who visited the farm.

PIZZA AL FRESCO, CANADIAN STYLE
On pizza night, guests are encouraged to relax, tour the grounds and have a picnic on the farm.

Although the Friesens have a retail store where they sell bread, they don’t have an indoor restaurant space. However, a gazebo with tables, chairs and umbrellas ensures diners stay dry as pies are pumped out, rain or shine. Some people spread out blankets on the ground.

Visitors may quench their thirst with water, coffee and iced mint tea made from mint grown in the garden, or purchase soft drinks. Some bring their own drinks and salads, she says.

The experience is kid-friendly, with lots to keep all ages busy when not eating. There are play areas for torpedo ball and soccer, a forest trail, photo albums to browse and a vegetable garden to explore. Dora is always on hand and ready to talk with visitors about homegrown and local food.

Animals share the space with humans – including an alpaca, birds, sheep, rabbits, goats, chickens, ducks, geese and a friendly silkie rooster named Elvis. The family dog sits nearby looking longingly at guests and their pizza. “And kittens – there are lots of barn kittens every year,” she says. “We’ve had some adoptions.”

PICK-YOUR-OWN PIZZA
Most of the vegetable toppings come from the farm, and as you might expect, there is an emphasis on using local products. At one time bison was a topping choice, but with prices so high at the moment they have switched to grass-fed beef, Dora says.

Perhaps their best-known pizza, and Dora’s favourite, is the Garden Special. People are given a basket and encouraged to walk the garden, filling their basket with whatever vegetables they choose.

They then bring their selection to the oven area where staff use them to create a pizza that is about as custom-made as they come. The veggies are added raw but Dora thinks in the future they might create a station to cook the toppings before they go on the pizzas.

What are the most popular vegetables? “People seem to like the beets,” she says.

THE TEAM
Although the Friesen children have grown and gone on to other careers, the business is still very much a family enterprise.  Son Jason and brother-in-law Dwight spent several years as the main bakers and now help as needed. Daughter Debbie is their accountant and advisor. Cornelius mills the grain, fires the oven, and on baking days does most of the brick oven baking.

Dora works in the bakery, tends to the garden and handles agri-tourism. She describes her role in the business matter-of-factly as “the head that steers everything and directs the affair.”

They currently have two bakers on staff. Staff get a nice perk, she says: “their own pizza picnic each night after everyone else is happy.” That’s where they experiment with new pizzas, she adds. They’ve been thinking of putting a chef’s choice pizza on the menu for August. “Visitors could tell us what they don’t want or can’t have on their pizzas – the rest is up to the chef!”

One challenge that comes with running a rural food business two hours from most suppliers in Winnipeg is the need to think ahead and stock up on perishable supplies.

“If we run out of something, for example, the Bothwell cheese we use, we’re in trouble,” Dora says. Supplies are delivered once a month, and although they have a freezer, it’s a balancing act between being overstocked and running out of ingredients.

A PLACE OF LEARNING
The bakery and farm have become a hub for learning over the years, drawing post-secondary students from a school in France who have boarded with them every year until the last year for a three-month work placement from July to October. Among other requirements, the students must develop a new product. Last summer, they created a dense cake they would typically have in Brittany, France, with some fruit layered into it, Dora says. Pizza was one of their favourite items to experiment with, she adds. “Previous students developed a pizza that was representative of foods in their own French tradition.”

What’s in store for the business? A little less hustle, if Dora has her way. With the wholesale baking division in transition to become a year-round operation that her daughter Judith and her husband, Dave Newsom will run from a bakery in Winnipeg, the “head” of the business anticipates having more time to grow the pizza side of the business and enjoy the fruits – and vegetables – of her labour.

Next summer she plans to develop more products. They’ve been primarily a bread bakery, specializing in spelt/sourdough, and occasionally cookies and cakes.

She also would like to host more pizza-related events and farm tours. She looks forward to devoting more time to their Artisan Baker for the Day, a workshop that lets participants learn about whole grains, methods and benefits of milling fresh flour, different styles of breadmaking, and baking in a wood-fired oven.

For all of the Friesens’ business savvy, you get the distinct feeling Integrity Foods is not only a livelihood but also a philosophy of life and of food. That philosophy emphasizes the health of people and their environment and includes the use of quality ingredients that are organic, local and affordable, if possible.

“As people are becoming more informed about food and how it’s grown, I think they’re making choices that make a statement,” Dora says. “They want to know it’s not only good tasting but that it was grown in a very good way, and then prepared in a very pleasing way as well.”

“Our pizza prices are fairly high, but we know it’s not only a pizza, it’s an experience. But we don’t apologize because we know we are choosing quality and for people who want the quality, they will come.”