A baker by accident finds her path 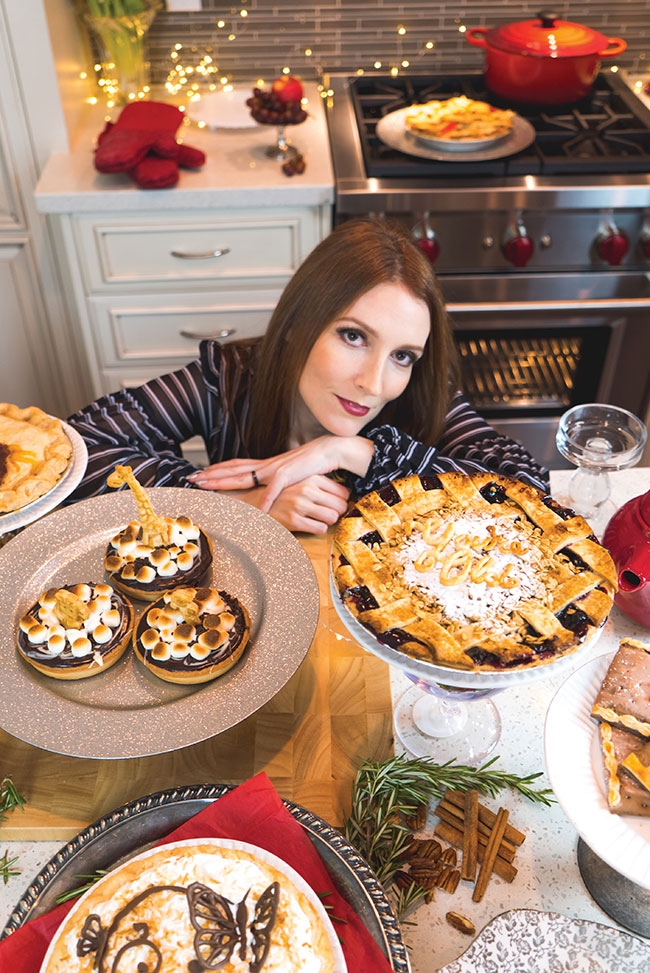 Prior to designing 3D piescrapers and celebrity pietraits, Jessica Leigh Clark-Bojin, the creator of Pies Are Awesome, said she had never baked a day in her life.

“I couldn’t even crack an egg,” Clark-Bojin laughed. Known on Instagram as @thePieous, the Vancouver based pie-artist has managed to launch a successful business and build her reputation as a world-famous pie-artist, all without any formal training and without actually selling pie.

So why pies? As a new year’s resolution to live a healthier lifestyle but still satisfy her cravings for the sweeter things in life, Clark-Bojin set out to bake pies as an alternative to cakes and other treats.

For her very first pie she bought Classic Crisco shortening crust, made an apple cheddar pie and topped it with a fire-breathing dragon she added by colouring the dough.

“My friends and family thought it was cool and so encouraged me to keep baking and posting online,” she said. On April 20, 2016 Clark-Bojin posted on Instagram that she was a baking newbie “that had developed a pie making habit and wanted to share her assorted triumphs and shameful failures” on the social media platform. At the time when she browsed the web for inspiration there was no shortage of amazing cake, cupcake and macaroon designs, so she found it odd that no one did anything fancy with pie.

When she asked friends in the industry, including veteran bakers, why this was, she was told that pie was “difficult.” It’s unpredictable and to work with pie dough one needs to work quickly, they told her. Armed with no experience in the kitchen, she took it as a challenge to come up with techniques and hacks to create the most epic pies ever seen. Fast-forward two years and her Instagram boasts 15,400 followers, she has had 46,411 views on her YouTube channel, made TV appearances on shows such as ABC’s The Chew and rocks the internet with her creations going viral on many occasions.

Clark-Bojin is no stranger to art. In her life before pie, she was a filmmaker, designer, teacher and sculptor. The fine art major has worn many hats in the B.C film industry. In 2016, her first feature film Charlotte’s Song won five Leo Awards (British Columbia screen awards). While working on her second film, her friend and early contributor to her business told her to take “the pie thing” seriously.  In order to validate her business idea with the market Clark-Bojin took her project to Kickstarter, an online crowd-funding tool for creatives. With a grand total of 599 backers, she raised $32,146, surpassing her funding goal by a whopping 1,600 per cent. Initially she wanted to raise just $2,000. With this money Clark-Bojin was able to bring her pie-baking tools to the world. Clark-Bojin has since quit film to focus on pie full-time and has made it her mission de-mystify the belief that pies can’t go head to head with wedding cakes and other fancy desserts

If you fancy a unicorn or a rocket ship as the centrepiece of your pie, Clark-Bojin created pie guides to make pie crust designs quick and easy. Powder guides are similar except they come with an additional thinner stencil that allows you to add finer details. Combined they can allow literally anyone from novice to expert to be able to produce their best pie art as they speed up the process of creating designs in pie dough.

With no formal training in baking, Clark-Bojin said her skills came from lots of experimenting. As challenges arose Clark-Bojin kept a log of “happy accidents.” She studies the properties of the ingredients to make them work for her, rather than against her. For example one of her favourite pie hacks is to add vanilla wash to pie dough to help the details stand out.

Always one to share, Clark-Bojin gives most of her knowledge and content away for free on her social media or on her blog. There are no pie-decorating secrets between her and her pie-oneers (a term she coined for the pie-art community). She shares all her tricks and techniques and also enjoys seeking out inspiration from other pie-artists. Along with her loyal pie-oneers, Clark-Bojin continues to bust the myth that pie-art doesn’t exist. Name a celebrity, cartoon character, holiday theme and she will be able to come up with an original pie, if she hasn’t already done so. Everyone from Oprah Winfrey to Harry Potter has inspired one of her pie creations.

At the beginning of 2018 she started to focus on posting more content online and engaging in meaningful conversations with her followers.

“Social numbers are tricky but from comments you can tell exactly what [your followers] are talking about,” Clark-Bojin said.  She always takes requests and recommendations from her comment section.

To be influential on Instagram and other social media, she recommended staying focused on making good content people are excited about.

“Current trends in pop culture are always a hit,” Clark-Bojin said. She also suggested bakers do some digital community building. “There is no pay wall between me and the pie art community. Build a community around your art.”

Once in a while she will make a nerd pie just for herself and her community.  Like her glow-in-the-dark Tron-inspired Easter egg pie she made dedicated to the release of the new “Tron light cycle” set from Lego. When she isn’t trying to reinvent the pie, Clark-Bojin is an Adult Fan of Lego (AFOL). She also enjoys comics, watching movies with her son and eating lots of pie in her spare time.

Because she doesn’t sell the pies she is showcasing, Clark-Bojin said she generates revenue in three ways. She sells her baking tools, her cookbook called Pie Modding – How to “Epic-Up” Store Bought Pies and Be the Hero of the Party, and from commissioned videos she has created for the Food Network and Cooking Channel that have garnered millions of views. In the future she plans to release more cookbooks to continue sharing new techniques.

As for making her pies available for sale, Clark-Bojin said she’s more interested in teaching people how to recreate her magical desserts at home. She plans to do this by focusing on creating more simple tutorial videos that will continue to tackle the misconception around pie baking and its degree of difficulty.

By simply re-imagining the traditional dessert, Clark-Bojin has managed to combine all her passions, interests and talents into one job. That’s why the entrepreneur encourages fellow bakers to experiment.

“Get over the fear of trying new things and failing,” she said. “Don’t be afraid to make a big mess!”

5 of Jessica’s favourite pies in 2018 (@thepieous/Instagram)