Instagram is a key player in cake trends for 2017 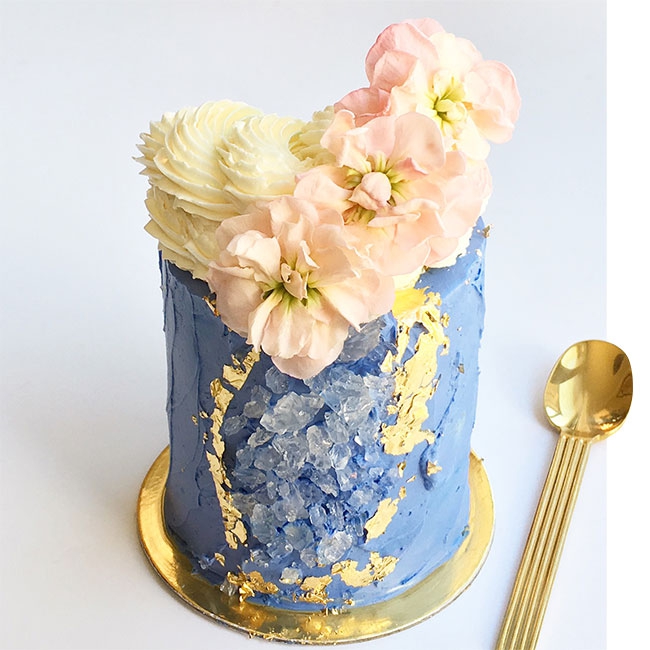 A cake made by Jyoti Nanra, owner of The Purple Cupcake in Toronto.

Connecting with 120,000 to 150,000 customers per day might have seemed impossible in our pre-social media world, but for some of Canada’s top cake-makers it’s a reality they enjoy daily. Instagram has become a pivotal platform for cake designers to showcase their works of art and is now playing a starring role in highlighting cake trends for the coming year.

Jenna Rae Cakes in Winnipeg is a boutique cake store that has amassed more than 150,000 followers on Instagram since opening its doors in 2014. Owned by twin sisters Jenna and Ashley Illchuk, the business has come a long way from when Jenna began making cakes in her apartment six years ago. “I started working with fondant and realized that I was pretty good at it and it started taking off, so I rented a commercial kitchen and it got so crazy that I had to either open a bakery or stop what I was doing, so I decided to open a bakery,” says Jenna, head cake designer at the popular cake shop.

Ashley, a graphic designer and photo stylist, has helped Jenna Rae Cakes skyrocket. With her background in photo styling, she has built the company’s brand and social media presence, promoting Jenna’s stunning cake designs to the world.

Another self-taught cake designer and Instagram success story is Jyoti Nanra, owner of The Purple Cupcake based in Toronto. Nanra also began her business in 2014 and now boasts more than 121,000 followers on Instagram. Her popular designs have caught the attention of some big clients, including Saks Fifth Avenue, Grey Goose Vodka and Pussateri’s Fine Foods. It’s a big change from her days spent as an English school teacher, a job that she pursued for just a few months until her passion for baking took over.

Nanra works out of a commercial kitchen and has no plans for a bricks and mortar location anytime soon. “My plan is to travel and work in different places around the world, so I don’t want to settle down in Toronto with a storefront yet. I enjoy doing custom orders and designing from my heart, something specifically for someone. I feel like if I had a storefront, I don’t know if my designs would be quantity over quality,” Nanra says.

Building her Instagram account has been crucial to her success. By mastering a photography style unique to The Purple Cupcake, Nanra says people could easily find her company on the social media platform.  “Photography is one of the most important things to have under your belt. I had to find a way that I could take a picture of something that people would want to repost. I wanted to create a feed that is pleasing when you’re scrolling through. And constantly uploading photos, at least once a day, keeps you in touch with your fans,”
she says.

While initially Nanra’s traction on Instagram was gradual, she says she has seen a big uptick over the past year with several hundred new followers every week. And it’s the followers on these types of mega-Instagram accounts who will be placing orders and driving trends for 2017.

In Toronto, Nanra sees the next year being “a season of florals,” while in Winnipeg, Jenna is predicting an edgier undertone than in previous years. They both agree that bright colour palettes will be at the forefront of customer demand.

“I think people are going to start moving away from the blush and gold trend and move toward moodier colours and be a bit more fearless with their colour choices,” Jenna says. “Obviously wedding cakes will always be soft and romantic, but I think they’ll be edgier and outside of the box. That’s what I’m hoping for.”

So just how much will colours pop this year? Jenna says to expect deep burgundies, emerald, royal blue, light blue and marble to be popular choices.

A cake made by Jyoti Nanra, owner of The Purple Cupcake in Toronto.

Last year’s love for metallics is still going strong and will continue throughout 2017. “I think metallics will definitely stay, because a lot of people like gold and silver leaf,” says Nanra. “When you’re using a colour palette, the metallic breaks it up and gives contrast on the cake, whether it’s gold leaf or metallic glitter.”

In Halifax, Jennifer Harrison, owner of Layers Wedding Cakes, is seeing the same trend. “Brides of 2017 love metallics and it has to be an edible element, not a ribbon or linen underneath the cake or cupcakes. Lustre dusts and vodka or lemon extract make a perfect cake paint that can be used for many different techniques,”
Harrison says.

An accomplished cake designer, Harrison has been designing and creating wedding cakes since 2004 and has honed her craft with the likes of Wendy Kromer of Martha Stewart Weddings and Betty Van Norstrand, couture cake designer and sugar flower master in New York City. This year, Harrison is seeing brides and grooms exploring the idea of a wedding cake table. “There will always be the demand for the stacked wedding cake – elaborate or not, it is beautiful and always fits in – but a lot of our clients are requesting single or two-tier cakes and multiples of them. They want varying sizes and heights, always round in shape, and usually covered in buttercream with different textures and designs that are all complimentary to each other.”

Turning to speciality cakes, an unexpected demand for unicorn-shaped cakes is adding some whimsy to parties across Canada. In Winnipeg, Jenna receives orders for two to three unicorn cakes a week, while in Toronto, Nanra says it’s a trend she’s excited about. “Right now unicorn cakes are in and I absolutely love them and think they’ll stay for 2017. Whether they’re doughnuts or cakes, I think the unicorn is so fun and people love the idea,” Nanra notes.

With enticing colour palettes, mouth-watering flavours and yes, unicorns, cake-makers across Canada will be redrawing the boundaries of cake design this year, spurred on by their throngs of Instagram followers.