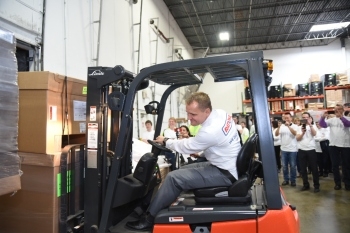 Apart from being the first manufacturer in North America to cross this milestone, year-over-year shipments in 2018 show an increase of 50 percent over 2017, exceeding category growth rates. Rational Combi oven market share is estimated at 45 percent in the United States and 65 percent in Canada, demonstrating clear customer preference for the Rational brand.

Rational employs 150 people focused on the Combi oven market segment in the United States and Canada. “At the beginning of the year, shipping over 10,000 units was our goal. Today I am proud to say that we surpassed it. The North American team’s determined focus on delivering unmatched customer benefit enabled us to grow our business across all customer segments. We have a tremendous amount of momentum, and as Combi technology gains greater acceptance in our market, we anticipate further growth,” said Markus Glueck, executive vice president of Rational North America in a press release.

In 2018 alone, nearly 33,000 chefs and commercial kitchen operators and more than 7,000 culinary school students, were introduced to the Rational SelfCookingCenter®. The Rational Culinary School Initiative prepares future chefs for the next generation of culinary excellence.